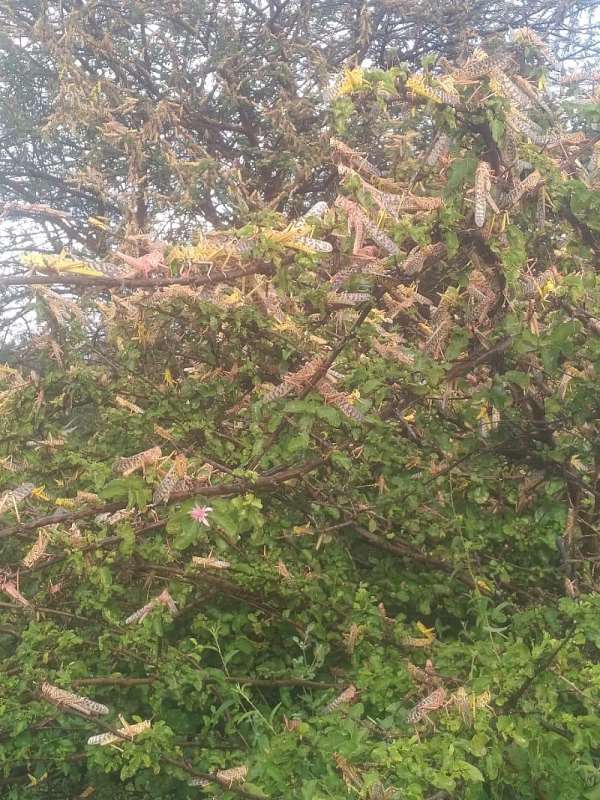 Desert Locusts are causing havoc in parts of Africa.

Mithika Mwenda, Executive Director of the Pan-African Climate Justice Alliance (PACJA), in an article, has urged African governments to fight the locusts’ invasion to avert food security crisis on the continent.

Read his full article below:
The Pan-African Climate Justice Alliance (PACJA) is greatly alarmed by the invasion of desert locusts now affecting residents of several counties in Kenya, Ethiopia, Somalia, as well as pockets of Djibouti and Eritrea.

The skies are stuffed, the grounds littered and ugly, while what was to be beautiful vegetation and easy access to crops and pasture, thanks to the return of rains in some previously arid or semi-arid areas, has now left a bad taste and sight, for many residents. Besides, the worry that the desert locusts might not leave soon, and the fact that many may be faced with dire food situation after their crop and pasture is destroyed, cannot be overemphasized.

In other words, the Horn of Africa is under siege from the insect described by the Sciencedaily as “an invasive species that is both well-known and feared because of the large-scale agricultural damage it can cause”.

This is a sad situation, a serious threat to food security for the continent, especially the Horn of Africa that is facing its worst locust invasion in 25 years, according to United Nation’s Food and Agriculture Organisation (FAO).

The sad thing about this looming disaster is that there have been warnings and updates by FAO in its forest locust disaster watch from as early as June 2019, when the invasive and destructive insects affected parts of Saudi Arabia and Yemen, and moved further South of the Red Sea.

FAO stated in the desert locust watch that the insect actually had a field day, undetected, between June 2018 and March 2019 in the Empty Quarter of the Southern Arabia Peninsula following heavy rains that gave favourable breeding grounds for at least three generations of the insects.

Here, we can say, all were caught off guard.
The world should have, however, woken up to this threat when, in January 2019, the insects spread from the Empty Quarter of the Southern Arabia Peninsula and attacked Yemen, Saudi Arabia and later parts of Iran, where longer lasting heavy rains had also created a favourable environment for their multiplication and migration to larger areas of the stated countries until June.

The trend continued, and, the insects went far and wide, affecting Indo-Pakistan (from Iran) and further to the African continent through Somalia and Ethiopia (from Yemen) between June and December 2019.

Since then, there have been warnings for the African states, including Kenya, where the invasive desert locust has begun to damage crops, occupy the air space, litter the environment and just be a nuisance and distraction to the daily goings on of citizens.

Besides Ethiopia, Somalia and Kenya, Eritrea and Djibouti have had their share of the plague. Sudan has not been spared. South Sudan and Uganda also risk this invasion.

Somalia’s case has worsened this whole issue because insecurity limited proper response to invasion, and the desert locusts had a field day. It tells us how key peace can be, even in times of disaster.

The direct link of this disaster to climate change is the unpredictability of rain patterns. The rains are heavier and lasting longer than usual or expected, and the ensuing greenery is what entices the otherwise slow breeding insects (in calm deserts) to be more active and fast in reproduction.

The need for the world to take the climate crisis seriously cannot be gainsaid; action needs to be taken right now.

The desert locust disaster is coming at a time Africa is still reeling from other effects of climate change that include disastrous landslides, floods, drought and cyclones. These have dragged the affected economies, as beside massive loss of lives, infrastructure is destroyed, families split when migration is unavoidable (always affecting the education of many children), economies are strained because finances have to be diverted to emergencies and rehabilitation, and momentum for growth slowed down as attention shifts to the disasters. Following heavy rains in Kenya’s Kerio Valley last December alone, more than 50 human lives were lost, families displaced and livestock killed as a result of mudslides. The heavy downpour also saw three irrigation schemes – Weiwei, ESP Tukou Sangat and Marich pass - destroyed. Now attention has to shift to resettlement of the displaced, rehabilitation of water canals and other social amenities and other systems destroyed. This is not the worst that the eastern part of the continent has suffered.

There is no more time to waste, but to take our lives and environment seriously, as this invasion is likely to worsen an already bad food security situation.

The need for research and follow-up on their recommendations, plus implementation is essentially important. Close monitoring and preparedness for any event of the locusts’ invasion must be sustained. Had the relevant authorities been keen on the FAO warnings, there could have been better planning for the army of insects, which would have reduced the extent of invasion or just destruction in agricultural areas.

But the desert locusts’ invasion has exposed our worst in terms of preparedness for disasters and response. We watched and waited as the insects flew into the continent in their droves, only to welcome them with claps, whistles and gun shots that have not done much to scare them away. We have heard of clangs of stones against pans, honking horns and chants. There have even been mentions of tear gas being used on the insects. They must be getting entertained!

The aerial spray that a lot of affected nations are now applying, though unfriendly to the environment, may work. A lot of the other methods only help to push the insects to other regions where weather conditions aid environments that favour their survival and multiplication.

Since the desert locusts are an agricultural shock, the African continent might soon be staring at a serious food crisis right in the face. Agriculture is the backbone of many African economies, a source of food for every nation, and an enabler of several other sectors. Look at it this way; if the locusts mess food crops and pasture for a community, then planting may not happen immediately because not all rely on irrigation, but watch seasons to plant. If talking about cash crops such as wheat, rice, khat, coffee, cotton or tea, then clearly industries will be affected. On a more smaller scale, when hunger hits, a child will be forced to forego school to search for pasture for the family’s livestock or go to search for wild fruits. Some may be forced into child labour to help fend for their families. A woman will be forced to work harder to put food to the table, while her husband, not willing to see his cows and goats die of hunger, may invade someone’s watering point, where he might be caught and a conflict begins. This is not all.

Yesterday, reports indicated that an Ethiopian Airline B737-700encountered the locusts’ swarm on approach to Dire Dawa Airport (HACR), and the pilots had to divert to Addis Ababa. The sight of the plane’s nose was ugly.

In dealing with the locusts, we should first accept that we have been caught flat footed and forge ahead with an intensive multi-thronged response. If declaring the invasions a national disaster could help nations give it more attention, then that should happen faster. Politics can be put on hold and relevant departments and ministries made to give the problem the attention it deserves. This is critical.

Countries and sub-national entities can join hands and tackle the problem, especially around border points. This is already happening in Kenya, where one Laikipia County is already working with affected units like Samburu and Isiolo to forestall invasion. They have enlisted the services of airlines to see the work done. This can be done between nations, for the good of all. Dealing with the insects is an expensive affair, and joining hands would help lessen the burden.

The scary facts about the desert locusts should remind us of the danger at hand. The insects, according to studies, can devastate agriculture because of their ability to change breeding patterns based on their environment. For the desert locusts, good food and shelter will automatically lead to high survival. They also attack fast. For the period they have invaded Ethiopia and Somalia, more than 70,000ha under crop has been destroyed. In a day, the locusts can destroy food enough to feed at least 2,500 people, according to studies.

The insects can also cover very long distances in a short time. FAO says swarms can travel up to 130km (80 miles) per day - a kilometre-wide (half-mile-wide).One swarm, the UN organisation says, can contain up to 80 million locusts.

One remedy to the invasion would be to harvest the hoppers, process and export them to places where they are a delicacy. It is said that the insects, as food, are good for the heart, as they contain sterols that have cholesterol-lowering properties that reduce heart diseases. But since we have been ambushed, even this may not be an option.

Let us not take lightly the locusts’ invasion, because a generation may just be affected in a way that we might forever regret. The comical ways in which Kenyans responded to their Agriculture Minister Mwangi Kiunjuri’s calls for citizens to post images of the deserts locust, if spotted for the Government to confirm, should be a statement that Africans want seriousness on matters touching their lives.

The Kenyan, Ethiopian and Sudanese governments should, however, still be commended for the work already done, through ground and aerial control operations to ward off or destroy the desert locusts. They must, however, be encouraged to heed this call by FAO: “All efforts are required by national authorities to undertake regular surveys, timely reporting and efficient control, and to upscale these activities in the coming weeks and months”.

This is our continent. Let us save it from preventable disasters such as this desert locust invasion.

About the writer: Mithika Mwenda is one of the founders of PACJA, an organisation that is present in 45 African countries. He is the 2019 winner of the International Earth Care Award and has been named one of the 100 Most Influential People in Climate Policy by Apolitical.