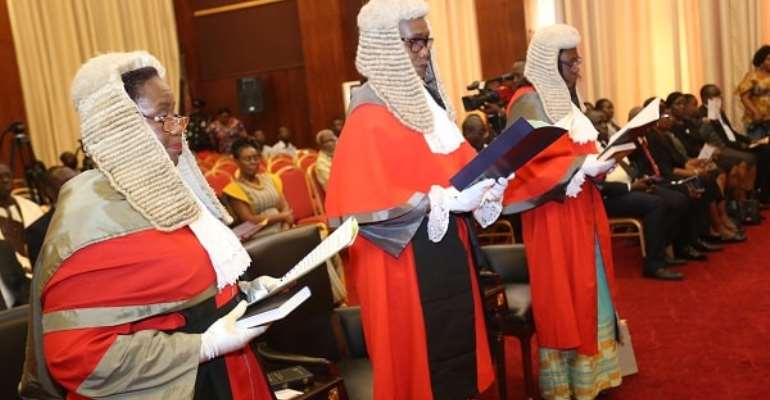 President Akufo-Addo Tuesday swore in three female Supreme Court justices to replace justices of the court who have gone on retirement.

The new justices — Justice Mariam Owusu, Justice Avril Lovelace-Johnson and Justice Gertrude Araba Baaba Torkornoo — swore the Oath of Allegiance, the Judicial Oath and the Oath of Secrecy, after which they were presented with their instruments of office by the President.

The trio, from the Court of Appeal, went through rigorous nomination and confirmation processes, initiated by the Judicial Council on behalf of the President and undertaken in consultation with the Council of State, with the approval of Parliament.

Profiles
Justice Mariama Owusu
The 65-year-old Justice Owusu, who hails from Beposo in the Ashanti Region, comes to the Supreme Court with 38 years’ experience at the Bench.

She was appointed to the Court of Appeal in 2006, where she had been until her nomination to the Supreme Court in November.

She had her GCE Ordinary and Advanced levels at the Wesley Girls’ High School, Cape Coast, and the Aburi Girls’ School, respectively.

From December 2005 to 2009, she was assigned by the Commonwealth Secretariat in London to The Gambia as a Justice of the High Court, where she also acted as an additional Justice of the Court of Appeal.

Justice Lovelace-Johnson started as a District Magistrate before rising to become a Circuit Court judge from June 1994 to June 2002.

She has held several leadership positions, including former Director of the Public Complaints and Courts Inspectorate Unit of the Judicial Service of Ghana, Vice-President of the Association of Magistrates and Judges of Ghana and former Honorary Council Member of the Planned Parenthood Association of Ghana.

Justice Gertrude Torkornoo
A native of Winneba in the Central Region, Justice Torkornoo was born in Cape Coast on September 11, 1962 and had her ‘O’ Level at the Wesley Girls’ High School and ‘A’ Level at the Achimota School.

She completed the Ghana School of Law in June 1986.

She also served as a volunteer at the FIDA Legal Aid Service and did an internship at Nabarro Nathanson in London.

She was also a pupil associate at Fugar & Co., a law firm in Accra, before she returned in 1994 to become its director.

She became a Justice at the High Court from May 2004 to October 2012, before she was elevated to the Court of Appeal from October 2012 to date.

Some of the leadership positions she has held are Supervising Judge, Commercial Courts; Chair, Editorial Committee of Association of Magistrates and Judges; the Chief Editor for the development of Judicial Ethics Training Manual; Vice-Chair of the E-Justice Steering/Oversight Committee and Vice-Chair of the Internship and Clerkship Programme for the Judiciary.