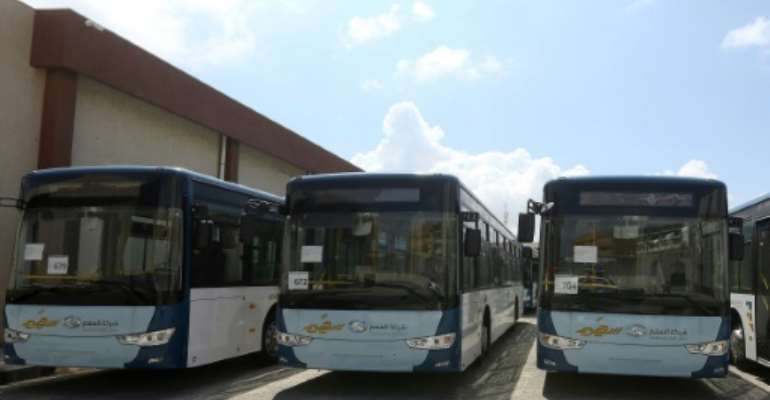 Public buses are returning to the streets of the Libyan capital for the first time in three decades. By Mahmud TURKIA (AFP)

Parked in a hangar in downtown Tripoli, some 35 buses awaited this week's launch of a new urban public transport scheme -- the first in the Libyan capital in three decades.

Imported from China, the brand new vehicles will make their first trips in the coming days, across a city that for six months has lived with the deadly rhythm of combat in its outer suburbs.

Since April, eastern strongman Khalifa Haftar has been battling forces loyal to the UN-recognised Government of National Accord for control of Tripoli.

Equipped with wifi and air conditioning, the blue and white buses will run 20 routes, from Janzour 15 kilometres (nine miles) west of Tripoli to Tajoura, 12 kilometres east of the city. Another route will travel 25 kilometres south to the airport (though the facility is not operational).

Transport company Al-Sahem -- whose name means arrow -- wants residents to re-embrace public transport as a way to reduce congestion in this Mediterranean city where urbanisation sprawls along the coast.

"We urgently need to re-establish public transport services in Tripoli, a city that has suffered in its absence," he told AFP.

The system will "prioritise workers who need public transport the most... reducing congestion during rush hour," he said.

Every day, Mohamed al-Bouzedi commutes via minibus or ancient taxi from his home in Janzour to his clothing shop in town.

"There hasn't been public transport in Tripoli for decades ... this project will be really helpful to residents," said al-Bouzedi, whose journey is often punctuated by breakdowns and traffic jams.

Tripoli's streets are notoriously clogged with three million vehicles in a city of two million people, where petrol costs 10 cents a litre. By Mahmud TURKIA (AFP)

"Modern buses should help me get to my shop in less time. I'm eager to try it," he said.

Until now, those without a car have had the choice between taking a taxi or relying on rundown private minibuses -- known locally as Ivecos after their manufacturer -- which ply the main roads.

Selecting the capital for al-Sahem's pilot project was a logical choice, Qormane said: "A third of Libya's population lives in Tripoli and its roads present no great challenges, beyond a general disregard for the road code."

After launching its Tripoli project, Al-Sahem hopes to introduce intercity lines, in particular connecting isolated southern cities dotted across a vast desert landscape in a country of more than 1.7 million km2.

With fighting still imperilling certain districts around Tripoli, shopkeeper al-Bouzedi worries for the future of a public bus project.

"The situation on the outskirts of Tripoli, particularly in the southern suburbs, is bad. Rocket fire is indiscriminate and unpredictable. It would be tragic if a rocket hit a bus filled with 40 passengers," he said.

In an oil-rich country, where subsidised petrol costs about 10 cents a litre (less than bottled water), the average household owns two to three cars.

In Tripoli alone, the number of privately-owned vehicles has more than tripled in less than a decade, jumping from 600,000 in 2010 to two million this year.

Together with municipal vehicles, taxis and minibuses, the number rises to three million -- in a city of two million inhabitants.

But if buses will be a boon for most citizens, some taxi drivers worry for their future earnings.

Abdel Mohayem fears he could be forced to sell his cab if his passengers prefer the bus, the driver told AFP.

"Many will be affected by this project... even if it does reduce traffic jams and travel time," he said.