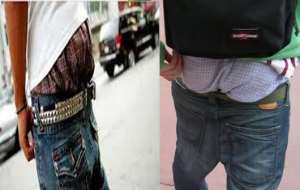 Sadly or should I say to my utter dismay, some cherished cultural values in the Ghanaian society in the past are gradually if not swiftly giving way to what was deemed as social deviance. Even though the culture of a people is dynamic and therefore susceptible to change, such changes must not deviate so much from the acceptable norm and if they do, they must become a matter of concern for society especially leaders to deal with. The germane factors to such social deviance must be well analyzed and defined so as to proffer an appropriate panacea that is lasting and not any cosmetic solutions that will just scratch the surface of the problem’s root causes.

Sociologically, social deviance connotes an action or a behavioral disposition that violates social norms or rules approved by society. It basically means doing things society frowns on even if there is no defined harsh punishment for it. Sometimes, the disciplinary action that follows a socially deviant behavior is as simple as scolding, stunning looks or a grimace or a warning, but the socialization process is such that even such simple corrective actions are adequate to deter a socially deviant person from repeating the act or misconduct. For example, a well socialized person who is scolded for farting with a thud in a meeting or a public place may feel ashamed and will not repeat the act especially if he or she has a sensitive conscience. Such important values that society cherishes are very pivotal in keeping societal members in check even in the absence of laws to check a given social deviance.

We have observed to our dismay that reproductive patterns have changed so much over the years due to teenage pregnancy and we seem helpless under the circumstance. A teenager in my view is a young person whose age is in the teens i.e. from thirteen (13) to nineteen (19) years even though the term is equally used to describe young persons in general.

As a matter of fact, the ugly scene in most labour wards of various health facilities across the nation is such that even girls below the teenage get pregnant and the paternity of the pregnancy is traceable to another person below teenage or at teenage.

There is a portion of the population the health facilities refer to as women in fertile age (WIFA). Generally, a woman is an adult human female but the delivery records of our hospitals show that in contemporary times, the WIFA population has become inclusive of children from as low as 10 years to 12 years becoming pregnant and giving birth at hospitals or presenting with uncompleted abortion. This is not a pleasant situation at all.

In the past, a woman who was referred to as grandma or nana or maama was of age and would perhaps be in her 50s , 60s or would be an octogenarian. Such a woman had experienced life in various forms and represented good counsel to her grandchildren. The same applied to their male counterparts.

But let us look at the sad situation of 11-year-old girls and boys becoming parents at that very tender age. In the next 11 years, that 11-year-old girl who became pregnant may have her baby growing to become an 11-year-old and she the mother would be 22 years. Should that trend continue unfortunately, her daughter will also be pregnant at 11 years hence at 22 years with little experience in life, the 22-year-old lady becomes a grandmother. The rhetorical question is that who will counsel who?

Perhaps the sagging dressing among the youth in recent times can be traced to such unfortunate reproductive patterns described ut supra. Basically, sagging dressing means wearing one’s pant or pair of trousers below the waist thereby showing undergarments. Whereas people say that sagging dressing started from the prisons and that sagging was a form of indication that the sagger was sexually ready for other prisoners, sagging in the Ghanaian society has been attributed to Otto Martin Pfister, a former German coach of the Black Stars Football team. Mr. Pfister is often dressed virtually in a sagging way due to his stature but his way of wearing pants became admirable by some people in the Ghanaian society who choose to blindly mimic his way of wearing trousers. In fact, sagging dressing has been named Otto Pfister in Ghana and the situation is now virtually worse.

Most of the youth especially males are seen wearing their trousers and shorts below the waist line and without belts thereby exposing their underpants or boxer shorts. They walk with difficulty when the pair of trousers falls further away by gravity and they keep pulling it up. They are in need of waist belts but they will not use one even if it is gifted them. What way of life could this be?

What is so disgusting and an eyesore is that most of these guys who are into sagging or Otto Pfister dressing expose very dirty boxer shorts or underpants in public and keep pulling the trouser up when as observed above, this can be held firmly on the waist using a belt. How can Otto Pfister’s stature influence dressing in society to this extent. The situation is common on our principal streets and gradually emerging at our workplaces. I have had the cause to caution National Service Persons and other young workers against the practice.

Personally, I detest sagging dressing and I know many other adults do. Families and religious bodies as well as reputable personalities should begin to correct it because I see it as social deviance of a sort. School authorities should also make it a practice and correct the misconduct. The youth should equally be educated on the need for them to refrain from the practice because it is not a decent way of dressing as it deviates from our culture. I think that with this article, I have began the needed public education against sagging dressing in Ghana. Join the public education by expressing your views on the article online and may our nation be Great and Strong.