Ethiopia is eight years behind the world, but they are doing just fine — A piece about my trip to Ethiopia 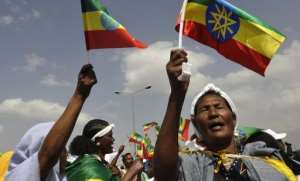 The very day (April 28, 2019) I knew I would be travelling to Ethiopia for the World Press Freedom Day celebrations, I started reading and watching other people’s experiences. A couple of them had mentioned the weather but I thought what they meant was ‘cold’ would be like that of Aburi, or at best Akropong, maybe Kwahu (I saw how you made your face). I could endure. But I regretted the moment I stepped foot out of the plane when mu phone was generous, or probably being mischievous to tell me it was 15 degrees.

I will tell you all about their beautiful weather someday. Today’s is just to tell you about their calendar. Calendar? Why should anybody be bothered about the Ethiopian calendar, Eugene? But give me a break. I’m sure you’ll be a little surprised in here.

A view of a part of Addis Ababa

Imagine my face (if you know me) when I received an invitation on my second day in Addis Ababa to attend an award dinner for the UNESCO/Guillermo Cano Press Freedom Prize. My face did not change because I was attending a dinner — how much rice can a boy eat — the year on the invitation was 2011. Yes, the date read ‘May 2, 2011’ in Amharic, the official language of Ethiopia. Shouldn’t this even have happened some eight years ago? Why would organizers make such an ‘ugly’ mistake? I kept asking questions until a hotel staff confirmed.

Ethiopia was really in 2011. They only write 2019 when they are dealing in English or some other foreign language.

On my first day, the first Ghanaian I met in Addis had mentioned it in passing during our conversation but I took it for one of the jokes a Ghanaian would make of them because of their rickety taxis.

However, Ethiopia uses the Coptic Calendar, which puts it years seven or eight years behind the rest of the world.

According to Face2Face Africa, the difference in the numbering of the years is believed to be because the Ethiopian Orthodox Church disagrees with the Roman Catholic Church about when Christ was born.

Debre Libanos is one of the ancient monasteries in Ethiopia. People travel to the place to pray and seek healing.

Therefore, in contrariety to the Gregorian calendar — which factors in the calculation of the year in which Jesus was born, the Ethiopian Church starts its calculation from the conception of Jesus Christ They additionally believe that Jesus Christ was born in 7 BC, 5,500 years after God’s promise to Adam and Eve.

Ethiopian calendar has 13 months. Twelve of the months have 30 days. The last month, called Pagume, has five days, and six days in a leap year. We had already celebrated Easter in Ghana before I travelled but I went to celebrate a second Easter in Ethiopia. How amazing!

According Ethiopians, a year does not have just 365 days. It has additional six hours, two minutes and 24 seconds.

But even with this change in calendar, you will never struggle as a first-time visitor. Hotels will interact with you based on your calendar. You won’t have problems with currency exchange. The cities are clean and everyone seems to be obeying simple rules and regulations. See, the world is eight years ahead of them but they are doing just okay.

Don’t take this as a motivational piece and assume I am telling you that you could be just fine with your own calendar even if everyone is ahead of you. No. I won’ tell you that. Just wait for my other experiences about Ethiopian food, the many weddings I attended and their beautiful hotels.

This story has already appeared on Medium.