Let's Deal With Vote Buying In Our Elections 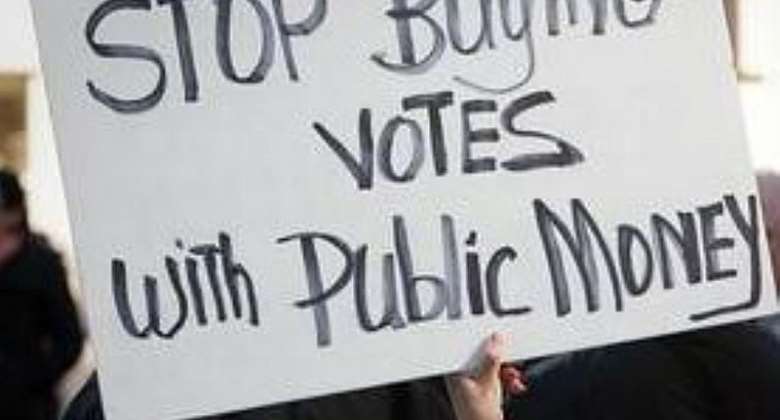 Many people were delighted at the peaceful primary polls organized by NDC throughout the country. The peaceful polls in most of the polling stations are the first of two such primary polls to be organized by the NDC. The feat chalked by the party is likely to be emulated by the other political parties that are yet to organize their primaries. In spite of the happy turn of events a few polling stations recorded skirmishes leading fisticuffs and the destruction of ballot papers in a polling station, that is considered to be uncalled-for. It's believed that the party has taken note of the happenings and would put right what went wrong. A few of the candidates who lost the polls accused the winners of vote bying.. One such respectable person is Honorable Ras Mubarak the incumbent MP for Kumbungu who lost the primary poll to a lecturer. Ras Mubarak is so bitter with the result that he run to lodge a complaint of what he considered to be vote bying with the BNI. He expects them to investigate the result of the poll in Kumbungu. To the NDC and members of the public he has lodged his complaint alright but it's up to the BNI to go into the merit and demerit of the case . Even before the matter is determined a whole lot of people are sad that vote buying which has been with us is refusing to go away and

may be rearing it's ugly head again during electons in Ghana. What adds to the suspicion of vote bying during the polls is when one of the candidates Lawyer xervier Sosu revealed that he spent as much as Ghc300,000 on his way to win the polls to become the NDC Candidate for Madina. According to him he did not spend the cash on the spot but over a long period on transport and other essential items for the members of the party. Even then the ghc300,000 is considered very high. Having spent this much during the primary poll many people Wonder how much more the candidate and others like him are going to spend from now till December 2020 during the presidential and parliament elections. When he wins it's likely he'll be paid as MP with possible openings to recoup his lost cash through fair or fowl means. However when he looses he'll be going into a serious debt. With regard to the lamentations the famous John Dumelo the least said about it the better. He is head saying he is broke after fighting to become the NDC candidate for Ayawaso West. He must be told that this is just the beginning. He has a more difficult struggle to beat other candidates in 2020.He must lace his boots to march on. Since 1992 we have been going through elections. We have experienced improvements in elections in Ghana leading to voters following the polling rules. It is my belief that the NDC and the other political parties would study the situation to improve on voting in Ghana

The NDC and the other political parties are required to study the situation regarding expenditure by candidates. With this, they'll devise a means to levy party members to finance their campaigns. This would save the members and their candidates from spending huge cash themselves that lead to borrowings and vote buying

Meanwhile, many people are of the view that the statement made by chairman Wontumi of NPP in Ashanti, that he has a hand in the primaries election by the NDC is not right. If what he said is true it's a bad example of interference of an opposing political party in the affairs of other parties that must be condemned.

The channel we used was the same channel Joy FM used to get ...
13 minutes ago