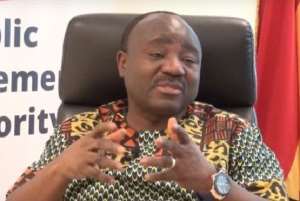 “I have served the public for 36 years. I was able to save Ghana $80 million in one single contract. I have been saving the country millions of cedis in procurement processes. It is very painful for my image to be tarnished this way,” the suspended Chief Executive Officer (CEO) of the Public Procurement Authority (PPA), Mr Agyenim Boateng Adjei, said in a quavering voice.

The beleaguered PPA boss was interacting with the Daily Graphic in the presence of his lawyer, Mr Augustines Obour, while waiting for the bail bond for the CEO of Talent Discoveries Limited (TDL), Mr Francis Arhin, to be executed at the Office of the Special Prosecutor (OSP).

Mr Adjei has been accused of complicity in the award of contracts through his private company, TDL.

He has been granted a self-recognisance bail.
He told the Daily Graphic that he had resigned as a director of the company, had given full disclosure to the board of the PPA and at no point did his company have any dealings with B-Molie Enterprise Limited, another company cited in an investigative piece by the freelance journalist, Manasseh Azure Awuni.

“The public is simply speaking words of untruth. I regret the way I’m being crucified for nothing,” he told journalists.Mr Adjei reported himself to the OSP around 10 a.m. yesterday and left the premises some few minutes to 5 p.m.

Reporters had pitched camp on a lawn in front of the OSP, while investigators interrogated Mr Adjei in the office.

When Mr Obour escorted his client out of the OSP’s office, reporters swarmed around him (the lawyer) and subjected him to a barrage of questions, while Mr Adjei looked on from a distance.

Below is a video of Mr Augustines Obour speaking to journalists after the meeting with investigators at the Office of the Special Prosecutor.

According to him, it would take no time for the public to realise that his client had done nothing untoward.

Hypothetically, he asked why a person should be held responsible for the misdeeds or otherwise of his clerk, in clear reference to Mr Azure’s video showing a member of staff of TDL purportedly issuing receipts for the alleged sale of contracts.

The person concerned, who is said to be an administrative manager of TDL, was expected to be interrogated tomorrow, according to sources close to the case.

Background
The Auditor-General has also been investigating Mr Adjei’s activities over the award of contracts.

According to sources close to the case, the Auditor-General had, for a couple of weeks, gathered documents from the Registrar-General’s Department and abroad as part of investigations.

Also expected to report themselves to the OSP are the directors and the shareholders of TDL.

The directors of B-Molie Enterprise Limited were also interrogated yesterday.

They are all assisting in investigations into procurement malpractices and they are to produce information and documents, pursuant to sections 29 and 73 of the Office of the Special Prosecutor Act, 2017 (Act 959) and Regulation 10 of L.I. 2374.

The OSP is conducting preliminary investigations into suspected commission of corruption and corruption-related offences by the companies.

A statement signed and issued by the Director of Communications at the Presidency, Mr Eugene Arhin, said the President subsequently referred the allegations involving conflict of interest to the Commission on Human Rights and Administrative Justice (CHRAJ) and those relating to potential acts of corruption to the OSP for their prompt action.

Investigations
Mr Awuni’s work depicted how Mr Adjei, who was appointed CEO of the PPA in March 2017, allegedly formed a company in June 2017 to facilitate the sale of government contracts at a fee.

The documentary alleged that interested persons were to pay GH¢5,000 as registration fee before procuring the contracts.

The fee was waived for individuals capable of paying for the contract documents upfront.

No one is above the law except the President - Oliver Barker...
8 minutes ago