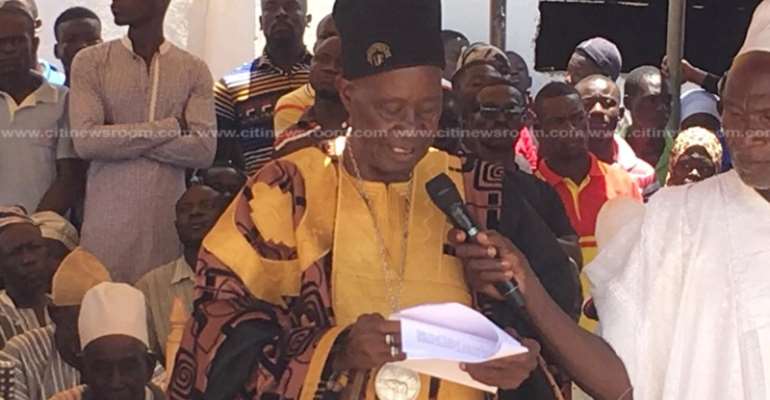 Chiefs in the Wa West District of the Upper West Region have called on President Akufo-Addo to release funds for the completion of key government projects in the area.

Naa Sohemwininye Goreh Danaa II, paramount chief of the Dorimon traditional area made the call on behalf of his colleague chiefs at a durbar of the chiefs and people of the Wa West district to welcome the president at Wichaw.

The chief cited a community day school which was started by the former administration, a fence wall at the Lasia Tuolu Senior High School, the Wa-Dorimon-Wichaw road and the expansion of small-town water projects to some rural communities as major projects that have been abandoned by contractors due to non-payment for work done by the government.

Naa Sohemwininye said the delay in completion of the projects is impacting negatively on development in the district.

“We were happy when the GETFund Secretariat awarded contracts for the construction of a fence wall, two storey library, ICT and administration block projects at the Lassie Tuolu SHS in 2015. As we peak, these projects are yet to be completed and put to use by the school. A proposed Day Senior High School commonly called E-block at Dorimon which was started in 2014 is still incomplete. We are making special appeal for the completion of the projects”.

The chief, however, commended the government for initiating policies that have transformed the living conditions of people in the Wa West district.

He stated that “under your leadership, several development initiatives have been rolled out Nationwide. These initiatives have made life bearable for all Ghanaians of which the people of Wa West district are no exception. The free Senior High School programme is allowing us to use money that would have been used to pay fees to take care of other pressing needs.”

Other initiatives such as the One Village One Dam, the Planting Food and Jobs, the subsidized fertilizer programme, the Rearing for Food and Jobs according to the chiefs have transformed rural farming in the district.

Responding to the chiefs, the president explained that most projects, including the community day senior high schools that were initiated by the Mahama led government, have been stalled because they have no sources of funding.

“Most of these community day schools that were started by the previous administration have no funding that is why they are where they are”.

President Nana Akufo-Addo who is on a two-day working visit to the Upper West region assured the chiefs that government is in a process of securing funding to complete all abandoned projects in the country.

“I am happy to announce to you the Dorimon Naa that we are in a process to get funding for the community day schools and very soon, work will start on them.”

The President called on the chiefs and people of the Wa West district to support the government in the fight against fertilizer smuggling in the region.