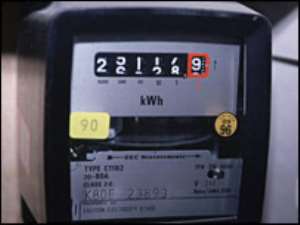 A campaign for energy efficiency was run during the Kuffours’ administration with ads on television and radio telling people how not to waste energy and patronize the less consuming led bulb. Millions of cedis were invested into this campaign yet here we are again running the same campaign with funds that could be used to innovate in power generation.

A major percentage of the energy consumed is at the residency with inefficient use is worsening the power shortage and increasing the electricity demand. A household with tenants sharing a common electric meter will have to split the bills at the end of every month using the point system. In this system, every electric item is graded and assigned a point(s) based on the consumption rate or watt ratings of the item. 3 points for fridge, 2 for TV and 1 for lightbulb is a very familiar system to the Ghanaian tenant. Individual bill is calculated from the sum of her points multiplied by the cost of each point. And the cost of the point is determined by dividing the monthly PDS bill ­­­by the total point of all tenants.

The problem with this system is that, once an item is listed and graded it doesn’t matter how much you use it, you will still pay according to the point assigned to it. This has contributed to a character of inefficient use of energy. Sister Adwoa will switch on the television and mute it to listen to the radio and she justifies her action with a very popular comment, “am still paying even if I don’t use them”. We see tenants who will travel for the weekend but will leave the radio and light on all in the name of balancing their energy consumption. You ask them why they do this and you get the same comment as you did from Sister Adwoa; “am still paying even if I don’t use them”.

Conflicts occur in some households as a tenant may feel he is being held accountable for the inefficiency of others and they opt for an individual meter, a good way for them to be accountable only for what they use and can manage their usage. Clearly individual meter is the solution to people being efficient and account for only what they use as we have seen in the commercial sector. People don’t like to lose money and are very efficient when given the chance.

Unfortunately not every tenant is allowed the privilege of a personal meter and they still have to account for their co-tenants usage. In this time of power crisis and less money being invested by the government to solve the problem, it will be advisable for the Power Distribution Service (PDS) to collaborate with Rent Control and establish a by-law that will require every individual tenant to have their own electric meter.

A by-law of this will be of great benefit to the citizens not only at the energy sector but also at the employment sector. Mass sales of the meter will generate income for PDS which can be used to improve on the distribution efficiency of electricity. Mass distribution and installation of meter across the country will create jobs for the youth and contribute to reducing unemployment in the country. A stone for two birds.