Mediterranean civil society given six months to show their mettle 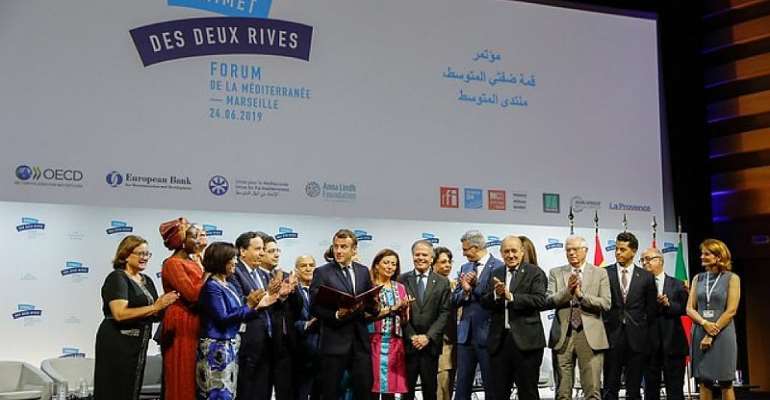 Fourteen development projects, ranging from education and environment to urbanism, are to be implemented in ten western Mediterranean countries. Progress will be reviewed in six months during a heads of state summit in the south Mediterranean.

The projects were suggested by the civil society of the 5+5 Dialogue region and are among the 65 approved by Foreign Affairs ministers during a summit in Marseille on June 24.

“It is a project-oriented diplomacy, one that involves the civil society,” said French President Emmanuel Macron. He initiated this new format of inviting representatives of the population to the same table with Foreign Affairs ministers to reach decisions together.

“What we want to do in order to establish this new Mediterranean framework is to build on concrete projects with results for the population. We have two pillars to do so: youth and women,” he told RFI.

Macron said he was quite impressed by the “energy” of the young representatives from the civil society delegations. Namely, from “Mauritania, Italy and Libya.”

“Not the usual suspects,” said Pierre Duquesne, the French interministerial delegate to the Mediterranean. “They are not the same ones who usually go to international forums.”

They were 100 civil society representatives from the 5+5 Dialogue working on projects that are meant to benefit both their country and the region.

The 5+5 Dialogue regroups 10 countries. Five from the southern shore of the Mediterranean (Mauritania, Morocco, Algeria, Tunisia and Libya) and five from the northern shore (Portugal, Spain, France, Italy and Malta).

“It was not an easy task to manage the groups,” adds Duquesne. “On the other side, it was also complicated to have a mix of states, the 5+5, plus Germany, plus international organisations from the EU to the OECD, including the Union for the Mediterranean and the Anna Lindh Foundation.

“It was very complicated as all those people are not used to working together. We wanted a real discussion among these three sets of actors: civil society, governments, developing partners.

“That was a challenge because it is absolutely new. But there is a strong desire to work together which has been demonstrated again at the summit in Marseille.”

The whole process leading to the Marseille meeting took less than a year. France was keen to avoid the errors of 2008 when the Union for the Mediterranean was set up. That's why Paris invited Germany to join this initiative right at the start. According to a source in the French foreign ministry, President Macron even discussed this initiative with German Chancellor Angela Merkel.

The money
Out of the 65 projects selected by the 5+5 governments, 14 are to be rapidly implemented. They will be regularly monitored and cover the five main themes of the Marseille commitments signed by the ministers: knowledge and mobility; sustainable Mediterranean; multicultural Mediterranean; innovative, digital and enterprising Mediterranean; cities and territories.

Macron said he believes in a “structured dialogue” among the Mediterranean cities. One of the selected projects attempts to do that with “sustainable coastal city partnerships in the Mediterranean based on the circular economy for food”.

The project is proposed by Italy. Along with France, Malta, Tunisia and Algeria, the five countries will work together to build this new project. In 6 months, they hope to show how it is evolving in either the port cities of Marseille (France) or Bizerta (Tunisia).

“We want to put money on the first 14 projects with the EIB, the EBRD and the European Union in order to build up and have a big acceleration with results,” President Macron told RFI.

The funding is a complex one to put in place because only governments can borrow money, unlike the civil society groups.

“We want to push and increase progressively the different governments to work with cities, with the young people, with the entrepreneurs because it is not 100 percent automatic in all of these countries. So, I think this new method, by itself, is very productive as well,” Macron added.

Reactions
Giulia Maci is an urban planner and the head of the Italian civil society delegation. She had a private discussion with the French president during the lunch organised after the Marseille summit and said that Emmanuel Macron is the only one, among the European leaders, with a big vision for development.

“He clearly has one for the Mediterranean region, a pragmatic, result-oriented one where we've been given 6 months to take stock of the progress achieved,” she said.

Maci had an overall positive experience of the Summit of the Two Shores in spite of it being too political for her taste, “too formal for a summit that was supposed to be an innovative one.”

Noureddine Benbraham, from the Algerian delegation, and chairman of the Association for Democratic and Human Rights said it was an unusual summit.

“Usually initiatives for our region do not cater for the needs of the population but are more concerned with security issues such as terrorism or illegal migration. This approach is more realistic and while it takes into consideration the specificity of each country, it also addresses regional concerns,” he said.

Benbraham doubts that the Marseille commitments will be able to resolve all of the western Mediterranean problems but “they give us hope as they aim to address the needs of the citizens.”

The Libyan factor
The Summit of the Two Shores, held in Marseille, was originally meant to be a gathering of the 10 Western Mediterranean heads of state. Macron admitted that the political crisis in Algeria and Libya made that difficult to achieve.

Libya's Government of National Accord is a fragile one; it is fighting General Khalifa for the control of the country. In April, Haftar launched an offensive on Tripoli and his troops are now positioned in several areas outside the capital.

Libyan Foreign Affairs minister, Mohamed Siyala, said that his country does not intend to wait until a peace resolution is reached to start working on development initiatives. It wants all set and to be ready when the conflict is over.

“Despite what is happening in our country we are capable of working together,” said 27-year-old doctor Farrag El Hassi and founder of The 40 Foundation in Benghazi. “Look here in Marseille, we are a delegation of ten young Libyans from different parts of the country.”

“We met thanks to the Two Shores Summit. Now, we have decided to set up a strong network of 1,000 Libyans with me in Benghazi, Mohamed Alserkeek in Tripoli and Majdy Jebeiel in Sabha.

“We intend to start with our own projects as well as that of the summit, whether we get the funding or not.

“If we keep thinking about our problems in Libya, we will never move forward.”

Keeping the momentum
For Carmelo Abela, the Foreign Affairs minister of Malta, the main challenge now is moving forward with the implementation stage.

“This is a most critical stage because if we do not succeed, we will not look credible and I think that a substantial number of people involved in this will lose faith,” he declared.

Tunisian-born and 2015 Noble Peace Laureate, Ouided Bouchamaoui, is the head of the civil society steering committee. She described the whole process as a “unique experience” which helps “reduce the gap between political leaders and the population.”

Macron's complex triangular concept for development appears to have rallied support from all parties within the 5+5. For the youth from the southern shore, it doesn't matter so much who is in power as long as they are given adequate resources to help their ideas and projects thrive.

Doctors threaten strike from October 1 over arrears
39 minutes ago