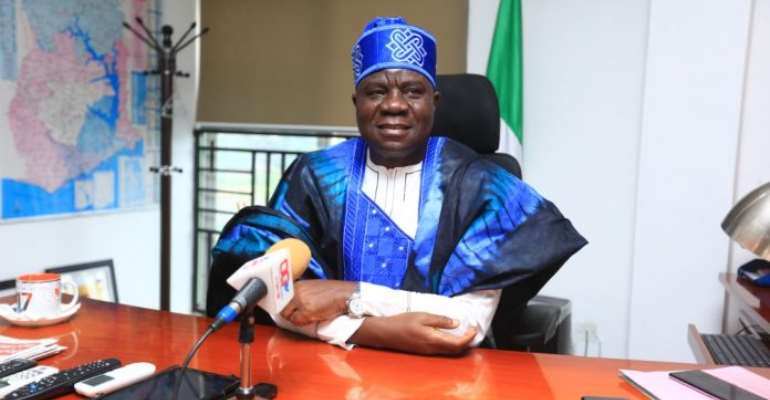 Fellow Ghanaians, as a political science student, I cherish history so much. Not to be enslaved by history as majority of ethnic groups in the northern regions have allowed it to useless them, but I love history in order to be guided by the past.

In 1996, Mike Wallace, a USA based journalist, interviewing Minister Louis Farkhan (a Nigerian African-American and leader of the Nation of Islam in the USA) among other things, accused Nigeria of being the most corrupt nation on earth.

Those who watched that interview could tell how that audacious allegation by Mike Wallace turned out to be a dirty slap on the face of his interviewee Minister Louis Farkhan and the people of Nigeria.

Minister Louis Farkhan in that interview nearly perished out of rage. He instantly became so furious to the extent that he pointed out to Mike Wallace the amount of blood America has in its hands.

Many Nigerians reacted to that statement made by the journalist and the matter later died down naturally because Nigerians could risk exchanging words with the most exceptional power on earth.

Meanwhile, around that period, president Sani Abacha of Nigeria, was named and ranked second only to Mobutu Sese Seko Kuku Ngbendu Wa Za Banga of Dr. Congo, who was claimed to have stolen over five billion US Dollars.

Today, these leaders remain the leading worse evils befallen their people and countries after Satan.

And up til date, the loot of Sani Abacha is still being repatriated back to Nigerians from many European countries.

Therefore, the association of criminality with Nigeria is never started by Ghanaians. And this is not the first time either that Nigerians cry foul over the demonization and generalization of their entire nation with the toga of criminality.

The point is, if you enthrone your child as an Asantehene, you must carry him by yourself in a palanquin!

Nigeria has dramatized to the world in through their powerful and lucrative Nollywood the amount of criminality in that most populous black country in Africa.

From kidnapping, picking pocketing, ritual practices, to human trafficking, Nollywood has done a great job, exposing such crimes to the world.

This is the Genesis of the demonization of Nigeria and Nigerians.

Nollywood never misses the opportunity to inform a suspecting globe what to expect from Nigeria.

It is not Ghanaian media.
We beg our brothers and sisters of Nigeria to be civil with us.

Of course, it is just in a movie but nobody in Nigeria, despite its overflowing intellectuals from all walk of life, ever thinks of the dire consequences such as what they are seeing and experiencing today could bring to them.

The perception of the world about them has centered on fraud and crime in general.

It is a niche Nigeria has proudly carved for itself.

It's not Ghanaians who are demonizing Nigeria, Ghanaians are only helping Nigeria to amplify who a Nigerian is and what he or she is capable of doing, according to Nollywood.

However, it is only in mathematics that negative-negative makes positive. In a human society two wrongs never makes a right.

And if care is not taking, Ghanaians are likely to squander our democratic goodwill we have been enjoying over the years on the altar of vainglorious national jihad and lack of compassion and empathy.

It is very painful to be labeled and stereotyped about what you are not.

Indeed, it is a fact that when the figures "419" that connote fraud and thievery are mentioned, Nigeria comes to mind.

Corruption, ritual money making, Sakawa, and all fraudulent issues have always been associated with Nigeria that have been dramatized over the years in Nollywood.

Nigeria, according to Nollywood, is the safest Haven for every con artist: ranging from ATM politicians to ordinary thieves on the streets of Abuja, kidnappers, and human traffickers.

Nigeria, whether this porous image has been deliberately couched by a divine decreed or wicked blackmail by Nigerians themselves or their detractors elsewhere, has almost become synonymous with fraud.

This has eclipsed the good image of the Africa's giant. Nobody talks about their intellectuals anymore.

Sometime ago, people used to exchange pleasantries by wishing each other abundance of health like corruption in Nigeria; Happiness rise like fuel price in Nigeria, and so on.

However, it is unacceptably wrong to refer to all Nigerians as fraudulent citizens and criminals.

Nigeria is almost seven times the size of Ghana in terms of land size with 36 states in a Federation, and over two hundred million citizens.

Every sixth person, it is claimed, in Africa, is supposed to a Nigerian.

If we all agree that there's a black sheep in every family as we always say in our local parlance, we must as well accept the fact that, where two or more "families" come together to work together, the number of their black sheep have to increase!

Ghana being a fraternal brother, a friend, and neighbor to Nigeria, will necessarily have to bump into some of these bad guys as their neighbor's black sheep!

No excuse.
Nigeria as the most populous, if not the most powerful black nation in Africa with plenty intellectuals, must by necessity, never be in short supply of bad guys (plenty black sheep)

It is therefore a kind of theory of demand in economics: the larger the number of buyers the lesser the price and vice versa.

If Ghana were as huge as Nigeria, with its own Nollywood perhaps, our criminals would have as well been chased around the globe.

So the numerous the Nigerian population, like America, the plenty its intellectuals and criminals.

Some Ghanaians who are demonizing Nigeria and tarring all Nigerians with the same brush of notoriety must appreciate this simple logic and desist from that as a matter of compassion and empathy.

Ghanaians are mainly known and respected throughout the world for our peaceful democracy, hospitality, and hard work.

It must not be just lips service.
Few years ago the American Emigration Service noticed demand for the Ghanaian passport was on the rise because of other Africans in Europe and America were hankering after it.

The simple reason was that with a Ghanaian passport in either America or Europe, one is guaranteed quick job in the job market and wouldn't hunt for long.

Ghanaian emigrants were touted for their hardworking habit and their sense of giving good work for better pay.

It is not for nothing that we are the stars of the people of the black race on earth.

However, this goodwill would soon be wasted and broken into smithereens if some Ghanaians refuse to yield to the plead of our fraternal brothers and sisters of Nigeria, not to demonize their entire nation because of expected few black sheep in their midst.

It's good to fight for our country but we must respect the dignity and patriotism of other people.