Iran - US Tensions: And the Winner is…? 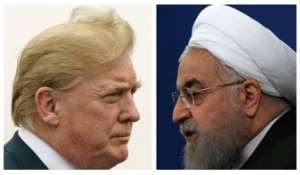 There have been rising tensions in the Middle East between the Islamic Republic of Iran and the United States of America - tensions that have been escalated by the deployment of aircraft carriers, bombers and some additional troops to the Middle East by the US.

These tensions are a consequence of the withdrawal by the US from the Iran Nuclear Deal and the subsequent re-imposition of economic sanctions on Iran; sanctions that experts believe are hurting the Iranian economy very badly.

In the context of Iranian politics, President Hassan Rouhani is one of the few moderate politicians who believes in reforms by the Islamic Republic and establishing closer ties with the West.

Indeed, his reformation and pro-west agenda have been used by the hardliners to make things difficult for him in Iran, portraying him as a weak leader who can surrender Iranian sovereignty to the west.

After the signing of the Nuclear Deal in 2015, conservative hardliners in Iran, including security establishments such as Basij Militia and the leaders of the Revolutionary Guard Corps were very critical of the President and his foreign Minister Javad Zarif, expressing strong opposition to the deal and describing it as “a deal with the devil.”

This policy of maximum pressure by the US is, therefore, playing into the hands of the conservatives, who will waste no time to capitalize on the hardships the people are facing due to US sanctions and mobilize the masses against the president they describe as weak.

Of course, nothing can be closer to excitement for the US and its allies in the Middle East than a regime change in Iran; though President Trump has publicly stated it is not their goal. However, the alternative to the current Iranian regime should be a nightmare for everyone.

The real beneficiary of such a change will not be the US but the hardliners who for some years now have been critical of President Rouhani’s pro-West and reformation agenda as they did with a former reformist President Mohammad Khatami. When they finally get power with the help of US sanctions, they will seek nothing but a confrontation with the US and Israel.

It is significant to note that, a war between Iran and the US will be catastrophic for the two countries and their strategic interests in the Middle East, though in the context of the balance of military power, Iran may take decades to recover.

As argued by many, it will also deal a devastating blow to the fight against ISIL in Iraq, as the Iranian proxies who are helping the Iraqi military fight ISIL is most likely to abandon that fight and rather focus on supporting Iran.

It is, therefore, clear that the general direction of things in the Middle East does not look good. The United States may have to take a second look at its current policy towards Iran; both parties must realize that there cannot be a winner when things finally get out of hand.

Conscious efforts must be made to put egos aside and use diplomatic means of resolving the impasse, if possible, there must be a third party mediation because the Middle East may not survive an Iranian–US war now.

Author: Ibrahim Suhuyini is an International Affairs blogger at ibrahimsuhuyini.blogspot.com