Khartoum Erupts With Joy As Bashir Successor Steps Down 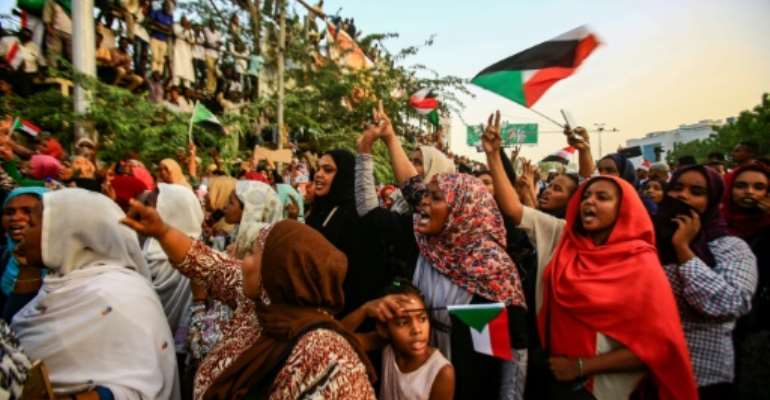 Car horns sounded on the streets as jubilant crowds streamed out of their homes to cheer the exit of Ibn Ouf, considered as a regime insider. By ASHRAF SHAZLY (AFP)

Crowds of Sudanese waving flags and chanting "we toppled two presidents in two days" celebrated in the capital late Friday after the country's military council chief stepped down a day after he was sworn in.

"We have done it, we have done it," shouted young men and women as they drove across Khartoum after General Awad Ibn Ouf announced his resignation on state television.

On Thursday, he was sworn in as the chief of a ruling military council that replaced long-time president Omar al-Bashir, who was ousted by the army following months of deadly protests.

Before quitting, Ibn Ouf appointed Lieutenant General Abdel Fattah al-Burhan as his successor, setting off a wave of jubilation across the city.

Chants like 'It fell again, it fell again' reverberated across the capital's squares and neighbourhoods, onlookers said. By ASHRAF SHAZLY (AFP)

Car horns sounded on the streets as jubilant crowds streamed out of their homes to cheer the departure of Ibn Ouf, considered a regime insider and close aide of Bashir.

Chants like "It fell again, it fell again" reverberated across the capital's squares and neighbourhoods, onlookers said.

"This was our second uprising, first against Bashir and then against Ibn Ouf," said Mohamed, a protester, whistling and clapping in an upscale Khartoum neighbourhood.

Dozens of members of a paramilitary group stood at the sidelines, many atop pick-up vehicles loaded with machine-guns, as cheering crowds drove past, witnesses said.

Protest organisers however warned Burhan that if he failed to transfer powers to a civilian transitional government he would face their fury too. By ASHRAF SHAZLY (AFP)

Protest organisers however warned Burhan that if he failed to transfer powers to a civilian transitional government he would face their fury too.

They called on Burhan to reverse decisions announced by Ibn Ouf such as cancelling the suspension of the constitution and also implored him to end the state of emergency and night-time curfew.

Thousands of protesters have massed outside the army headquarters in the capital since April 6.

Dressed in white traditional clothes, men and women headed to the military complex on Friday to join thousands of others camped there. By MOHAMMED HEMMEAIDA (AFP)

Dressed in white traditional clothes, men and women headed to the military complex to join thousands of others camped there.

"We did it once, we can do it again," said a protester, who had been at the site of the demonstration since Tuesday night.

Since the appointment of Ibn Ouf as military council chief, the protesters had turned their anger against him.

Thousands were again flocking to the sit-in site attempting to stay for a seventh night in a row, defying an army night-time curfew. By Ebrahim Hamid (AFP)

"This entire group is from Bashir's regime. We want a civilian leader."

Several soldiers were however seen chatting and mingling with protesters at the complex on Friday, witnesses said.

As the evening approached, buses full of protesters headed to the protest site with plans to defy the curfew again, a witness told AFP.

A mass of people flooded two bridges that connect the capital with suburbs.

At the protest site itself thousands offered Friday prayers earlier in the day.

Witnesses said the entire area reverberated with the sound of singing. By ASHRAF SHAZLY (AFP)

An imam dressed in a white robe with a Sudanese flag draped over his shoulder led the weekly prayer.

"This is the first time that I'm coming here in response to calls that today's prayers will be performed here," said Hussein Mohamed, an elderly man who came to the site from Omdurman, Khartoum's twin city across the Nile.

Groups of Coptic Christians served food and drinks to worshippers ahead of their prayers.

Many offered mats to protesters who had been camping at the site since last night.

Witnesses said the entire area reverberated with the sound of singing.

Thousands of protesters have massed outside the army headquarters in the capital since April 6. By ASHRAF SHAZLY (AFP)

Protesters were chanting in circles, with one leading the song and others dancing in circles around him repeating it.

Groups like this are everywhere, said one demonstrator as behind him musicians played traditional Sudanese and African tunes.

Later in the night when Ibn Ouf quit, demonstrators at the complex burst into joy, many kissing photographs of those killed in protests, an onlooker said.

Demonstrators chanted "What happened? It fell again," he said.

Protest organisers have called on the demonstrators to continue with the sit-in until their demands are met.