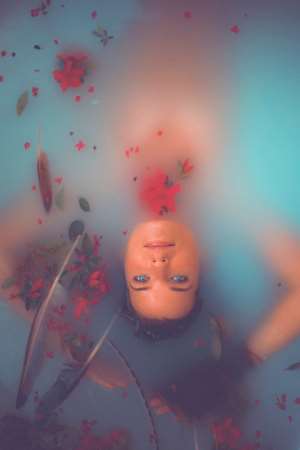 I tell my story not to justify myself in the eyes of our blind culture but to prove to you that it's wrong to punish a person twice for the same crime. I hope my story helps you to understand and appreciate the toll I've been in these couple of years. I'm not responsible for what I've done and continue to do. I won't blame my parents though they both have children out of wedlock and occasionally cheat on each other, and I won't blame my boyfriend though he is the one who supplies the ideas which influence me.

I have loved just one man all my life and he has always been my poison and cure. In the beginning it wasn't all Rosy but it was just life for we had our ups and downs. I had my male friends whom I loved being with more than my boyfriend and till date I see nothing wrong with it though he says all he can to shame me for that.

Two years into our relationship I went to school in another town and he was displeased because according to him "I was just going away so I can spend more time with men." I got mad but decided to prove him wrong so just my first semester I made a lot of male friends and aside a couple of shared kisses with a few I didn't do anything even the prude will call cheating.

He sometimes traveled to see me on weekends but he never gave advance warnings so most times I had already arranged to do things with my male friends and when I wasn't available he'll be mad. He always asked me to stick to my promises yet he wanted me to break it to my friends who cherish me. It was one such visit that my witchcraft infested roommate told him I was in the room with a man. The jackass I call a boyfriend came inside without knocking and when he entered the bathroom there I was standing with water dripping from my body while the man was on his knees before me. Till date I swear we were not having sex and I had no intention of it, he was just helping me shave.

My boyfriend got so furious and asked why I'm having sex on campus with another man when others know we're dating. The pig dared asked me why I'm having sex when he's the same person who had not insisted we have sex before I went to school. I'm not blaming him but it's his responsibility to make me submit to his wishes. I remember clearly that when I was home for a long break he had asked for sex and I told him I'm practicing celibacy and he congratulated me. What sort of man says congratulations when his woman says "I'm abstaining from sex until marriage". I even gave him opportunities to take advantage of me and he pretended on being a gentleman.

Anyway who visits his girlfriend the first week she goes to school? Like I've said I didn't plan on having sex with the guy but I was contemplating having sex. He accusing me of what I hadn't done helped me decide on what to do the moment he angrily left Cape Coast. I called the man I had decided to sex and we had a good time. I had already been accused and was being punished for a crime I hadn't done so why not do it. Who could blame me for having sex?

To make a long story short, my boyfriend forgave me after a few days and asked me to stay away from my barber, which I admit I can't and won't do for the guy is great at turning me on. What is life without a little excitement?

I haven't told my guy of the other men I've had sex with since I went to the university - I've barely been with 15 though I'm now in my 3rd year - I say barely for some of my friends are in their 20's and even one boasts of entertaining 28 in our second year. I swear I don't enjoy sex but I just have to do it. I don't like being accused or asked if there is another guy. Why would he think there is another man when all I do is not answer his call when I have a male visitor, is it my fault that all my friends are males? He is even lucky that I barely want to have sex with my study mates for then I'll always be doing it as he always accuses me of doing it.

Something has to be said for a culture that blames the individual for her actions. What happened to education and sociatal reformation? Has it not been proven again and again that a man isn't responsible for what he does or to put it another way "the causative principle of all good and bad behavior originates from outside the self"? It is my wish that by this letter many will be educated to know that no single individual is responsible for his actions for all actions are precipitated by other people's actions.

I love to praise and write at inGodded.com