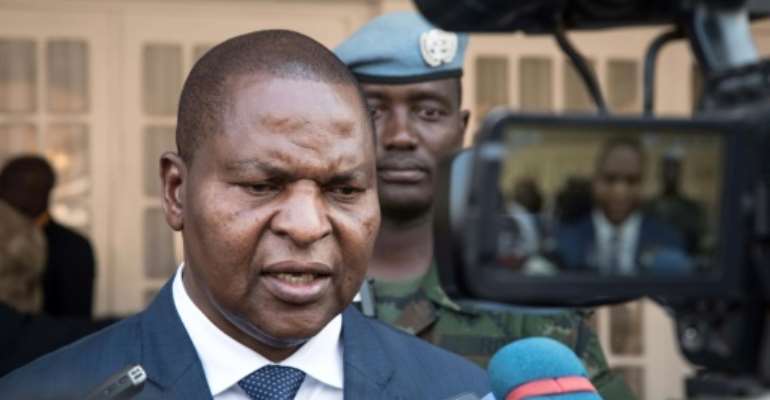 Eleven out of 14 armed groups that signed last month's peace deal in Central African Republic (CAR) have demanded that Prime Minister Firmin Ngrebada step down, according to a statement seen by AFP Tuesday.

"Firmin Ngrebada is no longer credible, he is therefore no longer our discussion partner for pursuing the process and must be replaced as prime minister," they said.

Armed groups in the peace deal are attending a followup meeting in Addis Ababa under the aegis of the African Union.

Their statement, which was dated Monday, called for the formation of a "government of national unity" and for "direct talks" with President Faustin-Archange Touadera.

The peace deal was signed in the CAR capital Bangui on February 6 after it had been concluded in negotiations in Sudan.

The pact -- the eighth since 2012 in the conflict-wracked, impoverished state -- brought together the CAR government and 14 armed groups who control most of the country.

The agreement called for a series of confidence-building measures, such as establishing joint patrols and the creation of a truth and justice commission within 90 days.

Under the peace accord's provisions, Touadera agreed to form an "inclusive" government.

But within weeks, the deal was under strain -- five militia groups either pulled out of the new government or rejected its makeup.

Ministers in sensitive key posts all kept their jobs, while six of the 14 armed groups obtained no post at all.

CAR has been struggling to recover from the bloodletting that erupted when former president Francois Bozize, a Christian, was overthrown in 2013 by mainly Muslim Seleka rebels. 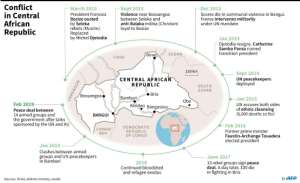 Chronology of conflict in the Central African Republic. By Sabrina BLANCHARD (AFP)

Former colonial ruler France intervened militarily under a UN mandate, pushing the Seleka from power, and a 12,000-strong UN peacekeeping mission, known as MINUSCA, was established to help restore stability.

Despite the elections in 2016 that brought Touadera to power, the country remains convulsed by violence.

The conflict has left thousands dead and forced a quarter of the population of 4.5 million from their homes.

The new statement said the Khartoum agreement was "still valid" but the government that followed it was "stillborn".

Its 11 signatories include two out of the three biggest ex-Seleka groups -- the Unity for Peace in Central Africa (UPC) and the Patriotic Movement for Central Africa (MPC).

The other ex-Seleka major group, the Popular Front for the Rebirth of Central Africa (FPRC), led by Noureddine Adam, did not sign the statement.

Two groups from the so-called anti-balaka movement, which emerged to fight the Seleka, also did not put their names to the communique.

In Addis Ababa, the UA's commissioner for peace and security, Smail Chergui, who is also chief mediator in the follow-up meeting, tweeted on Tuesday that he had met with Ngrebada "to exchange views on opportunities for fast tracking implementation of the #RCA Peace Agreement".