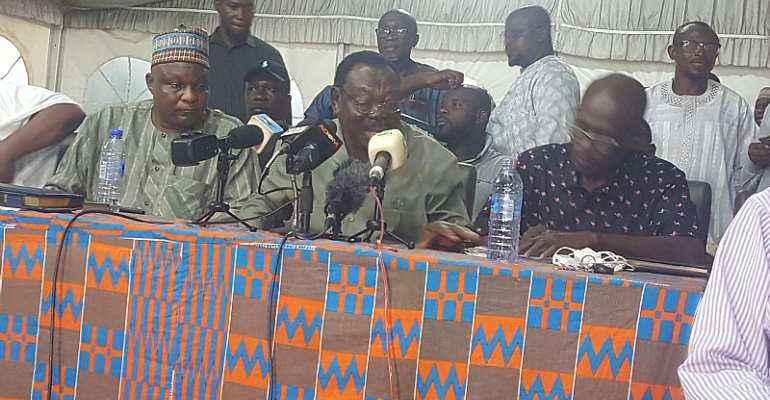 The Pilgrimage Affairs Office of Ghana ( PAOG) in collaboration with the Hajj Agents Association have pegged the 2019 hajj pilgrimage fare at GHC19,500.

Ghana according to the Pilgrimage Affairs Office of Ghana has been allotted Six Thousand slots for this year's pilgrimage to the Holy Land.

At an announcement in Accra, the PAOG Chairman, Sheikh I.C Quaye, urged would-be pilgrims to hasten and pay their fares with their respective hajj agents.

He added that the fare should have been more than the agreed fare but it's due to government's intervention hence arriving on the Ghc 19500, equivalent to USD 3500.

Sheikh I. C Quaye promised that this year's hajj service shall be among the best of the best from the PAOG.

He also warned would be pilgrims to be careful not to deal with roadside agents who would promise them protocol slots. " It's only the government that can guarantee pilgrims protocol slots".

On his part, the chairman for the Hajj Agents Association, Alhaji Issah Umar urged pilgrims to contact their respective hajj agents to start paying their fares.

Alhaji Issah Umar also asked pilgrims to make sure they pay their hajj fares within the stipulated two months and two weeks agreed upon by both the Hajj Board and the Agents Association.

He cautioned that there wouldn’t be any chance again if the deadline elapsed for any pilgrim to pay his money.

Meanwhile, a member of the Hajj Agents Association who spoke on condition of anonymity welcomed the hajj fare but raised concerns over the timing of the announcement and deadline given.

He was of the view that the two months and two weeks issued for pilgrims to settle their fares is not enough and that it would put more burden on the pilgrims.

He, therefore, appealed for a little extension of time from the Pilgrimage Affairs Office of Ghana, beyond the agreed deadline.

The deadline agreed on for all would be pilgrims to pay their fares is April 30 2019.

The Press conference was preceded by a closed-door meeting between the Hajj Board and the Hajj Agents Association of Ghana.