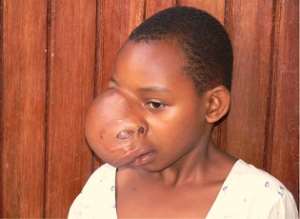 From 1962 to 1966, the same pathologist described such Burkitt's lymphoma in dogs, in a Veterinary Hospital in Pasadena, California. Burkitt's lymphoma is a cancer of the lymph nodes which is caused by retroviruses and a virulent form of the Epstein-Barr Virus.

It is affecting children in Uganda since 1957, as a result of the intervention of the USA forces and occurs with increased frequency in Aids. In 1969, scientists from the New England Regional Primate Research Center, Southborough (NEPRC) reported that they have obtained a virus from a spittle of a Cebus monkey.

They only offered a very general description despite its incredible characteristics and referred to this as the 'Cebus isolate (C.I.). Vaccination with this Cebus isolate virus reduced immunoreactions of Cebus monkey to such an extent that six months later, a further vaccination with a Herpes virus led to death within 20 days.

Hence, there is now the knowledge of an agent which kills by weakening the body's powers of immunity.

In 1969, when the USA Armed Forces applied to the USA Congress for funds to create biological weapons, they justified it as follows: "Within the next 5 to 10 years, it would probably be possible to make a new infective microorganism which could differ in certain important aspects from any known disease-causing organism. Most important of these is that it might be refractory to the immunological and therapeutic processes upon which we depend to maintain our freedom from infectious disease." Eight years later, mass HIV-infections set in.

From August 1967 to December 1968, 120 Gibbon monkeys died in a monkey research center in Thailand, which was run by the armed forces, four of the monkeys had malignant lymphomas. The spleen was previously cut out from these living animals, and they were given transfusions of blood from monkeys infected with malaria.

They were also infected with a human Herpes virus, resulting in all animals suffering from encephalitis. One of the monkeys had immunodeficiency. It did not form any antibodies against the Herpes virus. One (the same?) monkey had been vaccinated with Dengue-I Virus.

The accumulation of lymphomas in monkeys was something completely new and unique. In 1960, it was reported in more than 100,000 cut-up monkey, only one single tumour (no Burkitt's lymphoma) was found.