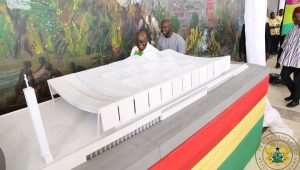 The Supreme Court on Tuesday adjourned the hearing of the case against the construction of the National Cathedral which has largely divided opinions in the country.

The Supreme Court’s decision is to allow lawyers of the plaintiff, the Convention Peoples Party's (CPP), James Kwabena Bomfeh, to amend the original writ.

Although it is not clear which part of the writ issued they want to amend, Deputy Attorney General, Godfred Yeboah Dame, who was in court on Tuesday, did not oppose the application, and further waived the state’s option of responding to the changes to be effected.

The justices of the court granted the request by the lawyers of the applicant, and gave them three days to file the amended writ.

Mr. Bomfeh, also known as Kabila, went before the Supreme Court in March 2017, seeking the Court's intervention against Government's decision to construct a National Cathedral as well as the organisation of Hajj pilgrimages.

He argues that, government based on provisions of the 1992 Constitution, has no business meddling in religious Affairs in a secular state like Ghana. He described government's involvement with the construction of the National Cathedral and the organization of the annual Hajj pilgrims as “state interference.”

The Supreme Court at a previous sitting on October 24 ordered parties in the suit to file a joint memorandum of issues within a week.

The memorandum was to spell out the agreed issues expected to be decided upon by the Court.

At-Issue memorandum is a legal document that is generally filed in a civil case.

It states that all parties to a case have been served and that the parties are “at issue” over one or more points that need to be resolved at trial.

In short, it simply states that the case is ready to go to trial. The party may also include in the memorandum, the estimated time that would be required for trial.

Background The government announced plans to construct a National Cathedral to serve as a national non-denominational Christian worship center for Ghana.

Some nine justices of the Court of Appeal as well as other judicial staff occupying bungalows around the site earmarked for the project have been asked to vacate to make way for the construction of the 5,000-seater capacity facility.

They are to move into temporary residential buildings pending the construction of some 21 new bungalows on the Second Circular Road – Cantonments in Accra.

These will be completed and handed over by January 2020. But some Ghanaians are opposed to the project.

Whereas some believe it is a misplaced priority, others want it to be relocated to other places outside the capital city.

President Akufo-Addo had earlier mounted a spirited defense of his administration's decision to construct a national cathedral in the capital, Accra.

Speaking in London, the president said the construction of such an edifice must be regarded as a significant symbol of the ordinary Ghanaian's life.

“People will ask if it (national cathedral) is a priority. It is a priority among priorities. We'll never find enough money to do everything we want to do. But we have to begin, and that's what we have started,” he added.