Bombshell: John Mahama should use the 'stolen money' to construct a dam - Abronye DC 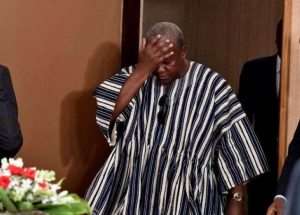 The former President supposedly said, he hasn't seen any dam constructed at the Northern part of Ghana as promised by NPP prior to the 2016 presidential polls.

He said this, at the party's head office in the Northern Region during his campaign tour.

His comment has exploded firebrand man of the NPP, Abronye DC.

"Do we construct dam under John Mahama's bed"? he quizzed.

According to Abronye DC, Mahama should model a dam with the monies he 'stole' during his tenure as Head of State.

"If Mahama wants dam to show at his party office, he should build one with the monies he stole", he alleged.

"The monies he is using for the campaign which he stole should be used to construct dam at the NDC office", he told Top FM in an interview.

Abronye DC continued by discrediting H.E former President John Dramani Mahama as a President since he ordered the party's General Secretary to organise a press conference against EOCO's team of investigation.

"What former president?"
"He ordered Asiedu Nketiah, General Secretary to organise a press conference against EOCO's investigation, should they be called", he stated.

'We will stand united to oppose e-levy' – Haruna Iddrisu but...
28 minutes ago