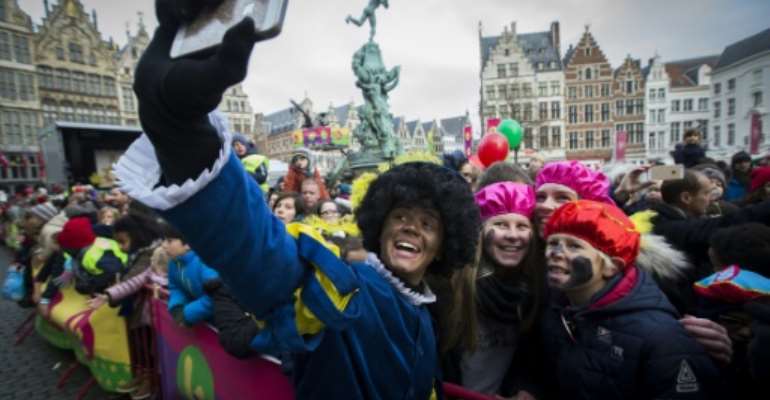 Dutch public broadcaster NTR has decided to change the look of Zwarte Piet (Black Pete) during the traditionnal arrival of Sinterklaas (Saint Nicolas) this year. By KRISTOF VAN ACCOM (ANP/AFP)

The Dutch public broadcaster said Wednesday it had decided to change the appearance of the traditional Christmas-time character Black Pete whose blackface outfit sparks an annual controversy.

NTR said the character of Zwarte Piet -- the helper of Saint Nicholas, or Sinterklaas as he is known in Dutch -- would this year only have soot smudges on his face for his official arrival in November.

"The NTR respects both tradition and change, but it is our public duty as an independent public broadcaster to reflect these changes in society," said the broadcaster, which makes the programme for his arrival.

"Therefore the Black Petes this year will have soot on their hands and faces because they came through the chimney.

They will have different types of hair and will not be wearing golden earrings."

Black Pete's character is usually performed by an adult with a blacked-up face, wearing an afro wig, earrings, gaudy costume and red lips -- a costume that has increasingly come under fire for being a racist stereotype.

Critics say his Afro hair, black skin, red lips and earrings are a reminder of the era when the Netherlands exploited slaves, notably in Surinam.

But many Dutch strongly defend the traditional Black Pete, with the most common explanation being that his face is black because of soot from the chimneys he descends to bring presents to excited children.

The broadcaster added that "we produce this programme for the whole of the Netherlands and therefore we would like involve as many people as possible in these changes."

Its decision appeared to trigger the start of what has become an annual debate in The Netherlands over the issue.

Protests -- on both sides of the debate -- are scheduled this year for the arrival of St Nicholas.

He arrives on 17 November in Zaanstad, north of Amsterdam, ahead of the festival of Sinterklaas on December 5 when the Dutch traditionally give each other presents.