When reality unsettles the empty braggarts... 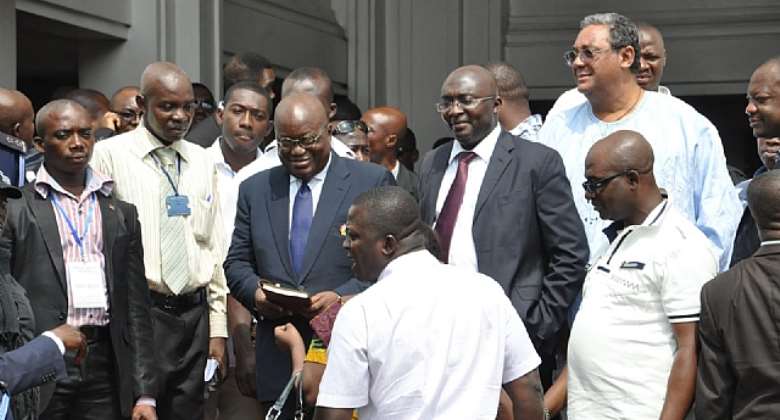 The empty braggarts are in serious trouble already, less than 2 years in power. They can't jump the hurdles and are in a mad rat race to outdo each other in displaying super incompetence. Every sector of national life is falling apart under them and the country teeters toward a political Armageddon.

All of a sudden, they have lost their voices in raising arguments to defend their own acts of commission or omission. All that is issuing forth from them muddies the waters all the more and exposes their inadequacies.

In the heat of the electioneering campaigns, they bragged in many ways:

1. They would halt the depreciation of the Cedi and raise standards. What is their explanation now that the Cedi has tumbled beyond repair or redemption?

2. They would not go a-borrowing as the Mahama government was doing because Ghana was "sitting on money"?

What is the situation now? They are clueless to the point of selling Ghana to China while making ugly noise that they would end Ghana's ties with the IMF by the end of this year. No alternative except the vacuous slogan of "Ghana beyond aid".

3. They would create jobs for the youth. Can they explain why the banks are collapsing and workers all over the place are being laid off?

4. They would stop corruption in Ghana. Can they explain why corruption under them has outstripped what it was in previous eras?

5. They would give each village a dam, each district a factory, each constituency a million Dollars a year for development purposes. Eisssshhhh!!

Shamelessly, they are going about commissioning old projects and claiming them to be a manifestation of their dream (one district, one factory, for instance). No dam has been constructed anywhere. The only attempt led to a dug-out that attracted a teenager to get drowned in it recently.

6. And many more, including introducing the free SHS programme whose implementation is now fraught with head-splitting problems because of lack of acumen.

From the haphazard manner in which the programme is being implemented, there is no doubt in my mind that Team Akufo-Addo is more than confused. What were they thinking when they opened the floodgates for all manner of JSS students to be admitted into the SHS system without considering logistics as a major obstacle to any future phase of the programme?

Now that the reality has hit them hard in the face and unbalanced them, they have gone into overdrive, introducing an unremarkable and more confusing "Double-Track" system that is neither here nor there in terms of trajectory.

And they aren't even sure what to do to solve the attendant problems. Comparing the hazy "Double-Track" system to happenings in church circles (as Bawumia and Co. have done), raises the idiocy to its highest possible limits.

Who attends church to study for exams at the end of the period? Which church looks up to the timetable of the West African examinations Council to determine where its members will go next on the ladder?

Where are "the men" among them that they boasted of to hoodwink the voters? I don't see them. I see only absolute idiots!!

And they are gradually owning up that life (the cost of living) in Ghana under their watch is "hard". An admission of failure, meaning that they are woefully incompetent. Shame unto them!!

And I expect more of their inadequacies to hit Ghanaians as things continue to fall apart.

I have said it many times already that the time will soon come when Ghanaians will line up on the streets/roads to hoot at Akufo-Addo, Bawumia, and those mismanaging affairs. Mark my word!!