On managing Ghana’s Economy: Does Bawumia have any conscience anymore? 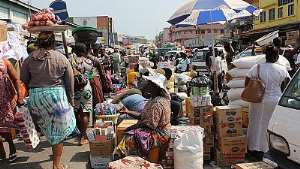 Folks, let me stick my neck out to say that the NPP’s Dr. Mahamudu Bawumia, characterized as Ghana’s Vice president, is a virus, a clear example of abject dishonesty that endangers Ghana’s democracy. And his records speak volumes to prove that he talks more theory than giving the world the theory that will substantiate those theories. The Adam Smiths must be crying in their decayed bones!!

it has become glaringly clear from my analysis of the hollow noise made by Bawumia, which cannot be supported by reality in terms of economic performance, that he has lost grips on himself and the constituency that he represents in politics. He has quickly slid from the top (as the NPP's hatchetman tearing apart the Mahama government on the basis of economics) to the very bottom of a laughable kite (who can't even monitor his own utterances to know that all that he had said to damn Mahama's handling of the economy has rebounded to hit him hard in the face). And he is helpless in this circumstances.

That is the more reason why when he comes out to talk about the fate of the Ghanaian Cedi and the borrowing spree on which he and Akufo-Addo are leading Ghana, he comes across as an unrepentant political novice cutting his own throat.

Here is the latest about him: "Vice President Dr Mahamudu Bawumia has expressed optimism that the continuous consistent decline of the Ghana Cedi against its major trading currencies especially the dollar will stabilise in the near future.

"Dr. Bawumia asserted that he, together with his team of economic managers, are excited about the prospects of the Cedi touting their ability to slow down the rate at which it fell. Government has defended the performance of the Cedi in the past 18 months despite its consistent drop especially the depreciation against the US dollar.

"At the second day of the Ghana Economic Forum in Accra today, Vice President Dr Mahamudu Bawumia disclosed that the performance of the Cedi against its major trading currencies is one of the best the country has witnessed.

"He said the slow depreciation is as a result of the prudent management of the economy especially the macroeconomy. The current value of the Cedi is GHC4.7 up from a 2016 figure of GHC4.2 in the first quarter of the year." (See it all at https://www.ghanaweb.com/GhanaHomePage/NewsArchive/Our-expectations-on-Cedi-stability-very-high-Bawumia-682647).

Folks, re-read the last part of the news report ("The current value of the Cedi is GHC4.7 up from a 2016 figure of GHC4.2 in the first quarter of the year.")

If Bawumia were in charge of his faculty, he won't stoop so low. If the Cedi-Dollar exchange rate at the time that Mahama was leaving office stood at GHC4.2 but is now at GHC4.7 under the watch of the economics guru that Bawumia claims to be, what doesn't it tell us about his hollowness?

And we are even not talking about the unconscionable vomit-eating about-turn in terms of borrowing. Bawumia and Akufo-Addo had stood on rooftops to condemn Mahama for borrowing Mahama to implement government programmes and projects (Akufo-Addo particularly saying that "Ghanafuo, ya ye mmoboro paa... ye ti sika so nanso ye (re) bre...." and Bawumia's flea-blown claim that he had worked at the Bank of Ghana and knew how much money could be mobilized locally for Ghana's good).

In power, they are collapsing banks and mortgaging Ghana to China for mere pittance. What nonsense is that? And they are deceiving themselves that by planting their bootlickers all over the place, they can succeed. No way!!

Can Bawumia step out onto the streets now to ask those directly affected by the plunging economy how they live? And can he spew his garbage of "fundamentals" to salvage the situation?

The rhetoric for CHANGE that put Akufo-Addo in power has turned out to be Ghana's woes. No wonder that the international community isn;t as eager about following or dealing with Ghana as it used to do under previous administrations. Contrived manouevres to bring under-pressure foreign dignitaries to the country won't change the picture. They will rather expose the government's desperation all the more. How will such visits put food on the plate of deprived Ghanaians misled by Akufo-Addo for political power, anyway?

I am just amused (if not amazed) by the abject ignorance issuing from the Akufo-Addo and Bawumia camps regarding how Ghanaians are gearing up to lock horns with them. And anything of the sort will have dire consequences. In less than 2 years in power, Akufo-Addo and Bawumia have planted the seed that will lead to their destruction. Mark it on the wall and monitor developments.

Folks, something must begin being done to nip these saboteurs in the bud. Although I am not the kind to agitate people to go outside the law, I think that given what has begun being done by the Akufo-Addo government with impunity, something most be put in place to pull the plugs.

It should take only one bold move to zap them all. We shouldn't continue to look on while they dig in to endanger the country's future. I fear for Ghana in their hands. More follows.

Joseph Yamin to clear weeds in all abandoned Mahama projects...
59 minutes ago