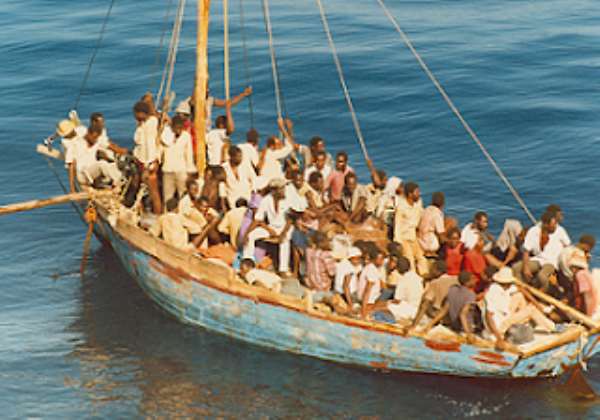 One year after the USA Centers for Diseases Control had named homosexual men and drug users as the most susceptible circles for opportunistic infections (OI) and Kaposi's sarcoma persons of Haitian were named as the third risk group.

Haitians, so-called boat people, who had traveled from Haiti to the USA by boat were kept in camps. At this time, 36 Aids patient (6.1%) from altogether 593 in the USA were from Haiti. Even in Haiti, in May 1982, eight weeks before the first competent in the USA publications in the USA, a Haitian Group for the Study of Kaposi's sarcoma and opportunistic infections (GHESKIO) was founded.

In 1983, Aids was investigated in Haiti and in Haitian immigrants. Contrary to the first Aids patients, it was not the lifestyle but the country of origin, which was said to be responsible for the illnesses.

CDC order for mass medical examination in Florida and New York, only one hospital in Miami

The illness of Haitians with Aids didn't come as a surprise to the USA authorities. Of the 34 patients reported on, 20 came from Florida. Apart from one patient, all were diagnosed in the Jackson Memorial Hospital in Miami.

In Conjunction with the Centers for Diseases Control, a study was initiated in January of 1982, relating to the susceptibility of Haitians of catching Kaposi's Sarcoma and opportunistic infections.

No reason was given commissioning this order. All Haitians going to hospital since January 1982 were tested for Kaposi's sarcoma and opportunistic infections. Based on the clinical picture offered by the patients, the medical staff would have even thought that Haitians could be affected by Aids diseases.

Before 1982, there was only one case of Pneumocystis carini-pneumonia and one case of Kaposi's sarcoma in the Jackson Memorial. For the majority of patients, the diagnosis was tuberculosis. This did not come under the definition of Aids until 1987. 17 out of 20 patients just came to the USA after 1977.

Why did a few cases of rare diseases among persons interned at a certain time in camps make those responsible in the Jackson Memorial hospital, Miami, publish that all inhabitants from Haiti could possibly be affected by Aids.

Even in New York, the first ten Haitian Aids patients were treated in one and same hospital. Here too, tuberculosis was diagnosed in the majority of cases. An HIV background could only be known to adepts.