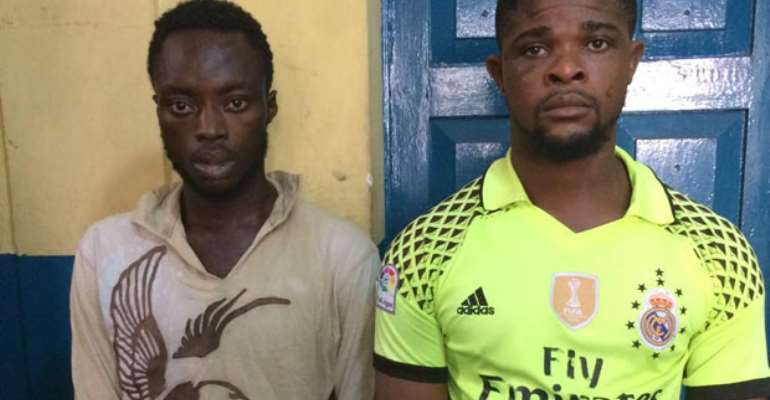 The Anti–Armed Robbery Unit of the Criminal Investigations Department (CID) has finally apprehended two persons who brutally killed a taxi driver after snatching his vehicle at Nkromokrom, near Abura Dunkwa in the Central Region.

They have been identified as Mathias Fenyi, aka Kwadwo Peter, 23 and Isaac Quayson, aka Osofo, 24.

The deceased, Evans Edu, aka Kwesi Korankye, a taxi driver, was strangulated by the suspects.

The two men dragged him out of the vehicle and stabbed him in the eyes, testicles and abdomen after which they used his car to run over him.

The two men drove the vehicle to Accra to sell at a cost of GHC14,000.

According to reports, Mathias, a close friend of the deceased, called him on phone to inform him that a friend needed his services at Yamoransa Junction.

The victim, in charge of a Toyota Yaris taxi with registration number GE 5115-18, arrived at the Yamoransa Junction and met Mathias, who introduced Quayson to him.

The two suspects asked the deceased to drive them to Nsanfo to collect money from someone.

Quayson, who had a kitchen knife, sat directly behind the deceased while Mathias was in the front passenger seat.

The two led the victim to the outskirts of Kramofokrom on a deplorable road. Mathias held his neck while the vehicle was still in motion and managed to put off the engine.

The reports said Quayson strangled the driver and when he fell unconscious, the two pals dragged him out of the vehicle.

Mathias collected the knife from Quayson and stabbed his friend several times in the abdomen, face and testicles.

They threw the knife into a nearby bush and drove the vehicle to Asafora, near Biriwa where they bought sachet water to wash the blood on the vehicle.

The two suspects also threw the mobile phone of the deceased into a nearby bush but took an amount of GHC120 which was his daily sales and drove to Accra to sell the vehicle after removing the registration number.

Upon interrogation, Quayson mentioned Mathias as his accomplice and led the police to arrest him at Egyaa No 1 near Cape Coast.

They both admitted the offence and are currently in police custody awaiting prosecution.