Smiles On The Face Of Guo D/A Primary School As Lack Of Furniture Is Now A Thing Of The Past. 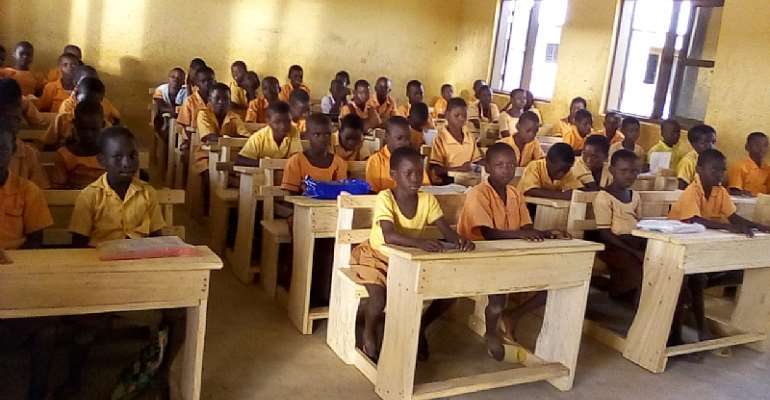 There is no gainsaying that one life transformed by education has the propensity to affect generations. The widely published article about the predicaments of the pupils at Guo D/A primary school has relieved them of their debilitating major problem, furniture crisis. This happened after some benevolent persons sighted the article I published in the media outlets on 4th June, 2018, titled "The Predicaments Of Teachers and Pupils at Guo D/A Primary School".

The purpose for publishing that article has been accomplished and I therefore wish to use the same media outlets to profoundly extend my heartfelt appreciation to all those who read the article and drew the attention of others to it. The teachers and pupils of Guo primary are now rejoicing as their major and aged problem has finally become a thing of the past. They are grateful to you all.

It is often said that every problem that is identified is partially solved. Usually, the problem solver is not far fetched from the catchment area the problem is identified. The Nakyea family of Guo Tayaga after perusing the article published in Ghana Web, Modern Ghana, etc. responded positively to it with alacrity not because they are from the community but because the story actually touched their heart.

As I indicated in my previous article, Guo D/A primary school has the highest numerical strength in the district. This results in a class containing more than sixty pupils against the GES policy of forty-five (45) pupils per a teacher.

The Nakyea family who were touched by the unpleasant and deplorable condition under which these pupils were studying, wholeheartedly donated two hundred (200) dual desks to the school. This family has in no doubt put live into the education of these pupils.

The pupils who were overly excited could not conceal their joy when I visited them the day after the donation exercise. The pupils who could not see a clear cut dichotomy between the cow boys in the village and themselves were then happy that they could clearly distinguished themselves from the cow boys since they look neat till they close from school. Their uniforms do not become dirty as it used to be while they were in class. Pneumonia and the other cold related diseases are far from them, now that they have desks. They are also very optimistic that generally, their academic performance will see a monumental improvement. This is because their handwriting and effective supervision of their work by their teachers will be improved since the classes are no longer in the state of disarray.

Parents and teachers were equally exhilarated as this age-old problem has finally been addressed. They are hopeful that the future of their children can now be foreseen to be bright. "Now they are students. They used to come home very dirty. We could not decipher whether they were indeed students or cow boys". In fact, we are so happy that we cannot find words to express our deepest appreciation to this generous and kind family of Mr. Nakyea. God will greatly bless them and give them long life".

As I have always said, the downfall of a man is his inability to remember where he comes from. The magnanimity showed to the pupils of Guo primary school by the Nakyea family will forever raise the family to a higher pedestal as the blessings of God and that of their ancestors shall flow unstoppably. What is more blessing than this?

Sadly, I was taken aback when some political actors from the district thought that I am exposing their lackadaisical and indifferent attitude towards the education of these innocent children. It surprises me when people I considered mature and learned, read the article with political lenses. This is sardonic and lugubrious. People I thought they were developmentally oriented and would laud my effort to remedy the deplorable situations these innocent children were learning under, rather sounded so artificially pedestrian. God saves us.

Sincerely speaking, I was terrifically flabbergasted when a highly respected elder from the district called me and sounded so threatening to me. He said I would be taken on for publishing articles of this kind if I don't seek permission from the DCE, the district director of education, etc. I could not believe my ears. Does one actually need to consult the District Chief Executive before publishing an article, if I may know? Does one also need to consult the District Director of Education before publishing an article on the plights of students in some schools in the district? These were some of the questions I was asking when that person called me. I would be highly grateful if anybody could help me with answers to the above questions. I am a student who is always ready to learn. So your answers are very much welcome and appreciated.

Why must people invariably want to politicise everything anybody is doing? In fact, Ghanaians must desist from this weird behaviour. An article that was objectively written with no iota of political colour was still read with political lenses. This is unfortunate!

Ghanaians and more especially "Nandomee" should wake up. We are far behind. The over politicisation of virtually every attempt is the very foundation for so many failures. That is the reason for our backward progression. We seem to have copied wrongly, the politics of our colonial masters. Politics is meant to develop the nation and not to retard development. It is not meant for the servants (leaders) to amass wealth for their families and their generations yet to be born. Must we organise a funeral ceremony to morn the death of common sense in our leaders to draw their attention to these basic facts? No! Ghana seriously needs a revolution to make solutions. This reminds me of what Bob Marley once said, it takes a revolution to make a solution.

Of course, I am not unaware that it's the responsibility of the District Assembly to provide the desks. But I'm also not oblivious of the fact that each and everyone of us has a sacrosanct responsibility as a responsible citizen to complementing the effort of the government. So why is it then a crime publishing an article that exposes the predicaments some people are facing so that magnanimous persons in the like of the Nakyea family to help ameliorate them?

In conclusion, I want to passionately use this platform to suggest to the people of Nandom and Ghana as a whole to eschew the over-politicisation of frantic attempts made by individuals or groups as their contributions to improving the lives of people in the district and Ghana at large. I refuse to be cowed-down in this course that I'm championing. The district is a new one hence it requires more hands on desk to transmogrify it so that it will be at a level-playing ground with the old and developed districts in the country. I end this succinct piece with this wise saying, "the proof of wisdom is the wish to learn even from children".