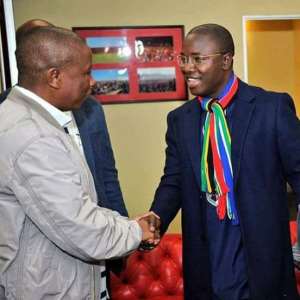 As a leader, part of your job is to inspire the people around you to push themselves -- and, in turn, the company -- to greatness. To do this, you must show them the way by doing it yourself.

Mahatma Gandhi of India accomplished through his actions: he spent most of his adult life living what he preached to others. He was committed to nonviolent resistance to protest injustice, and people followed in his footsteps. He led them, and India, to independence – because his life proved, by example, that it could be done.

Although Gandhi's situation is very different from what we are experiencing, the principle is the same. When you lead by example, you create a picture of what's possible. People can look at you and say, "Well, if he can do it, I can do it." When you lead by example, you make it easy for others to follow you. A case with Hon. Jefferson T. Koijee and Julius Malema, Lord Mayor of the Monrovia City Corporation and Commander in chief of the Economic Freedom Fighters of South Africa respectively.

Upon his stay in South Africa as one of the panellists in the just ended African Capital Cities Sustainability Forum, the Lord Mayor of the Monrovia City Corporation, Hon. Jefferson T. Koijee meets with Hon. Julius Malema, Commander in chief of the Economic Freedom Fighters -- EFF.

His ad hoc visit to the vibrant leadership of the Economic Freedom Fighters of South Africa was very much palatable and congenial. The two great sons of the African continent, Jefferson T. Koijee and Julius Malema had some important discussions relating to the bringing together of many young men and women around the continent to become vigilant decision makers.

The leadership of EFF contemporaneously striked a bargain to host the first assemblage of young and brilliant revolutionaries of the Revolutionary National Youth Laeague of the Coalition for Democratic Change --CDC in South Africa next month in an effort to effectuate a strong and strategic relationship between the two institutions.

The Commander in chief of the Economic Freedom Fighters of South spoke to Jefferson T. Koijee with a sally: "I have followed your history and your role played as a youth leader in Liberia. You are a great man who has been to jail, but I haven't." Speaking to Jefferson T. Koijee in the meeting, Julius Malema also expressed his esteem for the President of Liberia, His Excellency George Weah.

We've seen just how powerful it can be to lead by example. When leaders practice what they preach, it can be at all times possible for a team to work together successfully. Good leaders push their people forward with excitement, inspiration, trust, and vision. If you lead a team that trusts you, productivity will increase. Enthusiasm appears. The vision you're trying so hard to make happen may gain its appeal, all because your team trusts you always.

Good leadership takes strength of character and a firm commitment to do the right thing, at the right time, for the right reason. This means doing what you say, when you say it. If your team trusts you, you'll probably lead them to greatness.

Leading – and living – by example isn't as hard as it might sound. It's really the easiest path. If your team knows that you'll also do whatever you expect from them, they'll likely work hard to help you achieve your goal. And so it is with two great sons of the African continent, Julius Malema and Jefferson T. Koijee.