GOD is an African! 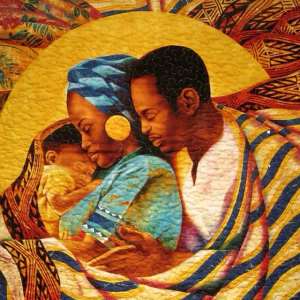 Much has been discussed about what and who GOD is, male or female, with face or a power force, caring for his people while yet punishing them with famine, earthquake, diseases and world wars. Bright minds over centuries, believers and atheist alike, have controversially thought and fought over this fundamental question. Yet, the answer is so simple and near to us: he is a black African!

The scriptures teach us that GOD created his people, us humans, in his own image. The first human remains were found in the country of Tanzania in East Africa. Adam, the first human, is the word for “Black Man”, another evidence that GOD is a black African by himself.

To know about GOD is by scripture, to believe in him is by decision and to trust him in all we do and be part of him in us is by personal experience in our heart.

The White Man has seen Christianity and for that matter GOD, as an intellectual journey, a matter of brain capacity and rational understanding. Book filled with words and ideas of how GOD is, rejection by atheist of such an idea as sciences has proven the creation of the world in a different way, being convinced that no merciful GOD does exist as such a force would never punish his people but guide them with tenderness and love, with passion and empathy for the mistakes they make.

It is interesting to observe, Saints are mostly White, while black Saints are no heard of. Saints are stated in the Holy Bible on many occasions not by race or location, but by function and experience. Saints are specially selected believers of GOD to perform miracles for him on earth and testify on his behave of his heavenly kingdom. To become a Saint is by declaration of the White Man over humans that have had a strong personal and emotional experience with GOD that they showed and shared with the outside world for them to understand and believe, GOD is a living and doing GOD and able to perform what he declares and decides for his people.

In religious matters, the White Race is haunted by its intellect, while black Africans come from an emotional background in which JuJu (witchcraft), the fight between GOOD and BAD (GOD and Demons), is very prominent and at the forefront of life. Playing music in public or homes means for black Africans to dance to the tune in their own style, they cannot get away from it, while White people start thinking first when hearing music, deciding whether it would be appropriate to dance and if moving along which moves would be the right and accepted once. Africans feel first before thinking, Whites think first before feeling.

The very first forms of humans were feeling the world around them; cold and rain mend to cover in caves, feeling of hunger and thirst to look for food and water; working of male testicles and female eggs pushed them to multiply and be fruitful. Over time intellectual capacity helped us to develop human behavior to become what we call “civilized” with various cultural achievements in different country around the globe.

It is this basic human behavior, our instinct like life, our emotional capacity and capability, that draws us closer and closer to GOD and help us to experience him in our heart by which GOD takes total control over us in any situation we find ourselves in without us having to think by ourselves, but to follow the inner voice that dominates us, the Holy Spirit in us.

While the White Man tries to make sense out of it all what happens to him and around his personal limitations, the Black Man cries out to GOD for help and mercy from his heart and believes in everything that happens, the will of GOD has taken control. Emotions help us not to have any doubt but total trust diving into our very own existence, while the intellect always questions what happens and what does not occur and why not searching for ways to make the impossible, the not decided for decision, after all possible.

To come to GOD closer and close is therefore only possible through our emotions on a very personal level, by our own experiences. That reason the Black Man is clearly blessed; the White Man has to struggle for his blessings. As GOD has blessed the Black Man so much, he is closer to him than the White Man (Jesus Christ was not pure White) and as this is the case, another proof is given that GOD is an African.

Why is he allowing Africa still to be a continent that suffers generation after generation? Look into King David´s life, Job, and Abraham, the Jewish Prime Minister under the Pharaoh etc. and you will understand…this world is for GOD only, and his love is for the once that carry him in their hearts and feelings.