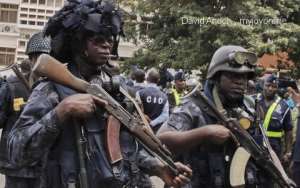 It appears the police have cocked their guns, laced their boots ready for combat in a desperate attempt to end the reign of armed robbers who are raining terror on residents of Oyibi, Adenta, Dodowa and its environs.

Joy News has learnt the police have deployed men, well equipped to fight the increasing spate of robberies in those vicinities.

A resident who shared his testimony with Joy News Editor Evans Mensah said he heard the blaring sounds of gunshots in the neighbourhood Wednesday night, something they have become accustomed to in the vicinity. However when he called the police, they arrived at his residence in a speed of light, in three patrol vehicles loaded with police and military personnel, he told Evans Mensah- something that was never the case in the recent past.

They had already arrested two suspects said to be behind the firing of gunshots in the area.

Checks by Mensah indicate the patrol was led by the Commander in charge of Police SWAT team Chief Superintendent Theodore Hlormenu.

According to Superintendent Hlormenu the Director of Operations COP Dampare redirected logistics and personnel to the area notorious for armed robbery activities.

In Oyibi for instance, a 67-year-old man was killed by armed robbers after they allegedly hit his head with a slab before stealing an unspecified amount of money in the house.

The daughter of the deceased person was also nearly raped by one of the robbers after she was forced to remove all her clothing.

In yet another case of armed robbery attack in the same vicinity, the robbers were said to have spent three hours in the house of the victims, robbing, eating, drinking and using toilet facilities in the house.

The area is said to have recorded about 20 robberies in 2018 alone and the residents live in a state of fear.

Joy News’ Maxwell Agbagba had taken eyewitness accounts of some the victims in the vicinity, including the lady who was stripped naked by the robbers.

But for the appeal of one the robbers, she would have been raped.

However, there appear to have been a surge in patrol activities to combat the spate of robberies in the area, Evans Mensah reported.

It is not clear yet how sustainable it will be.
Story by Ghana|Myjoyonline.com