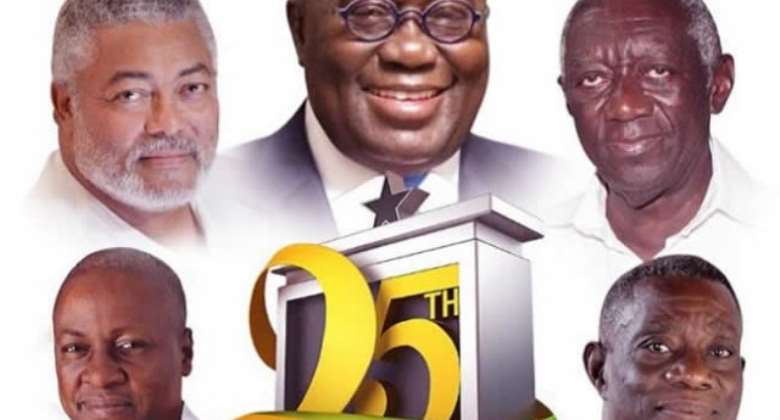 A Republic state is defined as a state in which the supreme power is not inherited, but rather rests in the body of citizens entitled to vote, and is exercised by representatives chosen directly or indirectly by them. Others also define it as a type of government that has no king, queen or other monarchy, and where the people are sovereign. Every Republic has its constitution.

Ghana attained her independence in March, 1957, but she was not considered a Republic until she attained her Republican status in 1st July, 1960 after various negotiations with the Queen of Great Britain. Actually, Ghana was not deemed to be a Republic between March, 1957 and July, 1960 because she was still under a partial control of Great Britain's Monarchical system of government, and as such did not make her a Sovereign State because the Queen was still her Ceremonial Head. Example: Laws passed by Parliament of Ghana had to be assented to/accepted by the Queen before they could be used.
In all, Ghana has experienced four different Republics.

The First (1st) Republic of Ghana started from July, 1960 and had the Convention People's Party (CPP) with its leader Kwame Nkrumah as the first party elected under it. It was guided by the 1960 Republican Constitution. This constitutional/democratic form of governance lasted until it was overthrown through a coup in 1966, meaning it only lasted for about six (6) years.

The 1st Republic was overthrown through a coup d'etat in 1966 by the National Liberation Council (NLC) headed by Lieutenant General Joseph Arthur Ankrah. Lt. Gen. Ankrah was later replaced by Lt. Gen. Akwasi Amankwa Afrifa. Ghana then came under an NLC Military form of governance/Military Junta until it paved way for general elections in 1969.

The Second (2nd) Republic started in 1969. The People's Party (PP) under the leadership of Dr. Kofi Abrefa Busia won the first election under it. After the election, Dr. Busia became the Prime Minister and Edward Akufo-Addo became its Ceremonial President. It was guided by the 1969 Republican Constitution. This democratic form of governance lasted until it was overthrown through a coup in 1972, meaning it only lasted for less than three (3) years, it was approximately about two and a half years.

The 2nd Republic was overthrown by the National Redemption Council (NRC) under the leadership of Colonel Ignatius Koto Acheampong through a coup d'etat in 1972. He headed the military form of governance of Ghana until he was overthrown through a Palace Coup in 1978 by the Supreme Military Council (SMC) headed by General Fredrick Akuffo. He also ruled for only about a year then he was overthrown by the Armed Forces Revolutionary Council (AFRC) headed by Flt. Lt. Jerry John Rawlings in June, 1979. Flt. Lt. Rawlings allowed for general elections in September, 1979.

The Third (3rd) Republic started from September, 1979, it was guided by the 1979 Republican Constitution. The People's National Party (PNP) under the leadership of Dr. Hilla Limann won the first election under it. This democratic form of governance lasted until it was overthrown through a coup on 31st December, 1981, meaning it lasted for only about two (2) years.

The 3rd Republic was overthrown by the Provisional National Defense Council (PNDC) under the leadership of Flt. Lt. Jerry John Rawlings through a coup d'etat on 31st December, 1981. His military form of governance lasted until 7th January, 1993 despite him paving way for general elections in November and December, 1992. Before the November and December, 1992 general elections, a referendum in April, 1992 was held under the watch of Flt. Lt. Jerry John Rawlings to verify whether the citizens of Ghana either wanted a military or a constitutional form of governance, and also the approval of the 1992 Constitution that had been drafted.

The Fourth (4th) Republic started on 7th January, 1993, and as at the time this article was written (January, 2018), there has been no obstruction to it, meaning it has lasted for twenty-five (25) years. It is guided by the 1992 Republican Constitution. So far (as at January, 2018), there have been 7 successive governments under this republic, below is the list;

According to the 1992 Republican Constitution, each person has a maximum of two (2) terms/tenure [eight (8) years] to lead the country as its President, with a four (4) years duration for each tenure.

A careful analysis of the table above shows that only two political parties [National Democratic Congress (NDC) and New Patriotic Party (NPP)] have ruled under this republic sequentially in an eight (8) years interval. The table again indicates that H.E John Mills and H.E John Mahama (both belong to NDC) have only finished one of their two terms they are entitled to, H.E Mills died and H.E Mahama did not get the nod for the second time as the people failed to re-elect him. It also happened to them in a sequence, first was H.E Mills and immediately after him, it happened to H.E Mahama. The 4th Republic is yet to experience a political party govern for only four (4) years or twelve years or more before its removal from power.

More over, there have been many assumptions as to what might have caused Flt. Lt. Rawlings to allow for a change of rule from a Military one to a Democratic one, but below are some of mine;

i. International pressure from United Nations (UN), the Bretton wood institutions and other super powers like United States of America (USA) and Britain.

iii. The regional forums organised from 1990 by the National Commission for Democracy (NCD) to solicit for the citizens' views on what kind of rule they wanted, and its subsequent approval of the 1992 constitution and the appropriate kind of governance the people wanted through the April, 1992 referendum.
[Referendum: when a legislative act is referred for final approval through a popular vote by the electorate]

iv. The acceptance by H.E Jerry John Rawlings to allow for a change from a military to a democratic form of governance.

Further more, from my point of view, below are what might had demotivated or prevented, or may be demotivating or preventing a coup d'etat from 1st January, 1982 through to the time this article was written (January, 2018), especially under the 4th Republic;

i. The inclusion of some members of the former ruling party, the former opposition parties, technocrats and others such as H.E Kufuor, Hon. Dr. Obed Yao Asamoah, Prof. Kwesi Botchwey, Mr Harry Sawyerr, Alhaji Mahama Iddrisu by Flt. Lt. Rawlings in his military form of governance from 31st December, 1981-7th January, 1993.

ii. Most International and local laws are not in favour of coup d'etat and military form of governance.

iii. The tolerance and vibrancy of the opposition political parties and the citizens of Ghana.

iv. The liberalism, independence and vibrancy of the media.

v. The intensive and extensive education of the citizens by the CSO, Media, National Commission on Civic Education (NCCE), Schools, Family, Friends, International Organisations and others on the bad effects of coup d'etat and military form of governance.

i. List of heads of state of Ghana, Wikipedia