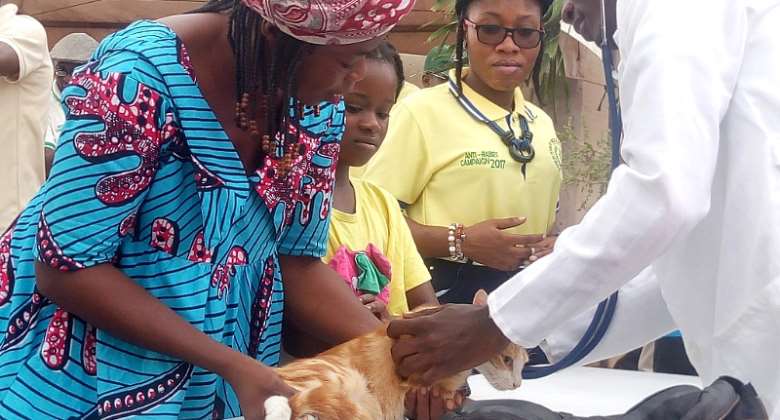 The Kwame Nkrumah University of Science and Technology (KNUST) chapter of the Ghana Veterinary Medical Students Association (GVMSA), has launched a campaign to vaccinate at least 1,000 cats and dogs in the Ashanti region against rabies.

This is to help reduce the cases of rabies recorded in the region and across the country.

President of the GVMSA-KNUST, Benjamin Kissi Sasu, made this known during a vaccination exercise held by the students for cats and dogs at the forecourts of the Baba Yara Sports Stadium.

In marking the World Rabies Day, students of the GVMSA-KNUST visited the Ejura and Kotei Electoral areas, and Aputuogya in the Bosomtwe district to sensitize people on the need to vaccinate their pets, to prevent the risk of getting infected by the deadly virus.

Benjamin Kissi Sasu said the exercise is important because, “in every ten minutes one person is dying of rabies, this is why we have joined in the celebration and we are saying let’s end rabies together, by 2030, we shouldn’t have any human die out of rabies.”

The Principal Veterinary Officer, Dr. Marlon Mensah, said it is very important for “owners to know how to handle their pets, that is responsible pet handling, or dog ownership.”

He said there are enough vaccines for both pets and humans against rabies.

“As at now, we have enough vaccines for humans, and we have vaccines for the pets, the dogs too. If someone is bitten and we suspect that the dog who bit the person has rabies, then we give the person post-exposure prophylaxis, we don’t wait for the person to get rabies because if the person gets it, he or she will die,” he said.

Both the World Veterinary Association and the World Medical Association, have called for a total elimination of dog-transmitted human rabies by 2030.