Improving The Rapid Falling Standard Of Education In The Upper West Region, The Role Of UWESU 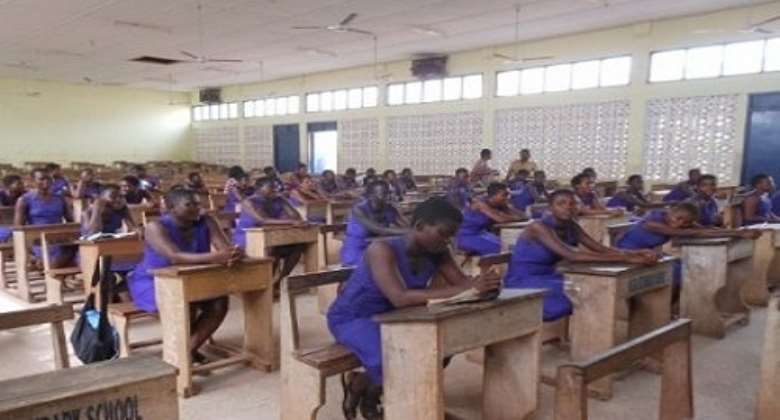 The Upper West Students' Union on 17th of June, 2017 organized a maiden quiz competition among the senior high schools in the region as one of its core mandates. Since the birth of UWESU-National in 2011, this competition was first of it kind organized by UWESU, I stand to be corrected.

The competition came to fruition through the fiat and instrumentality of the selfless, gallant, indefatigable current president of the union, Mr. Biekuuh Kingsley, a medical student in the University for Development Studies, Nyakpala Campus.

The Upper West region is made up thirty (30) Senior high schools out of which fourteen (14) partook in the competition. Below were the participating schools: Wa Technical Senior High (Kpong Tech.),

The president of the union, Mr. Biekuuh Kingsley, addressed the student body at the Queen of Peace Senior High School Hall.

He said "this competition is not meant to get the best schools but to foster unity among the various schools". He added that "this program also seeks to motivate and encourage students to take their learning seriously. It is a platform for you all to socialize and make new good friends".

Indeed, I must admit that the program was well attended. Though some schools couldn't make it, the hall was full to capacity. The campus of Queen of Peace was was fairly represented by all the colours you can think of as all the fourteen schools were in their acting uniforms that were of different attractive, catchy and sight appealing colours.

The competition was categorized into two sessions. The first session was for the schools that offer pure Science. That is Physics, Chemistry and Biology. The participating schools for this session were

The chairmam and the quiz master humbly pleaded with all the students and the masters who were present to collectively and in unison cooperate with them to make the program a success. The quiz master Mr. Foroko is a Science tutor in NJA College of Education. He, in all sincerity, displayed his unquestionable subject area competence.

The first session of the competition came to an end with Lassie Senior High School emerged winners with thirty-one (31) points. The Second position was won by Islamic Senior High School with twenty-three (23) points and Queen of Peace, the host school, came out with twenty-two (22) points putting them on the third position. The rest are, Lawra senior high got the fourth position while Wa Technical senior high School got the firth position.

The second session was represented by seven schools. Below were the schools; Brifor SHS, Ko SHS, Ullo SHS,

Daffiama SHS and Tumu SHS. This session was characterized by General Science questions since the participating schools are not offering Pure Science. The euphoria that characterized the competition was at its peak when there was a tie between three schools. The quiz master employed his intellectual excellence to break the tie before the respective positions were meritoriously conferred on the participating schools.

At the end of the second session, it was obvious that Eremon Senior high School was crown the best in that competition followed by Ullo Senior high as the second best and Tumu senior high occupied the third position. The rest were T. I. Amass fourth (4th), Daffiama senior high firth (5th), Ko Senior high sixth (6th) and Brifor senior high seventh (7th).

The program came to a successful end with the declaration of results and onward giving of awards to all participating schools with recourse to their respective positions.

The executives of the Upper West Students' Union National (UWESU-N) are poised to doing everything within their capacity to improve upon the speedily falling standard of education in the region. My encounter with the president of the union, Biekuuh Kingsley, unfolded lots of plans that are far advanced to ensuring swift realisation of this task.

He confidently assured me that he and his executives with the support of the sub-unions executives and their members will work assiduously to exhaust this year's action plan which will go a long way to transmogrify the academic performance of students in the region. He quickly added that subsequent activities are going to be intriguing and the purpose for such activities is to demystify the mindset some students have about tertiary institutions and the programs they run. He said one of those programs is the 'Garibanye' Award Scheme which comes off 15th July, 2017 and he hopes to see a multitude of people in attendance.

In conclusion, the president, Biekuuh Kingsley, humbly pleaded with all education directors of the region, officers, opinion leaders, students and stakeholders to support UWESU in any small way they could to enable them champion the crusade of academic excellence in the region.

Be ready to accept postings to where your services will be n...
9 hours ago