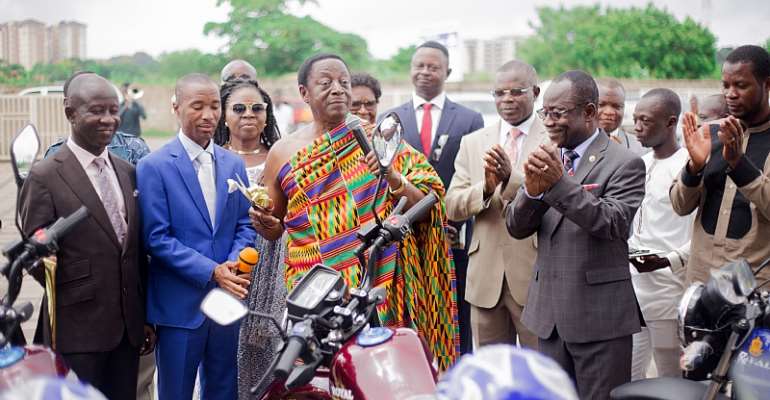 Revival Restoration Centre Assembly of God (RRC A/G) has presented six motorbikes to some churches it planted during its 2017 Missions Outreach.

The beneficiary churches are located in Apradan, Aweregya, Pra River and Dadieso all in the Kwahu West District of the Eastern region.

The others are located in Salaga in the Northern region and the other in the Volta region.

At a colourful ceremony held on Sunday, June 11, 2017, to officially handover the motorbikes to the beneficiary pastors, Lead Pastor of RRC A/G, Apostle Dr. Alex Kweku Nkrumah, noted that the church started embarking on missions outreach some 25 years ago and has given out 16 motorbikes so far.

He explained that decision to give motorbikes to some churches it plants is as a result of the very bad nature of roads in the areas coupled with distance between the residence of the pastors and the planted church.

“Some the pastors travel several kilometres culminating into hours before reaching the church. This makes life difficult for them and their families. Only the strong-willed will stay to continue the kingdom work.

…Waiting for taxis or ‘trotros’ could take hours because only a couple cars ply the routes due to the bad nature of roads in the areas. This is why we’re supporting our brethren in this district,” he said.

Presenting the motorbikes to the pastors, Chairman of the Welfare Committee at RRC A/G, Dr Kwabena Duffuor, said that giving to support God’s work has its rewards which rewards according to him, are immeasurable.

He charged Christians to give towards God’s work irrespective of their income levels citing Mary Magdalene, Joanna, and Susanna [ardent supporters of Jesus’ ministry (Luke 8:1-3)] and the widow in the Bible who supported Elijah’s ministry.

Receiving the motorbikes on behalf of the pastors, General Secretary of Assemblies of God (A/G) Eastern Region C, Rev Peter Abenneh, expressed the gratitude of the pastors and the entire A/G to RRC A/G for their benevolence

He assured that the motorbikes will be used for the intended purposes as well as serviced regularly to ensure that they last.

Rev. Abenneh prayed for God’s blessings on the entire congregation for their support for missions.

Some 5, 240 people benefitted from RRC A/G’s 2017 Missions Outreach which was held in the Kwahu West District of the Eastern Region of this number, 2, 462 were saved.