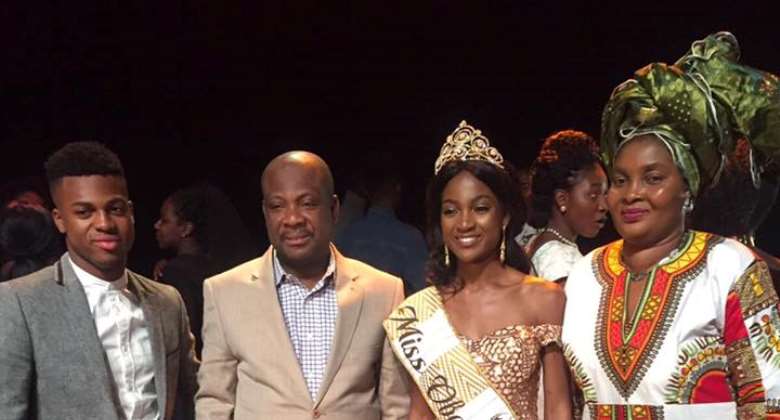 Meredith Sarpongmaa Agyin has been crowned winner of the maiden edition of Miss Obaasima 2017 last Friday 7th April.The newly crowned Miss Obaasima is a Communication Management student at the University of Leuven, Belgium. The 20yr old is one of the children of an affluent and a successful Ghanaian businessman famously know as King Solomon based in Antwerpen.

The event was set up in 2015 by a renowned Fashion Designer Ama Wusuwaah of Wusuwaah Diary's to empower Ghanaian young women in developing the confidence they need to achieve their personal best, the Pageant will enable contestants to shine a spotlight on Ghana through a fashion show and cultural performance, which will hereby educate and inform the world about the beauty of Africa.

The contestants are judged on their levels of Beauty, personality, creativity, confidence, intelligence, modelling, Fashion sense and Quality of response to Questions.

The pageant was hosted by Deborah Vanessa and Newcomer Mr.Charles.

In attendance were the Ghana diplomatic corps in The Kingdom of Belgium and The European Union. Led by H.E. Mrs. Novisi Abaidoo, Frank Acheampong (Black stars & R.S.C. Anderlecht) and high profile guest from Ghanaian Community Elders to public figures and dignitaries.