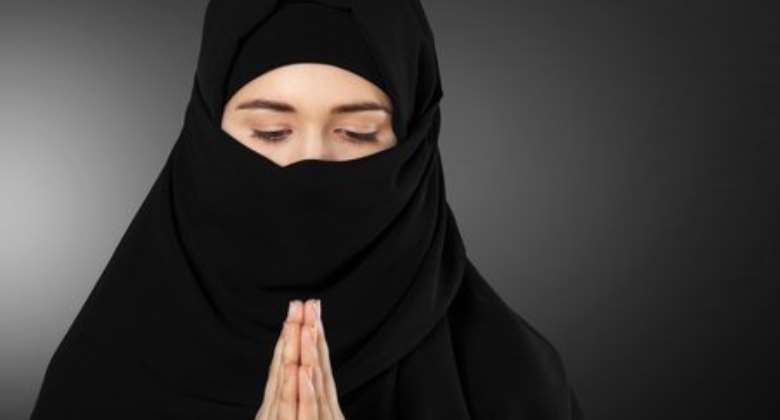 Three weeks ago, I was with Ouaris on a motorbike. It was dusk. We were going to his house. On our way, we met this fair-skinned beautiful lady. She was also on a motorbike. She dressed in a beautiful black hijab that caught my attention. Typical of my competence in fine arts, I complimented her not so loudly that she could hear me. As a matter of fact I said it softly. But at least Ouaris heard me clearly.

"This lady looks decent and beautiful in her hijab.", I complimented her softly. "Hmm!", Ouaris sighed. "Massa, you're an idiot.", I insulted him as usual. "That girl is a Nagasaki trader. She sells her body.", Ouaris revealed bluntly. I was utterly shockprised and I thundered, "Kaman how?" "That lady looks so innocent, decent and pretty to be in that low-life and demeaning business.", I added. "Listen, I am in this area and I know her like a pastor knows his congregation. Her name is whatchamacallit, you can ask Seedorf about her when we get home. I can also take you to her trade center around Alhassan Hotel in the night and trust me, you will see her live and colour in her trade costume winking and waving for customers.", Ouaris provided further and better particulars. "Oh! That's debilitating to my feminine senses.", I lamented. "Massa, don't do that and say you love her ooo!", Ouaris teased. "My friend don't be silly", I responded. "Well, she actually lost her parents when she was a kid and most probably survived all these years in that kind of trade.", Ouaris profiled her briefly.

The feminine in me got weak and my day was spoilt. I felt the urge to meet her and talk her out of it. I actually thought of approaching her on the blind side of Ouaris but I thought I couldn't risk my image prowling in search of her at commercial sex worker's joints.

I really was sad. She was one of those ladies that at cursory glance, one's heart would tumble. She was beautiful by Miss Malaika's auditioning standards. I couldn't just imagine how such a fine soul would be a stick of khebab for anyone with a few dirty cedi notes.

Why was I surprised? Because she was in hijab. She appeared innocent and decent. She didn't look like a call girl. Do you think I would've been surprised if she was wearing bikini or some tattered skin-tight clothes that prop up her breast in ready-to-suck style or squeeze her buttocks in a manner that magnetise the eyes? No! Many women in hijab are desirous of righteousness regardless of inherent suppressing factors.

The hijab covers multitude of sins. The hijab is a symbol of modesty not purity. The hijab is an effort and commitment to please one's maker. There are many crimes committed in the hijab. There are actually ninjas in hijab. So, the hijab is not a final arbiter of godliness but certainly can't be discounted as a way of explicit show of wishful piety and modesty.

The hijab must not be used to measure Muslim women but Muslim women can be measured by their hijabs. The use of hijab as a marking scheme for believing women is inadequate because it is only a path and not a destination of righteousness. As a matter of fact, hijab is not synonymous to Islam. A Muslim fundamentally is defined as one who observes five daily prayers. But it doesn't mean that you can observe your daily prayers in bikini at the public mosque or even in your own private room. Again, observing the five daily prayers doesn't guarantee one salvation according to the Islamic teachings.

I read Manasseh's fiction "Behind The Veil". I think it is a thematic representation of an ugly truth. Some of his mind's figments are common events in Muslim communities. For instance, I have witnessed instances where girls are gotten pregnant under Quranic tutelage of their instructors. However, the timing of his fiction is highly inappropriate especially at a time when there is a national debate on the hijab/veil. If it was written at anytime, I don't think it would've been greeted with this much furore.

Manasseh in his fiction attempts to, for a want of a better word, expose the grand hypocrisy of hijab crusaders. (Read Mallam Aminu's part). That is where he got it wrong. His fiction preaches godliness above mere hijab. It places premium on what's in one's heart rather than appearance. There is even a part that discourages wearing of hijab as he contrasts it with the hot weather. As a matter of fact, several portions of his fiction impugned grammar upon Islamic principles. Yes, that's my appreciation of the fiction. There is no common sense analysis in religion. Even the Bible said that the wisdom of the world can be stupid to God.

For instance, in Islamic jurisprudence, a committer of theft is supposed to have the hand cut off. Harsh? It's legitimate for some people to ask "Kaman how?" because it sounds absurd and outrageous. But Manasseh and I have to come to terms that the Islamic laws were not passed by our parliamentarians and they are not subjected to review and common sense debate. Islam as a religion comes with decrees, doctrines and dogmas. These beliefs may be bizarre but people who subscribe to these beliefs ought to be respected and probably allowed to lead the debate. And may be others can come in with a "bargain". That's religious tolerance. But to seek refuge under a fiction to express a hard diction may lead to friction.

The hijab debate is been hijacked largely by non Muslims who know next to nothing about Islam and they are brandishing around pseudo-religious and pontifical hooey with frantic attempts to be more Catholic than the Pope. The dog does not lead monkeys in their native dance simply because the dog is a good dancer.

Also, the debate on "remove first the log in your eyes" is an affront to logic. My inadequacies shouldn't be a yardstick for yours.

Religion is a dicey issue. When it comes to religion, people's common sense goes on vacation. Their hearts move into their mouths and their actions precede their thinking. Throughout the world, a lot of people at all times die more on matters of religion than HIV/AIDS, cholera, malaria, hunger and accidents combined. People don't take things lightly with their God(s).

So, we all have to be carefully measured in our discourse (fiction or nonfiction) and avoid all possible fis that has the propensity of starting religious effusions, squabbles and skirmishes.

My name is Hanan-Confidence Abdul, a Charlotte Osei crush, sapiosexual and conscientious feminist.

The writer is a senior nurse at Tamale West Hospital.