And Mardiya Wept At Poverty. After She Led The Nima Boy To The North 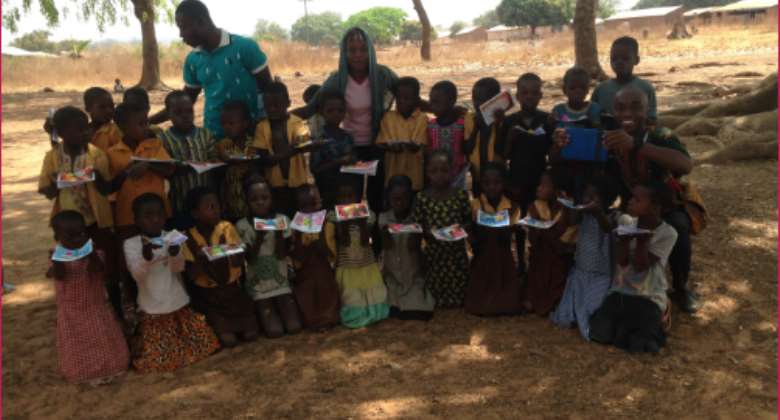 Before we embraced the year 2017, the farthest point I had ever reached in Ghana was Sunyani. In 2013, Dedlyne Crew, an entertainment group helped in organizing a Fashion show at the Catholic University in that town. They pulled me along as a member to go emcee the programme. So I had the chance of being in the Brong Ahafo Region of Ghana. That never erased the fact that I have been to the six other regions apart from the three Northern Regions of Ghana. And I must confess that I really longed to see that part of Ghana after reading a lot of literature on it.

That is partly the reason I gladly accepted to join Mardiya to the village in the Northern Region she told me about. The other reason is about her resolve. It is a worthy one. Dr. Joseph Schwartz in his book The Magic of Thinking Big stated that “when your neighbors ask you to represent them on a civic matter, accept. It helps you to become a community leader.” And I accepted.

Mardiya Suleman Cheiba is a graduate of the Ghana Institute of Journalism posted to do her National Service in a village called Nsuanayili in the Nanumba South District of the Northern Region of Ghana. Some of Nsuanayili’s surrounding villages are Bimbilla, the town of the Minister of Defense, Wulensi, Gbangbaliga etc. Upon her arrival at her post, Nsuanayili DA Primary School, she realized the squalor and indescribable level of deprivation in the school. She realized there is no way to teach the children in the examinable English language without being able to speak the Konkomba language. And she does not know how to speak the language. One other Service Person who could even speak Dagbani realized he could not do anything so he left. Mardiya never left the children who obviously need help. She decided to “light a candle instead of cursing the darkness.” She resolved to do what a singer termed “pass it on.” She upheld what the Keen Hearts Foundation captioned “the less privileged thrives mainly on our benevolence towards them. Nothing is too small; we can all give to the needy accordingly.” She came back to Accra to organize books, pencils, crayon, bags and other items really needed by the children to the village. To do that we embarked on what a friend termed “nationwide tour” because I kept stating the towns we reached on Facebook. The journey took us through the “Eastern Belt to the North then mid-section also downwards.”

So the journey began on last week Monday afternoon when the sun was blazing on all guns. It started from Agbogbloshie where the sea of sweaty bodies was racing against the hours of the day to make something for the pot. And if you have never been to the North, I believe Agbogbloshie will give you a gist of the cocktail of experiences you will get.

We started feeling the Northern spirit from Agbogbloshie and the journey on the bus. The journey availed to us the lovely and extreme nature our brothers from the North exert whatever human interactions they have. Their readiness to help the other person in need is peerless; their concern for another person in pain and their utmost sense of justice and fairness is unparagoned. Not forgetting how they uphold the honored virtue of greeting; and they do that beyond the required measure. It also explains why pockets of turbulences have always bedeviled that part of the country. In their extreme exertion of all human interactions, they want to stretch any issue to its ‘logical’ conclusion. Our journey took us through the Accra Motorway reaching the Adomi Bridge, through Hohoe, Nkwanta, and Kpassa right to curfew-struck Bimbilla. We had to wait for about thirty minutes to 4 am, the time the curfew is lifted before we entered the town that produced the Executive Secretary of the ECOWAS Commission. We refreshed ourselves and prepared ourselves for the journey to Wulensi.

Wulensi is the capital of Nanumba South District in the Northern Region of Ghana. The journey to Wulensi was an interesting one. A Good Samaritan (schooled with Mardiya at the Islamic University College, Ghana) with much difficulty got us two different riders who were Wulensi-bound to go along with us. It was a bumpy ride with dust all over our bodies coupled with the harmattan that had ‘opened its mouth’ the day before as residents claimed. At Wulensi, we met the Circuit Supervisor of Information, Communications and Technology in the Junior High Schools in Wulensi. We also met with the headmaster of Nsuanayili DA Primary School, our destination. And the journey to Nsuanayili began.

The ride from Wulensi to Nsuanayili was an interesting and educative one. Especially when I was behind the headmaster of Nsuanayili DA Primary School. I never left him taciturn. I made him speak. And he was ready with answers. I told him I am also coming from a deprived community in Accra where the height of our achievement as a people politically is the cementing of a few corners in town ‘lungus” and lorry stations. So we talked about many things on that almost an hour ride along the dusty and ‘ bronchitic’ road.

His status betrayed the situation in the village. As a young man, he was posted to head people very older than him because he has a Bachelor’s Degree. He tells of how the community is not interested in the education of the young ones because they see no need and value for education. All that the people are interested in is producing many offspring for the farms. He however extolled the qualities of one man who is the head of the School Management Committee for his unflinching belief in Education. It is of no wonder that his child is the one with the highest educational qualification in the community (still in the Teacher Training College.) The SMC chairman is the only one who represented the community to welcome us for our donation exercise. And he is the one who gave us yams as a token of appreciation.

The headmaster also told of how children come to school and have no concentration on studies for the day ab initio because there’s no food at home. So many come to school on empty belly. A lot also come but go back home (walk distances) to ‘eat’ during break times and return. (We saw many on the road on that quest.) No journalist gets there. No Media house (radio nor TV station) in the community. The community has no store where things are sold. No food vendor, not even sachet water seller. We had to buy sachet water in Wulensi before we took off. And I saw how the waters were carnivorously consumed when we got there. At the school, I saw for the first time the real manifestation of the politically- hackneyed term “Schools under trees.”

The children are hopeful in face but wretched and pathetic in situation. The children are willing to learn, some bare-footed, many without uniforms, some were just dropped off by their parents to excuse themselves to their farms, some very small yet have others strapped at their backs in school. A common question in English “What is your name?” saw the children’s faces struck with overwhelming shock and amazement, aghast at the language we were speaking.

These are innocent children who have long been defeated by their circumstances in life; yet they compete with others born in Glasgow, Lisbon, Cairo, Accra, Washington in the global world we find ourselves in now.

When I thought I had seen their situation in its all, I was greeted with another which really humbled me. Mardiya added to her donation, Ravensburger puzzles. The Headmaster and the teachers asked what that is. And she answered that it is a puzzle. The headmaster stated with all sincerity “I have never seen that before and do not know what it is.” Now that really humbled me. We all know the importance of such puzzles. They give children cognitive skills, problem solving skills, hand-eye coordination and helps achieve a set goal.

The ICT Circuit supervisor kept saying “I think it’s a good gesture. They are shocked. They have never seen such a thing before in this village.” The Headmaster made the children line-up holding high their books for a group picture. And that is where Mardiya wept. She says for people to line-up for a picture because of an exercise book (common one) is to her the height of pity.

I believe, any politician that tells us “we have moved Ghana to the next level” is either a joke or is really speaking before thinking. People are in Ghana but delinked from normal living. People are poverty walking in its human form. People just exist and not living, just waiting for the day they will be embraced by the cold arms of death to finish off their suffering. Politicians pay the people of Nsuanayili visits every four years. The most recent was the brother of the erstwhile President, Ibrahim Mahama, who came there two days before elections doing what he did more in the run up to the elections. These are the places charity organizations and philanthropists should channel their resources more to help revive the humanity in our brothers and sisters there. These are the people more deserving of help.

Chinua Achebe sums it up for us. In his book The Trouble with Nigeria, he stated “These are the real victims of our callous system, the wretched of the earth. They are largely silent and invisible. They don’t appear on front pages; they do not initiate industrial actions. They drink bad water and suffer from all kinds of preventable diseases. There are no hospitals within reach of them; but even if there were they couldn’t afford to attend. There may be a school of sorts which their children go to when there is “free education” and withdraw from when levies are demanded. The politician may pay them a siren-visit once in four years and promise to give them this and that and the other. He never says that what he gives them is theirs in the first place. The things that are uppermost in their minds are basic, like clean water. The politician agrees; but there is financial constraint now. The plans are drawn by my government; water will be flowing by 1986. Meanwhile I give you the most modern television station in Africa. Surely this will make you smile.”