And The Short Man Became The President Of Ghana 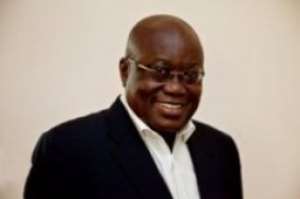 On January 7th, 2017, something spectacular happened in the political landscape of Ghana. Nana Addo Dankwa Akufo Addo (Nana Addo), considered a very short man took over the reins of administration from John Dramani Mahama, a reasonably young and tall man, as the president of Ghana.

The event ended the rule of the Johns in Ghana. Hitherto one had to bear the name John to be the president of Ghana: John Rawlings, John Agyekum Kuffour, John Atta Mills and John Dramani Mahama.

It also marked the realization that irrespective of individual’s inhibitions, Ghanaians choose their leaders from all parts of the country –that leadership in Ghana is not the preserve of any particular tribe or group. A look at those who have had the chance to be in the helm of affairs bears testament to this: Dr. Kwame Nkrumah (Nzema, Western Region); General J. A. Ankrah (Ga, Greater Accra); General Akwasi Amankwaa Afrifa (Asante, Ashanti Region); Professor Kofi Abrefa Busia (Brong, Brong Ahafo); General Kutu Acheampong (Asante, Ashanti Region).

Finally, it gave Ghanaians a new outlook in life – that persistency pays and also you can aspire to be whatever you want to be in Ghana. Nana Addo tried for the presidency and succeeded on his third attempt equating that of Professor Atta-Mills who also made it on his third and final attempt. It took Nana Addo some forty years of political education, struggles and development to reach the pinnacle of his political career – from the seventies through today. That is a tenacity of a heart.

Of particular importance to this write up is the idea that it ended the presidency of tall men in Ghana and ushered into office for the first time the rule of the height-challenged – Nana Addo, (President), Alhaji Dr. Mahamudu Bawumia (Vice-President- Not short) and Professor Oquaye (Speaker of the National Assembly).

Under normal circumstances Nana Addo’s height would not be an issue but for the denigration, vilification and deprecation he suffered in the hands of persons in official positions who sought to create the impression that people of his stature were not good enough to be elected to rule Ghana. Short people have been known to be popular in the entertainment industry – Messiers Kapwepwe, Adwoa Smart, Wayoosi, Osita Iheme (Paw Paw) and Chinedu Ikedieze (Aki) to mention only a few.

At the 2010 Oguaa Afahye festival then President Mills reportedly ignored Nana Addo when he greeted the people and even refused to mention his name when reading his speech. Other members of the then ruling government, including regional minister Ama Benyiwa-Doe, also refused to recognize him while the President’s special aide Nii Lantey Vanderpuije (Nii Lantey) stopped Nana Addo on his way to greet the chiefs, claiming the “government was in charge of the festival” . https://www.modernghana.com/news/294951/nana-addo-was-too-short-his-entourage-reeked-of-alcohol.html

The Deputy Coordinator of the National Youth Council at the time, Prince Derrick Adjei (Adjei) said on a national television that Nana Addo may not have been acknowledged “because he was probably drowned in the crowd owing to his height and stature”

In 2012 when the New Patriotic Party (NPP) complained that the Ghana Television (GTV) didn't put their camera on Nana Addo at the funeral of the late President Professor Mills, National Democratic Congress’ (NDC) Central Regional Chairman, Bernard Allotey Jacobs (Allotey Jacobs) rubbished the accusations and suggested to the party to get someone to design pencil heeled shoes for their flagbearer to make him a bit taller. “As for me my suggestion is that they should look for a designer to design a pencil heel shoe for him. It can be a new design...” (Beatrice Adepa Frempong/Peacefmonline.com/Ghana 8/15/12)

During a 2016 political campaign in Koforidua by NDC, a short woman within the crowd had to be carried shoulder high to enable her view the proceedings. Paa Kwesi Bekoee Amissah-Arthur (Amissah-Arthur) (then vice-president) told the cheering crowd that short people should be carried in order for them to see the achievements of President Mahama in apparent reference to Nana Addo’s height.

https://www.modernghana.com/news/721729/short-people-need-to-be-carried-to-see-mahamas-achievement.html Earlier in August 2016 at the launch of the NDC presidential and parliamentary campaign in Cape Coast, Nii Lantey (then Minister of Youth and Sports) said the presidency was not for short people. https://www.modernghana.com/news/712505/who-do-npp-think-they-are-ill-keep-using-the-word-short.html

It looked strange that just for the sake of political expediency, people in responsible positions could sink so low as to lose their sense of reasoning to specifically set a section of the population they were supposed to be leading (short people represented by Nana Addo) aside for humiliation. This happened all because Nana Addo had expressed interest in the presidency. Interestingly, the 1992 constitution did not give categories of Ghanaians in terms of stature as to who should run for the presidency. Yet Amissah-Arthur and colleagues chose to make height an issue in the 2016 presidential campaign as if their political life depended on it.

The behavior of these four (Amissah-Arthur,Allotey Jacobs, Adjei and Nii Lantey) appeared to give the term cognitive myopias a new definition – that in their attempt to grow tall they left behind their deference capabilities for somebody like Nana Addo to pick them up as part of his growth in sagaciousness. Possibly they chose lunacy over rationality to explain why Nana Addo’s leadership of his party accounted for the landslide victory over his opponents, especially the NDC.

Teasing is part of life. Growing up in Ghana short people, like any other group, are subjected to their fair share of teasing – apalahala; akwatia ye mmobo, “aquit” shortee, dwarf, short man and many more. It rather becomes a problem when national leaders appropriate to themselves the power to insult citizens, throw decency to the wind and malign fellow human beings as if they do not matter. It becomes more disturbing when a vice-president of all people enmeshes himself in name calling of this nature of his political opponents.

Fortunately, God is not like Amissah-Arthur and his three tall men. He chose in His own way to allow Ghanaians to elect Nana Addo into the highest office in the land, the President of Ghana. What are these “tall wise men” going to do? Nana Addo has been lifted on the shoulders of Ghanaians for the whole world to see that a short man is our president. Would Nii Lantey continue to hold his position that the presidency is not for short men? Whichever way these NDC apparatchiks see themselves it is their own business. The fact remains that Nana Add is the President of Ghana.

On 7th January, 2017 a tall man handed over the presidency of Ghana to a short man - Nana Addo is the President of Ghana and nobody can change it!

Why go to the IMF when SSNIT can give you the money you need...
26 minutes ago

Northern Ghana is underdeveloped because of underinvestment ...
54 minutes ago