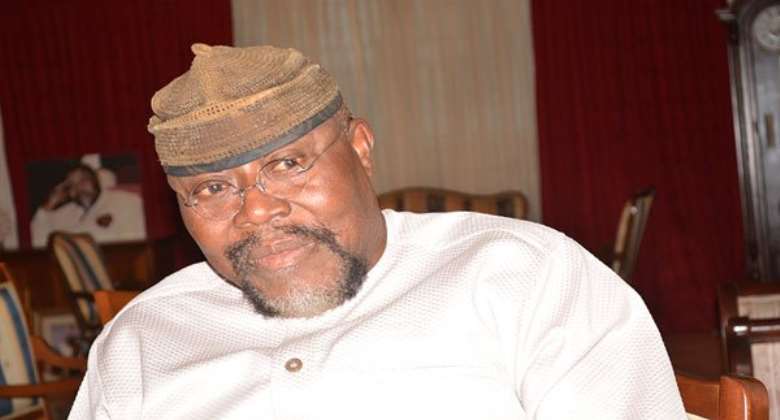 Hi Sir,
Let me congratulate you on your impressive accomplishment over the years. My first time of making an attempt to travel to United States of America revealed the household name “Nyaho” to me. The embassy referred me to the famous Nyaho clinic for medical examinations. I was very impressed about the health facility. However, I watched with stark horror and amazement, the video that pop-up in the run-up to 2016 presidential election in which you cautioned Ghanaians about a bitter lesson under Nana Addo Dankwa Akufu-Addo’s presidency. I still don’t doubt your integrity since there is no smoke without fire. Nevertheless, I think you impugned your hard won reputation by stooping so low.

Sir, my exposure to classical literature during my days at the University Of Cape Coast landed me on Sophocles’ famous drama Oedipus. An oracle is foretold that Oedipus will kill his own biological father and marry his own mother. Neither Oedipus’ father: Laius nor his own heroic accomplishment could avert the words of the gods. The final statement of Sophocles drama at Colonus depicted the tragic aspects of human life. “Cease now and never, more lift up these lamentations, for all this is determined.” The lamentation chapter 3 verse 37 of the Jewish and Christian Old Testament also states that “Who can speak and have it happen if the Lord has not decreed it?” In future, high profile personalities like you must control your tongue.

Sir, I think Ghanaians will rather learn a better lesson rather than a bitter lesson under the presidency of Nana Addo Dankwa Akufu-Addo. In the first place, a change is maximally essential when there is an intricate interplay of human experience. Human experience through the investigation of Lord Acton (1834-1902) revealed that “power tends to corrupt, and absolute power corrupts absolutely” Arrogance of power coupled with stage dancing from President John Mahama and his team infuriated many citizens. A change was inevitable. Ghanaians will learn a better lesson because Akufu-Addo’s presidency will thoroughly investigate the fraudulent judgement debt payment and thereby save the national treasury. I know the citizen vigilante, Mr. Martin Amidu will not spare President Akufu-Addo if fraudulent judgement debts are not retrieved for mother Ama Ghana.

Sir, I understood your frustration because only few people will stab their relatives at the back especially when they are closed to the presidency. You have to also agree with me that in spite of President John Mahama’s strides in the provision of infrastructure, his economic policies staggered Ghanaians under serious financial burdens. High import tariffs while Ghana could not boast of local factories was economically preposterous. What was more nauseating was that as Mahama’s government impounded fuel guzzling vehicles through importers’ inability to pay exorbitant duty and also on the grounds of saving fuel subsidy budget, the same government went about giving out V8 vehicles to his party stalwarts and aficionados. The scenario reminded me of the French colonial policy of assimilation on West Africa, when some people were regarded as citizens whereas others were subjected to “indignant and prestation” (force labor).

In his inaugural speech, President Akufu-Addo hinted on our constitution. This is an ample testimony that the president is in the known regarding the challenges of the nation. The appointment of the new speaker of parliament, Professor Aaron Mike Oquaye gives me hope. Professor, Oquaye is a political scientist, a lawyer, a pastor, a former parliamentarian, high commissioner and minister of state. As a pastor, I hope he and the members of parliament (MPs) will come out with a bill to halt religious capitalism in Ghana.

The famous German Philosopher and economist, Karl Max argued in his work: “A Contribution to the Critique of Hegel’s Philosophy of Rights” published in 1844, that religion is the opium of the masses. In the view of Max, capitalists on the icy waters of their own egoistic calculations, use religion to curb labor rebellion and injustices meted out by the bourgeoisie (capitalist class) to the proletariat (working-class). The working class are encouraged to eschew this materialistic world and prepare for eternal blissfulness in the life-here-after. The capitalist class on the other hand busily scramble for material benefits in this world through high proceeds from their companies.

The strongest critic of Karl Max was Max Weber. In 1905, Weber argued in his famous book entitled: “The protestant ethic and the spirit of capitalism” that message from the podium rather sparked-off industrial revolution. Workers were admonished against perpetual condemnation at the devil’s kingdom (Hell). They were encouraged to see their earthly work as a call to serve God. This kind of message led to the springing up of many industries which created Job for the masses.

How are these two divergent philosophies applicable to contemporary Ghana? As indicated in some of my previous articles, the works of early Christian missions were blessings to Ghanaians. “In Ghana, the monumental achievements of the Christian missions namely: the Basel mission (Presbyterian Church of Ghana), Wesleyan Mission (Methodist Church), Church of England’s Society for the Propagation of the Gospel (Anglican Church), the Bremen mission (Evangelical Presbyterian Church), Seventh day Adventist mission, Roman catholic mission (Catholic church) through the provision of schools and healthcare facilities which are distributed ubiquitously throughout the country deserve commendation. The contributions made by the Ahamadiyya Moslem mission through the provision of schools and hospitals must equally be praised. Kudos, our dear religious partners in development, but like the proverbial Oliver, we will always ask for more.

The backbone of Ghana’s economy had been cocoa. In 1911, Ghana became the leading producer of cocoa. Cocoa occupies second place on the list of Ghana’s foreign exchange earnings and constitute about 30% of all the export revenue representing about 57% of overall agricultural export. Cocoa was first introduced into Ghana by the Basel mission before, Tete Quarshie, who himself was a mission trained gold-smith, brought his “amelonado” cocoa pods into Ghana in 1879 from an Island of Fernando Po, modern Equatorial Guinea”. (Nana Yaw Osei: Rev. Professor Martey and the Nation building: Aluta Continua, September 6, 2016, modernghana.com). This means that good churches by appropriate men of GOD are integral part of national development.

However, the activities of the modern churches justify the claim by Karl Max. Pastors behave as if heaven is only meant for their followers. Men of God are now God of men. Their members are encouraged to eschew this materialistic world and follow Christ’s steps while they drive Range Rovers and other expensive cars as the evidence of God’s blessings in their lives. Their children are sent to schools overseas, they build for-profit universities and other businesses while their followers are encouraged not to be enslaved by their businesses and work at the expense of the kingdom of God. Their followers are inundated with prophesies at every December 31st. They have powers to heal by stepping on the womb of pregnant women. They never preached without Malachi 3:10. Their wives automatically receive divine calls from God to be pastors as the membership increases. They are placed on the payroll of the church. They must be remembered during the annual pastors’ appreciation day. Those who sing and play instruments are not paid. They must wait for eternal blessings and crowns in heaven. They are also directed to look up to politicians for employment. They must remember to pay tithe on every little gift they receive, albeit unemployment. Those who served the church diligently are denied medical help. They are instructed to fast and pray. Some die out of Ulcer in the process.

A poor farmer from Afram Plains who struggled to look after his daughter at Aburi Girls Senior High School up to University Of Ghana Medical School has no right to suggest a good husband for the daughter. The pastor has the power to impose a punctual member of his church who pays tithe regularly christened as “Committed Christian” to this innocent lady. Religion is indeed becoming opium of the masses in modern Ghana. It has been a capitalist venture rather than soul saving.

Your Excellency, ambassador Tamakloe, President Akufu-Addo’s choice of Professor Oquaye as the leader of the legislature means that Ghanaians will learn a better lesson rather than a bitter lesson. There will surely be legislation to compel religious capitalist to help their followers through job creation, provision of schools and hospitals because money meant for God is for his people. The traditional rulers also lord over their people by selling land resources indiscriminately. The proceeds from these resources could remove schools under trees, but they count on the central government for such services. Hmm! As the French philosopher, Denis Diderot (1713-1784) opined “man will never be free until the last king is strangled with the entrails (intestines) of the last priest.”

World Bank data in 2015, claim that 45.96% of Ghanaians live in the rural areas. Apart from this, almost half of the urban dwellers live in abject poverty. For example, In October 12, 2005 “The board of directors of the African Development Fund (ADF) approved a loan of 25 million Units of Account* (US$ 36 million or 330 billion Cedi) to finance the Urban Poverty Reduction Project in Ghana. The project aims at contributing to Ghana’s efforts to achieving the Millennium Development Goal that calls for a reduction by half of the proportion of poor living on less than a dollar a day through urban poverty reduction strategies.” (Source, African Development Bank, Tunis). This happened in 2005, when the economy was stronger than now per available data.

The data above attest to the fact that many people do not pay tax, albeit many demands on Ghana government. Some portions of the little tax revenue especially from the port are diverted into individual accounts, thereby presenting a huge fiscal deficit for the government. Between 35 and 40% of the national budget is supported by the donor countries which rarely comes. We also do not determine the prices of our commodities at the international market. A fall of the price of cocoa, or gold at the capitalist greed markets has a rippling effect on the economy. Government needs to pay teachers, nurses, doctors, police, soldiers, civil servants and other related workers. President J. A Kufour quickly developed grey hair, social pressure on the late President Mills deteriorated his health. President Mahama developed grey hair quickly. President Akufu-Addo and the Vice president, Dr. Bawumia will definitely feel the pressure. Based on the aforesaid challenges, a competent economic team must be indispensable to create enabling environment for private sector participation. I think Mr. Akufu Addo and his New Patriotic Party (NPP) team will present a better economic alternative policies to resuscitate the sinking economy.

Dear sir, I am convinced President Akufu-Addo will do well. The team he is presenting is almost similar to that of president Kufour of which you were part. Names like Mr. Albert Kan Dapaah, Professor Frimpong-Boateng and Professor Mike Oquaye had already taught Ghanaians a better lesson rather than a bitter lesson as you predicted. These were the same people who pulled Ghana out of IMF in the past. By this letter, I am appealing to you to publicly apologize to your heretofore party member, President Akufu Addo. It is my fervent wish that this letter coupled with Nana Addo’s resounding victory in last year’s election will goad you to be remorseful of your actions. God bless you! God bless our homeland Ghana.