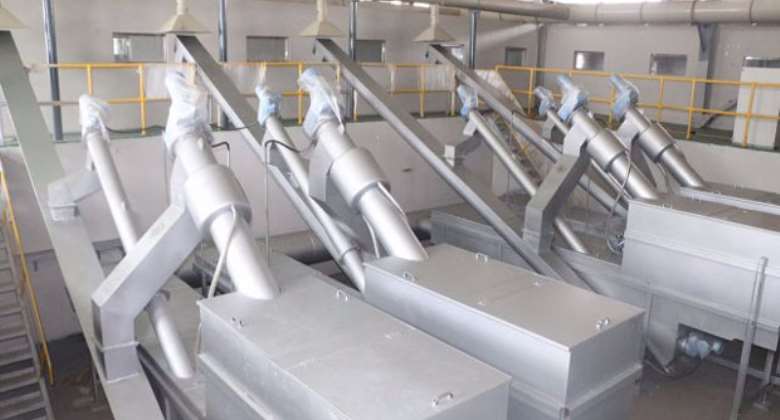 The Jospong/Zoomlion Group of Companies has finally ended the old practice of discharging raw sewage into the sea at Korle Gonno, a suburb of Accra, with the commissioning of the new Lavender Hill Faecal Treatment Plant and the rehabilitated Mudor Treatment Plant.

The construction of the new Lavender Hill project, located at Mudor, an arm's stretch from the old Lavender Hill, began on September 9, 2014.

DAILY GUIDE gathered that cow dung will be used to charge the system.

Also, the plant comprises a modern laboratory which will test both the influent and the effluent qualities of the waste water.

The final effluent will meet the EPA standards and will also be pumped back into the system for reuse in the plant.

Unlike the old Lavender Hill which took about 300 trucks of raw sewage vehicles a day, the new Lavender Hill, which is to take in 200 waste trucks per day, is believed to be environmentally sustainable, and accordingly meets both local and international standards.

The ultimate objective of the new treatment plant is to give Ghanaians a more decent and environmentally acceptable standard facility.

Biological Process Start-Up Time is between a maximum of 90 days.

“The project (new Lavender Hill) is one of its kind in the sub-region,” the president said, adding that our aim is to replicate it in other regions of the country.

The president explained that the 'old Lavender Hill' caused the country a great deal of embarrassment on the international scene, making foreigners to tag Ghana as one of the dirty nations of the world.

He said the old project has been closed down forever, adding, “We are putting the past permanently behind us and never to return to it again.”

The old project reportedly cause many health issues among residents of Korle Gonno for many years, resulting in several litigations between the Accra Metropolitan Assembly (AMA) and the Environmental Protection Agency (EPA).

President Mahama said the plant would serve communities such as Osu, Labone, Accra Central Business District and the Ministries.

Prior to the rehabilitation works on the plant, the contents of the sewer system were pumped out into the sea via an outfall pipe.

As a result of the expansion of the sewer network under the Accra Sewerage Improvement Project, Sewerage Systems Ghana Limited has expanded the capacity of the plant from 16,000 cu.m/ day to 18,000 cu.m/day.

Biogas, which comprises methane, carbon dioxide and hydrogen sulphide, would be extracted from the UASB treatment process, after which it would be cleaned for methane to generate electricity mainly to run the plant.

The gas accordingly will be cleaned in the three off-white desulphurization tanks and the expected volume of gas to be generated is about 7,000 cubic meters which is expected to produce between 400kw to 500kw of electricity.

Meanwhile, the Adjen Kotoku Septage treatment which started in 2012 at a cost of $15 million has been commissioned.