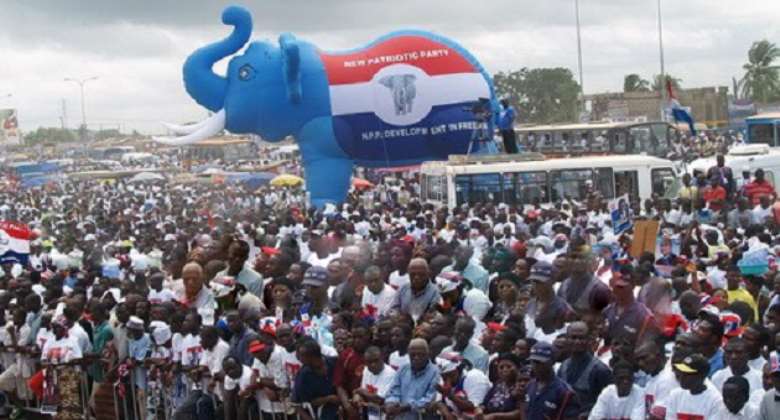 _Anonymous (political analyst) _
Ghana has witnessed a stable and consolidating democracy since 1992 as it remains the beacon of democratic freedom and political excellence. As a matter of fact, the constitution makes provision for the interplay of several political parties to compete for political power, since political parties are major and necessary elements that help shape the whole process of democracy and thus democracy is unthinkable save in terms of political parties.

But the Ghanaian political landscape and successive developments indicate a manifestation of only two defacto political parties who have dominated the political space and have thus alternated power within 1992 and 2012. Issues about governance are quite delicate since dimensions of developments and massive paradigm shifts depend on a workable government who makes sure that the interest of the people who put him there due to electoral mandate is remained the ultimate factor in the process of delivery.

The NDC under Jerry John Rawlings enjoyed a two term leadership from 1992-2000. After the 2000 election in Ghana there was a change of government which saw to the emergence of the NPP under J.A Kuffour who took the political mandate and demonstrated an effective and efficient development and thus minted the meaning and the rationale behind the formation of a government democratically. The NPP took over power and inherited an economy that was broken and left in shambles.

The strength of the elephant was indeed manifested in shaping the economy in its right form. The NPP which a right in ideological outlook did not held rigidly onto its philosophical underpinnings and inclinations but resorted to the hearing of the woes of the masses and delivered massively which helped lift Ghanaians out of their miseries.

With high inflation, high unemployment rate, cash and carry systems which affected the poor, and several unpleasantness. With the excellent posture by kuffour and the NPP government the economy was fixed which to a significant effect helped renew its mandate in 2004. For proper analysis on the kuffour administration and how it fixed the economy with indispensable policies( see myjoyonline August 28,2009, kuffours legacy of development second to none).for better prognosis and diagnoses of the remarkable posture of the kuffour administration of the NPP (see the chronicle April 4,2012,which postulates the achievements of president kuffour being catalogued in international magazine)

Matters of relevance and critical reflections: “behold change is nigh”

The elephant was chased into the bush without a good intent. The umbrella jumped in to demonstrate its posture of covering the country in the direction of good governance against the supposedly “worst governance” by the NPP in 2008. Sadly H. E John Evans Mills passed on (may his soul rest in peace).Due to this the vice president was to be sworn in to take charge.

On the 7 day of December, Ghanaians went to the polls. Doubted with strong evidence from the court proceedings which was broadcast in the country in 2013, the victory of the NDC was questionable. The elephant was blocked with thorns and sharp spears of irregularities and electoral frauds which turned the face of the elections in to the favour of the NDC.

To recollect sharply, the 1992 general elections was also characterized by massive irregularities which was codified in the NPPs stolen verdict. But surprisingly anytime the elephant is blocked and thus not allowed to gain prominence, the government which obtains the political green card in the case of the NDC with doubts subject the country to deterioration and ill management. Due to long standings of incompetence and economic dysfunctioning a way is paved for a liberating elephant which brings down all the irrelevant trees of mismanagement and restore hope in the heart of the ordinary Ghanaian.

The Mahama led NDC administration since 2012 has demonstrated an abysmal performance as far as proper governance is concerned. The mal functioning of the nature of the NDC government has resulted in massive effect negatively in the lives of ordinary Ghanaian. Inflation rates are high, issues of corruption and massive irregularities. The GYEEDA and the SADA issues are quite sad and pathetic if a thorough mapping is made to look into the whole nature of this establishments.

Selling our sovereignty to the IMF, the interest of the ordinary Ghanaian is thrown under a running vehicle. It’s quite disheartening as the NDC is aware of the implications of the begging approach while we relinquish our sovereignty. Ghana’s romance with the IMF is at the expense of the poor in the country, where there is high unemployment rate, laying off workers, retrenchment, cutting down government expenditure which is not necessary due to government deliberate oversight of irregularities. Most importantly the national health insurance scheme which provided free healthcare to the poor has been damaged base on relinquishing our sovereignty and receiving directive s from a foreign actor. The NDCs begging bowl is leaking as aids that comes to the country are shared among cronies and party associates.

In a close interview with an NDC activists from Asawase(sub metro of the Kumasi metropolis), he opined bitterly that” during the good standings of the National health insurance scheme(NHIS), his brother in law was under surgical operation for two months and all they spent was GHC 2.” He demonstrated the bitterness and frustration the NDC government had brought on Ghanaians .withdrawing the allowances enjoyed by nurses and teacher trainees. Sale of government institutions and corporations all under the directives of the IMF. The implications of the romancing with IMF is quite huge but the NDC with a blind eye and a deliberate posture still sings to the tune of this foreign actor. The power outages Ghanaians have witnessed for some time now leave much to be desired.

The dawn of liberation: “the elephant cometh”

The elephant has been very tolerant and much observant with all the wrong directions of the Mahama led NDC administration. History will surely repeat itself as in 2000 when the economy was in shambles and at the edge of explosion by the same NDC government and thus with the tunes of Cindy Thompson’s “AWURADE KASA , the elephant came and brought down all the trees without fruit and engaged in development afforestation which strengthened the pillars of the country.

To conclude, in the words of the late president John Evans Attah Mills he states:

This quote explains that when you analyze your state of existence under a government (an incompetent one) and its not progressive change is the only alternative approach and solution.

The elephant has observed the incompetence of the Mahama led NDC administration for some years now. The elephant is angry and will surely return and will not and can never be chased into the bush again.

Change is coming and it’s near.