The Bleaching Palaver: Ghanaians And The Color-Line 2 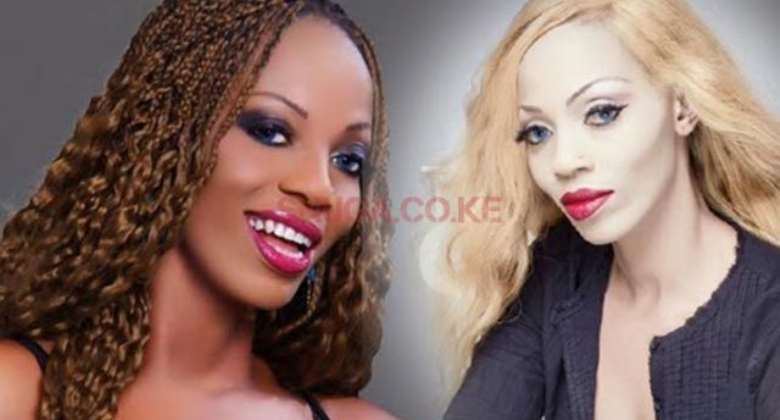 The plague of skin bleaching in Africa

And, of course, Du Bois may not have been the original author of “the color-line” phrase but his other diagnostic phrasal coinage, “double consciousness,” certainly speaks to the psychological scars in the African humanity that Susan so passionately talks about.

We all saw the public outcry against actress Yvonne Nelson’s sudden light complexion.

Many women have claimed using chemicals to deal with wide-raging problems including but not limited to, acne, melasma, pimples, and rosacea.

This pathology of inferiority complex, to borrow this Fanonesque phraseology, is so entrenched in the body politic of the African collective mindset as to make practical sense (see Frantz Fanon’s “Black Skin, White Masks”; see also Albert Memmi’s “The Colonizer and the Colonized”).

We even see bleaching both as a metaphor, namely, bleaching of the African mind thereby leading to easy internalization of inferiority and dependency complexes, and as a literal language of legal practice and jurisprudence (see Bruce Wright’s book “Black Robes, White Justice”).

Skin-bleaching is an endemic problem we have to put the kibosh on across Africa.

In Ghana, Nigeria, and across Africa for instance, persons with a light-skinned complexion are more favored for movie roles contrary to any consideration of whether they have the talent for the assigned roles.

Furthermore, those who have themselves complained so bitterly of having been slighted in the entertainment industry on account of their dark-skinned complexion, like Mercy Johnson, have been accused of skin-bleaching!

Here is Mutabaruka on “Whiteman Country”:

“Emancipate yourselves from mental slavery; none but ourselves can free our minds,” went the soulful voice of Bob Marley in the wilderness of conscious lyricism.

Frantz Fanon once told this great story (we are retelling the story with own twist on it):

God created three races of men—The White Man (Europeans), the Yellow Man (Asians) and the Black Man (Africans)—and put them on the planet Earth, with one condition to satisfy as a requirement for entering Heaven or Hell:

“To use their individual intellectual gifts to advance themselves and humanity in general.”

Standing before God on the Judgment Day—the first day of reckoning—the White Man said he discovered theories, cured diseases, traveled to space, proved that God did not exist, and so on. “Heaven is all yours, go!” said God.

On the second day the Yellow Man said confidently that he improved upon the theories the White Man discovered, had plans in place to explore space, and so forth. “Heaven is all yours, go!” repeated God.

On the third day—the last day of course—God asked the Black Man: “What did you do for yourself and for humanity as a whole? And why are you here?”

The Black Man: “I always carried the luggage of my brothers and sisters—the White Man and the Yellow Man—wherever they went. Here, you see, even today I still have to accompany them to this beautiful place carrying their luggage.”

“For several years, some laboratories have been trying to discover a serum for ‘denegrification’; these laboratories, with all the seriousness in the world, have rinsed their test tubes, checked their scales, and began research that might make it possible for the miserable Negroes to whiten themselves and thus throw off the burden of that corporal malediction” (Frantz Fanon)

Today, far from the endarkened yesterday of the Fanon era, these “laboratories” have come to represent a dangerous metaphor for the pathologizing of inferiority complex in the African mind.

Bleaching the African skin is not only a moral statement on the dermatological betrayal of African humanity per se, but that it is also a poignant indictment of the African Personality.

It is a betrayal of everything that Nkrumah fought for (see Chapters 1 and 4 of Jemima Pierre’s book for more information).

Bleaching is more than a disease of the mind. It is simply madness of the soul, an erosion of human spirituality!

It did not come to us as a major surprise then when some Ghanaians came up with the idea to create a laboratory to store “white sperm.”

The idea was to sell this “white sperm” to those Ghanaian women who wanted to have biracial children. One wonders what became of this idea!

Today, we have created our own color-line and with it a renewed Du Boisian double consciousness of inferiority complex.

It is like Jacobus Capitein (1717-1747) all over again, defending slavery in line with Christianity. The slave mentality is an icky empire of self-debasement, of inferiority complex. In the end though, we may have to stop blaming the West and start taking responsibility for our actions.

CONCLUSION
Not even the eliminativist philosopher Kwame Anthony Appiah believes the concept of “race” is entirely of no consequence in understanding modern society and race relations. He reluctantly accepts the social value of “race.”

Rather, racial fixation is what he strongly opposes both on philosophical and scientific grounds. It explains why he proposes “cosmopolitanism” in the stead of racial fixation. Regardless, no one who truly loves him/herself will bleach the skin at the point s/he comes into contact with the ennobling conscience of the self. No doubt bleaching translates into outright denial of the self.

“Yes, we’re one and the same…
“And I told them about equality; and it’s true…

“I’m not going to spend my life being a color