It's 'Dallas' in Gabon as country awaits key vote ruling 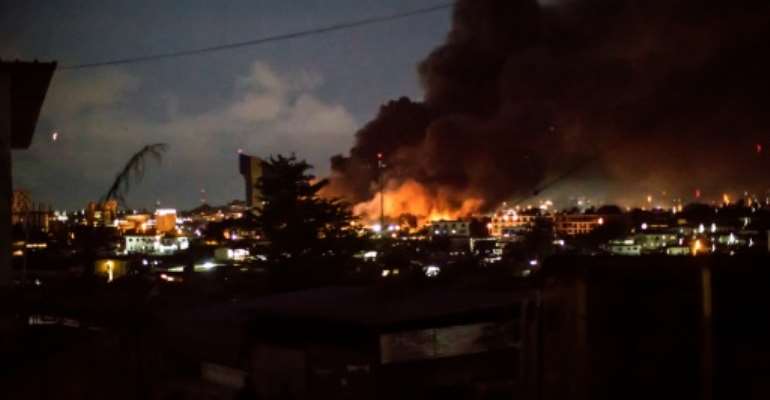 Smoke and flames are pictured from the National Assembly building following the August 31 announcement that Bongo had been re-elected by fewer than 6,000 votes. By Marco Longari (AFP/File)

Libreville (AFP) - The head of Gabon's top court, which has the pivotal task of ruling if President Ali Bongo's contested re-election is valid, is a former beauty queen whose affair with the leader's father produced two children.

Marie-Madeleine Mborantsuo is in the limelight in this oil-rich Central African nation where Bongo's victory is being challenged by his former brother-in-law, veteran diplomat Jean Ping.

"Here it's Dallas," the American ambassador Cynthia Akuetteh said, according to French media reports, referring to a wildly popular US television soap opera revolving around a filthy rich and feuding Texan oil family.

For over 20 years the glamorous 61-year-old has headed the nine-member Constitutional Court, dubbed the "Leaning Tower of Pisa" by the opposition for allegedly kowtowing to the Bongo regime.

But she is just one character in the tightly interlaced cast that makes up Gabon's political elite.

Ping held a succession of prestigious posts and was one of the longest-serving ministers of late president Omar Bongo, father of the current President Ali Bongo.

But upon Omar Bongo's death in 2009, Ping turned against Ali Bongo, who had stepped into the presidency.

The half-Chinese Paris-educated Ping had two children with Bongo's eldest daughter, but later wed an Ivorian.

Ping last week took his challenge of the result of the August 27 polls to Gabon's top court.

After riots broke out following the August 31 announcement that Bongo had been re-elected by fewer than 6,000 votes, he in turn claimed Ping had encouraged the violence.

Ping has asked for a recount in the ruling family's stronghold of Haut-Ogooue province, where Bongo won more than 95 percent of votes on a reported turnout of more than 99 percent.

Ping's supporters say that 17 people were killed at his party headquarters alone in a wave of post-electoral violence, but the interior ministry says the toll is three dead.

'Peace in her hands'

Gabonese President Ali Bongo Ondimba arrives to cast his vote at a polling station during the presidential election, which he won by fewer than 6,000 votes

The Bongo family has ruled the tiny nation with an iron fist since 1967.

Mborantsuo, a former beauty queen from the Bongo stronghold of Haut-Ogooue, caught Omar Bongo's attention and was named to the Supreme Court when she was aged only 28.

She had an affair with him and bore him two children.

According to the opposition and the Gabonese media, she has amassed a formidable real estate portfolio at home and abroad.

"Nobody want to be in Mborantsuo's shoes," said a diplomatic source. "She is under enormous pressure from both camps."

Three of the judges are named by the president, three by the Senate and three by the former assembly president Guy Nzouba Ndama, who since the start of this year became a Ping supporter.

France, Gabon's former colonial ruler, has called for a fair ruling with Foreign Minister Jean-Marc Ayrault underscoring the need "to examine the objections transparently and impartially."

Supporters of the Gabonese opposition leader Jean Ping, dressed in white and with hands painted in white as a sign of peace, take part in a tribute ceremony after President Ali Bongo accused opposition of inciting violent riots on August 31, 2016

Opposition supporters say they will not allow Mborantsuo to uphold Bongo's victory.

"We will not let her do it," one said. "The only option is that Ali quits."

Ping has already warned that a "false step" by the Constitutional Court would cause deep and long lasting instability in Gabon.

Police smoke out Shatta Wale, handcuff him for faking gun at...
44 minutes ago