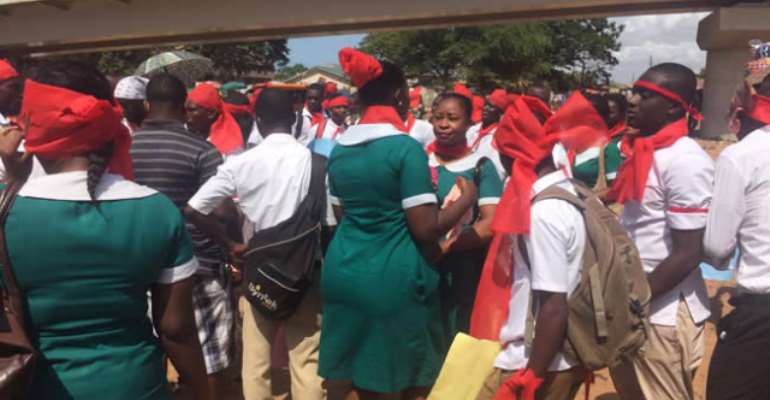 Charles Darwin once remarked, "It is not the strongest of the species that survive, nor the most intelligent, but the one most responsive to change"

Darwin, by this quote, sees change as a necessary tool for human existence and survival. Yet, change is like bitter truth, it always faces stiff opposition from the throat. But when endured and swallowed, it does more magic to the body by giving it good shape and health. And talking about health brings to mind, the issue of nursing trainees and the restoration of their scrapped allowances.

Flashback to March 2013, a time when Ghanaians were battling severe energy crisis, and a time when the cedi had lost her pride to the dollar, news of President Mahama and the NDC's decision to scrap nursing trainees allowance from the system hit the electronic and print media. This was met with bitter reactions and criticisms from a large section of the public, with some affected nursing trainees describing the move as preposterous, unwarranted and miscalculated. The Public Relations Officer of the Ministry of Health, Doctor Tony Godwin, frowned on the decision by opining that "those allowances help to motivate and retain nurses in the country". The demonstrations, as usual, were not left out.

However, after borrowing consolation from Charles Darwin's quote above, and considering the silver-tongued explanations offered by government, opponents of the move were forced to reconsider their thoughts as they were made to believe this was one of the harsh changes that would ultimately activate and propel positive changes. In an interview with Ghana News Agency on 7th March, 2013, Doctor Nuertey, the Volta Regional Director of Ghana Health Services, argued that "the country needed money to equip health facilities and could not continue giving allowances to students". He further argued that "the Ministry of Health was spending between eighty-five and ninety percent on personnel emoluments and that the call for scrapping the allowance was right.".

The Eastern Regional Minister, Ms Mavis Frimpong, welcomed the move by arguing that it "was to remove restrictions on admissions to the various training institutions due to the huge amount government had to pay in the form of allowance."

The KNUST wing of the NDC from the Tein Constituency, in an article published by Modernghana, put up a mouthwatering argument in favour of the move. In this article, it was succinctly stated, among other points that, the scrapped allowances would help "expand the existing midwifery and nurses training colleges and establish new colleges in under-served areas". They added that, this would also "augment the President and government appointees 'pay-cut' policy to build more CHPS compounds in remote areas in pursuance of the Better Ghana Agenda. The article was concluded with a rather interesting remark, "We are wary of obvious Better Ghana Agenda disparagers who would characteristically call a bluff of the new development to achieve cheap, weird and political gimmick". We will also not forget the arguments that were advanced by Doctor John Koku-Awoonor Williams, The Upper East Regional Director of Health, and Professor Agyemang Korsah, a Clinical Pathologist.

For more than three years, these highly-displeased nursing trainees have been left with the Hobson's choice of staying mute as they are denied their allowances. Interestingly, barely five months to election 2016, President Mahama and the NDC have 'beaten retreat' by constituting a 'technical committee' to look into bringing back the scrapped allowance.

I have no time to go into the number of existing midwifery facilities that have been expanded. Neither do I have time to go into the number of CHPS compounds that have been built in remote areas since the scraping policy took off. But I ask: Are the NDC now turning into disparagers of their own policy? Why the decision to reverse the scrapping policy at this time? Isn't that an attempt to score cheap and weird political point? What thinking went into the thinking that birthed and backed this policy? Did the thinkers fail to think? I will pause here and invite answers from my NDC brothers and sisters.