The Thoughts of Man. KITIKATA, As is the Microcosm, so is the Macrocosm 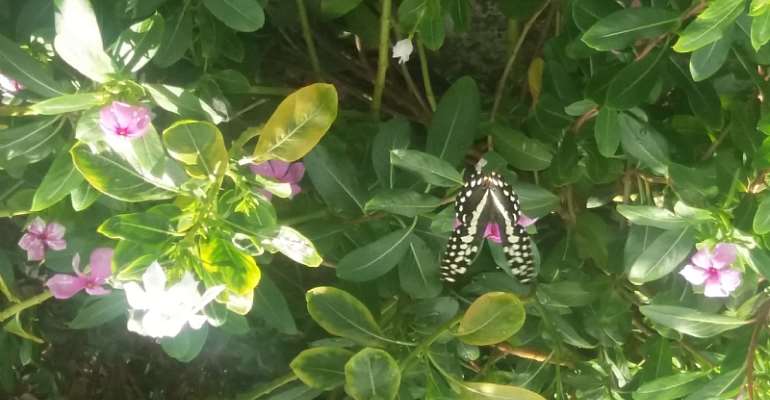 I was watching the beautiful butterflies busily cross pollinating under the morning sun. As I observed with intensity, I was again caught up in a conversation with the earth. The tiny butterflies’ survival and productivity on planet earth is dependent on how the larger environment is kept in its natural shape and form. The earth took me on a mind tour of clarification.

SOGBOLISA= the one who is the embodiment of Sogbo (male, masculine) and Lisa (female, feminine) spirits

AMESI WƆ DZIƑO KPLE ANYIGBA= the one who created heavens and the earth or, the one who out of the formless heavens created the earth

AƉAŊTƆ BE YƐ WƆ ASI KPLE AFƆ= the owner of all wisdoms or THE WISE ONE who created the hand (ASI) and the leg (AFƆ), in other words, the one who created Man.

These attributes clearly demonstrates how YHVH of HIMSELF, spiritually and scientifically caused every creation to be a manifestation of HIM.

SOGBOLISA The balance and reproduction of the earth is a constant interaction of SOGBO (Male, masculine, positive) and LISA (female, feminine, negative) spirits or energies. For example, a man (masculine) cannot reproduce of himself unless there is an interaction with the feminine. Science (Physiscs) has proven beyond doubt that, a universe in which positive energy dominates will eventually collapse, while a universe in which negative energy dominates will either expand indefinitely or eventually disintegrate. In the zero-energy universe model, the total amount of energy in the universe is exactly zero which means, its amount of positive energy in the form of matter is exactly canceled out by its negative energy in the form of gravity . The survival of the earth is in its energy being in equilibrium.

KITIKATA According Pierre A. Riffard , Dictionnaire de l’ésotérisme, Paris: Payot, 1983, 34, Macrocosm and microcosm is a vision of cosmos where the part Kiti (microcosm) reflects the whole Kata (macrocosm) and vice versa. According to scholars, this knowledge is present in all esoteric schools of thinking. It underlies practices such as astrology , alchemy and sacred geometry . Is this different from YHVH’s (GOD) position of the universe which HE has created? A look at Genesis reveals something more interesting.

Genesis 2:7 And the LORD God formed man [of] the dust of the ground, and breathed into his nostrils the breath of life; and man became a living soul.

From the above, it can be deduced that man is a kiti (microcosm) of the earth, kata (macrocosm). This is also scientifically proven. Remember, the Bible says, YHVH (GOD) formed man [of] the DUST OF THE GROUND, not formed man out of the earth.

Now the Earth-forming elements which are crust, mantle and core is governed by geological definition. This definition does not take into consideration the composition of the atmosphere, the hydrosphere (the Earth's water systems) or the biosphere (the Earth's living systems). So therefore, should any other Bible states that man was formed from the earth, or man is a kiti (microcosm) of geological earth, it may lead to confusion as the elements of earth which are geologically named as crust, mantle, and core may not be found directly in man. These Earth systems must be considered separately in regard to their elemental composition.

According to biophysiological which include, the biosphere is the global ecological system integrating all living beings and their relationships, it includes their interaction with the elements of the lithosphere, geosphere, hydrosphere, and atmosphere. The biosphere is stated to have evolved, beginning with a process ofbiopoesis (life created naturally from non-living matter, such as simple organic compounds) or biogenesis (life created from living matter),

The human body is made up of materials and minerals found on the surface of the ground (the DUST OF THE GROUND), and not from the core of the earth. For example, Oxygen, being the most abundant element on the earth’s crust or on the ground, makes up 65% of the human body, carbon, a surface material of the ground, constitutes 18%, hydrogen 10%, Nitrogen 3%. The percentage total of oxygen, carbon, hydrogen and nitrogen is 96%. The other 55 materials or elements include phosphorous, chlorine, sodium, magnesium etc which constitute the remainder 4% are all found on the surface or crust of the earth. It can therefore be posited that MAWUGA, YHVH formed man from the surface of the earth, kata (macrocosm,). Hence, in Genesis 3:19, it is stated by YHVH “…… for out of it wast thou taken: for dust thou art, and unto dust shalt thou return.”

Genesis 2:7 further states that YHVH breathed into his nostrils the breath (spirit) of life. The spirit or breath of man is a KITI, (microcosm) of a KATA, (MACROCOSM, GOD). Genesis 1:27 So GOD created man in his own image, in the image of God created he him; male (Sogbo) and female (Lisa) created he them.

Furthermore, science has proved that, the adult human body averages 53% water. This varies substantially by age, sex, and adiposity (fat). In adults of all ages and both sexes, the figure for water fraction by weight was found to be 48 ±6% for females, and 58 ±8% water for males. Water is 11% hydrogen by mass but 67% hydrogen by atomic percent, and these numbers along with the complementary percentage numbers for oxygen in water, are the largest contributors to overall mass and atomic composition figures. Because of water content, the human body contains more oxygen by mass than any other element, but more hydrogen by atom-fraction than any element. Juxtaposing this to the biosphere, we are all taught in basic geography that, the earth is made up of 65-70% water than any other materials. Is that nor same composition of man?

The question therefore is, why a simple observation of beautiful butterflies should cause the earth to engage unscientific mind of mine to all these spiritual and scientific revelations and facts?

It is simple. As we continue to cause so much damage to the earth environment (macrocosm) with destructive pesticides, Genetically Modified Organisms, dangerous emissions to the atmospheric space, rampant disposal of non-bio degradable materials into the soil, polluting of the water bodies with poisonous mercury and other dangerous chemicals, reckless oil explorations, and cancerous pharmaceuticals, the earth environment which is the Kata (macrocosm) of which man, Kiti (microcosm) was formed, has become diseased, sick, and inefficiently functional. So also is man plagued with so much diseases and sicknesses that the earth has never experienced. As the kata (macrocosm) becomes more diseased and sick due to reckless human behaviours, so shall kiti (microcosm) be plagued with more diseases and sicknesses.

The result of this reckless damage to the earth environment, kata (macrocosm) is enormous which has negatively impacted man, kiti (microcosm) and his ability to function at the optimum. The following diseases among others have been on the increase since man decided to pursue reckless and wanton destruction of the earth environment; cancer and skin cancer, and allergic skin irritations, cataracts, poor vision and blindness, memory loss and brain damages, early menopause in women, onset of early sexual weakness in men, DNA damages, increase extinction of aquatic plants and animals, increased drought, hunger and malnutrition, heat wave as a result of increased global warming and climate dislocations.

The fact of the matter is that, these dangerous occurrences are reversible. It will not take less than 20 to over hundred years to see changes if we collectively act now by loving the earth. How can we say we love GOD yet destroy HIS creations? That is a dysfunctional love. Let us begin to reverse the destruction of earth environment in so doing, we are reversing the destruction we are visiting on ourselves.

KITIKATA, as is the microcosm, so is the macrocosm

The AƉAŊTƆ, the owner of all wisdoms or THE WISE ONE, is wise. Shalom.

Written by Kofi B. KUKUBOR