The Bead Culture Among The Krobos Of Ghana 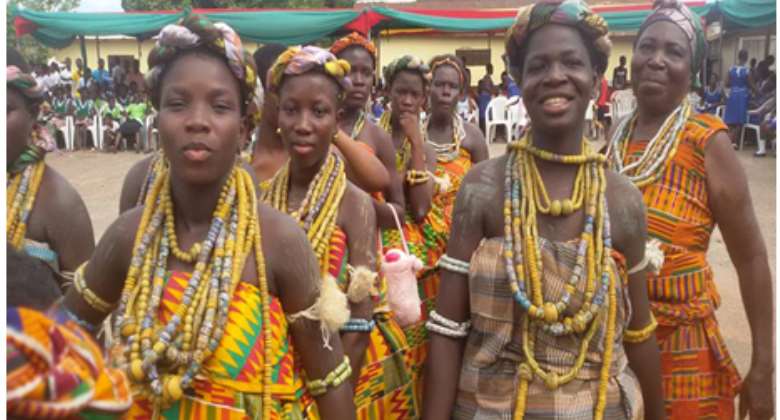 The Krobos of south eastern Ghana are among the oldest and most famous makers and users of beads in the world. Beads are small pieced or perforated objects that may be strung into necklaces and bracelets or attached to clothes. Just as gold is associated to the Ashanti, bead is to the Krobo. Across Krobo towns and villages such as Odumase Krobo, Agomanya, Somanya, Akuse, Kpong, Asesewa, Sekesua among others, the use of beads is rather a ubiquitous phenomenon than an occasional one. It is a way of life and its use is just like the palm oil with which yams are eaten.

In all aspects of the life of the Krobo, the bead is almost indispensable; it is seen in our social, economic, cultural, religious, as well as political life. In all our rites of passage, the bead is used; - in pregnancy, birth, puberty, marriage and death. Similarly, in many other rites including the installation of chiefs/kings, queens and priests the bead is used. In short, beads give meaning to the life of the Krobo and though its usage is now common among other tribes in Ghana and the world at large, the value and significance of Krobo beads is unquestionable and unmatched.

Oral traditions suggest that the use of beads among the Krobo dates back to the 9th Century AD. Throughout the days of the Krobo (Dangme) migration from North-East Africa, the region known today as Israel, through to Ile-Ife on Yuroba land in Nigeria to their arrival around the 14th Century in the then Gold Coast, now Ghana, the Krobo have used and attached much importance to beads. Just like the ancient civilizations of Egypt and Mesopotamia, the pre and post-modern Krobo society have manufactured, traded and used beads.

In the earlier days, it was mostly associated with money and magic. Today, the usage of beads varies from issues of love, charm, fertility, protection and also as fashion and a symbol of wealth. History has it that, the early beads were either unearthed from caves and or were made from grooved animal teeth and bones and were rather worn around the knees and the waist. With time, it was also worn around the neck, wrist or as bracelets and earring.

Today, the Krobo bead culture has become a national one. It is common to see people from all parts of the country producing and using beads (powdered-glass, bamboo, plastic) but when it comes to quality and value, they are unmatched to Krobo beads. The Krobo bead makers are best known for their wonderfully made colourfully powdered glass beads made from recycled glass and produced using traditional, labour-intensive methods.

So whether you are an international tourist visiting Ghana or a Ghanaian who love beads, just make a trip to Odumase Krobo or Somanya and get yourself some beads such as Kɔli, zagba, otaka, powa, Lɛɛ, Kpɛɛ, kofoya, mɛtɛ among others. Opportunities abound for the Krobo bead industry. It offers the Krobo area a unique opportunity for growth and development.

The first international bead festival was held in Odumase-Krobo but one cannot tell what has become of it. I therefore call on our traditional authorities, heritage groups such as Kloma Hengme, the municipal and district assemblies as well as the ministry of Tourism, Culture and Creative Arts and the Dangme Newspaper to liaise and find ways of tapping from this huge potential beads offers Kroboland and Ghana. God bless Krobo-land and its people, God bless Ga-Dangme, God bless Ghana.