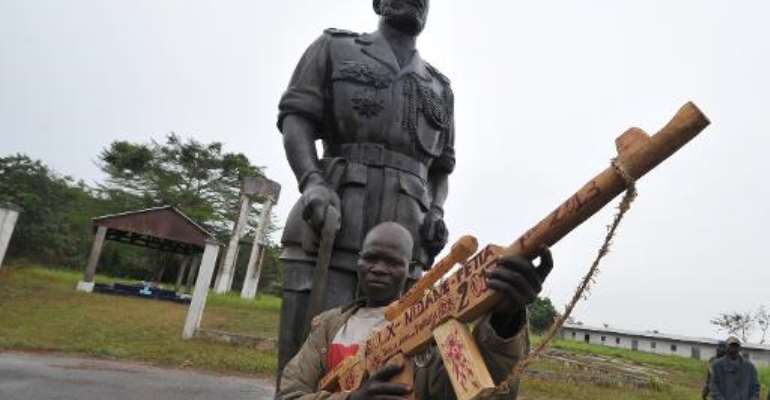 A former member of the Seleka rebel group poses with his wooden weapon next to a statue of the former Central African Republic Jean-Bedel Bokassa in Beringo, on March 3, 2014. By Sia Kambou (AFP)

"We're gritting our teeth and hoping for the best," says Patrick Betty Singa, who was part of the mainly Muslim Seleka rebel coalition that overthrew president Francois Bozize in March 2013.

The rebels installed their leader Michel Djotodia in power, but 10 months later Djotodia was forced to step aside for failing to quell sectarian violence.

For nearly two years now, Patrick and about 100 comrades have been living among the royal ruins at Berengo, about 50 kilometres (30 miles) south of the capital Bangui.

Their imperial squat consists of several low-slung buildings, where Bokassa, who ruled from 1976 to 1979, set up court, near his birthplace.

After his ouster in a coup, looters systematically went through the complex, stripping it of everything useful, down to the wiring.

The fighters holed up in Berengo have little more than the shirts on their backs. Patrick's hand-me-down top bears the image of Bozize -- the president he helped topple.

"I joined the Seleka during the offensive. I fought and took part in the capture of Bangui," he says proudly, going on to reel off the towns where his comrades joined the rebels on their march to the capital.

The worst conflict to convulse the notoriously restive country in decades took on an unprecedented sectarian dimension after rogue rebels began to rob, rape and massacre civilians.

The atrocities sparked fierce reprisal attacks against Muslim communities by militia from the Christian majority.

At the height of the violence early last year, more than 930,000 people out of a population of some 4.7 million had fled their homes, according to the United Nations.

During their short stay in power, the Seleka recruited men hand over fist towards a new army. In April 2013 alone, they enlisted more than 1,300 newcomers.

"We're hiring these youths to prevent (them from becoming) bandits and thieves. But unlike the regime of François Bozize, we take in everyone, whatever their ethnic group or religion," Colonel Oumar Bordas told AFP at the time.

While most ex-Seleka members are Muslim, Patrick and his comrades in Berengo are Christians.

They say the interim government installed after Djotodia quit in January 2014 promised to incorporate them into the national army.

But as the days and weeks go by, they feel forgotten by those in power, despite official pledges of disarmament, demobilisation and reinsertion.

Some armed groups have agreed in principle to a process that would provide fighters with the basic means to survive if they do not join the army.

At a reconciliation forum in Bangui last month, some warlords also agreed to released child soldiers under their sway.

But the future of the men in Berengo is still unclear.

Patrick and his former brothers-in-arms hope that their refusal to abandon their makeshift barracks will pay off with uniforms and a regular wage.

Sickness has killed some of the fighters and others have given up on their demands -- but a determined core of holdouts remains.

They sleep on bare floors in decrepit buildings teeming with lizards and mosquitos and earn food by "doing work in the fields for local residents", according to a man known as Singe (Monkey).

They also beat mangos out of trees to sell at the roadside.

Asked if they will wait much longer for the chance to serve their country the response from Simplice Modem, a father of seven who has not seen his children in over two years, is a curt "affirmative".

The lucky ones receive visits from their family, while others try to keep in touch by telephone. "Our wives tell us to hold out," Patrick says. "They're say we're right, we shouldn't give up."

He asks his comrades to line up for a group photo in front of a huge statue of Bokassa.

The men shuffle into ranks, but their hearts are not in it. "We used to train before, we did sport," Patrick says. "But now we're too weak. We're not in shape."