Why Afoko And Kwabena Agyei Agyapong Must Resign! 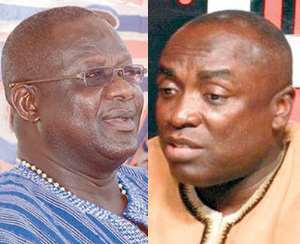 Six years ago the NPP began a journey through her political wilderness.

Through our actions and inactions, we condemned a nation that grew under us from HIPC to a Lower Middle Income status; and the people in it, to the care of an irresponsible, incompetent and permanently visionless administration.

We condemned every honest Ghanaian to a harsh drought of pain and suffering while elevating crass criminals and persons of shady and dodgy character to positions of trust and profit in Government.

We condemned our youth to eight unrestrained years of massive unemployment and our children to a hopeless future built on doubts, debts and fears.

We condemned our National Health Insurance System to the supervision of a Party that did not believe in it right from the word go; an administration which has since completely destroyed it.

We condemned our economy to death when we committed Ghana into the hands of a Government, led by a man, who knew only three words ‘tax, borrow and waste’ and even further condemned our nation when we allowed his successor to expand their economic lexicon to include the words ‘create, loot and share’.

We condemned our Security Services to petty partisanship, to a reign where men supposed to be neutral were, and are, turned into political zombies.

Generally, we condemned this nation, her people, her institutions, her values and everything that made her shine among her peers, made her an envy to those beneath her and the favourite child of hope for those who stood above her on the world stage, to an administration led by a man with a curious sort of Midas’ touch which turns everything he touches into rust, ruin and dust.

I say ‘we condemned..’ because we cannot as a Party deny any more our share of responsibility for the sorry state the nation is in right now.

But in 2012 we failed Ghanaians because we did not adequately and sufficiently protect the votes they entrusted in our care. We failed Ghanaians because we took one too many things for granted. We took the credible threats of rigging which we had heard from high-ups in the NDC for granted. We took the meetings which EC Officials were secretly having with NDC Officials for granted. Our lack of vigilance in 2012 caused the renewal, albeit illegitimately obtained, of the NDC’s mandate.

And therefore, when we look back at the havoc this nation has been through, and continues to go through, and when we reflect upon the fact that things should have, could have and would have been better under our watch, we should take some of the blame and bow our head in shame.

We allowed the worst Government ever in our country’s history to be constituted because we lacked a sense of compassionate politics in 2008 and lacked vigilance in 2012.

The Government has been terrible these past six years. It has broken our backs with loads of taxes and charges and our spirits with insults, arrogance, lies and deception. It has legitimized corruption and rewritten our national values.

At no point in time has the black star of Ghana flown so low as it has under the Mahama Administration.

Signs are that the worst is yet to come in the two years they have left.

Inflation, the untamed thief of savings, has already been set loose and signs are that it would be radicalized even more in the years ahead. The Cedi has never gained her footing these past six years and doesn’t appear to even be looking for her footing under this administration. What was once a risk of massive unemployment fuelled by a massive layoff of workers has now been turned into a grave reality waiting to happen.

What is worse than eight years of any NDC rule is four more years of such rule. This nation simply cannot survive that!

And it is for this reason that among real patriots, both in the NPP and in Ghana, there is an unquenchable desire to end the Party’s long vacation in the wilderness of politics. The moral obligation and the civic duty to rescue this country from the mess we inadvertently got it into being undeniable, there was a great duty on delegates to act by electing a new crop of Executives.

It was for this reason that delegates at the Congress to elect National Executives voted for Paul Afoko and Kwabena Agyei Agyapong who they believed at that time appreciated the needs of the Party.

They were made to believe that Messrs Paul Afoko and Kwabena Agyei Agyapong appreciated the urgency of the times and the burden it placed on them.

Both delegates and the rest of Ghanaians have been completely disappointed in the leadership of those two.

They have been nothing but an unmitigated bane to the Party and now represent a credible threat to the Party’s Agenda in 2016. They have shown more commitment to matters bothering and affecting their egos than to matters of Party interest.

They have become a force, a minority but vicious force, of disunity in the Party. They have elevated themselves to the position of King and Law- makers- in the Party against the spirit and the letter of the Party’s Constitution as well as the traditions of the Party.

Of course, they can take the risk of calling for a referendum on themselves if they still bear any doubts as to their support base in the Party.

They are out of touch with the real needs of the Party of this material and critical time. They do not get what would be at stake in 2016; they think it is just the Presidency and therefore can have the luxury to engage in a battle of ego.

They fail to see that it is the lives of millions of ordinary Ghanaians that we are talking about.

These failures make them incompetent as it makes it unconscionable for them to continue to stay in office.

I support calls, therefore, to bring all legitimate pressure on them to resign or tamed. I believe they must and should resign barring which they should be impeached under the relevant clauses of the Party’s Constituion.

No person must be made to stand in the way of the Party’s interest.