Nana Suers Are Just So Dumb Or Just Being Mischievous 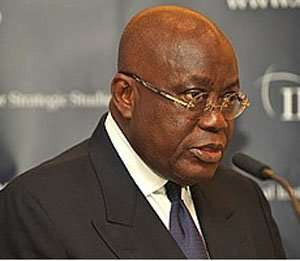 Nana addo SUERS on the case of him, nana addo keeping state vehicles after his move from a ministerial position, at court are truly either so DUMB, even more dumb than a dead body in the physical world, much respect to the dead though (a dead body can answer no question in this physical world, not even the simplest such as 1+1) or just want to act more MISCHIEVOUS than KWEKU ANANSE in an ANANSE STORY in this world.

I so much believe in this view of mine because of my reasons below;

A. How can anyone accuse a person who wasn't collecting salary, per diem, fuel allowances, other allowances and incentives due him for more than 12 years but rather donated to it all to charity especially the children homes and others, seek to hijack state vehicles?

How is this possible? Couldnt these salaries, per diems and others he donated to charity together have bought more of these cars for his personal use?

B. How can you accuse nana addo of such a thing when the late Ex-President Prof Mills issued an apology to Nana addo in 2009 when the national security forcifully and shamefully took his vehicle from him, of which they thought was one of the state vehicles he has hijacked which unknown to them, he had returned them all.

The reasons I have given shows that, this movement by his SUERS is very illogical, it contradicts all concepts/topics under logical theorem under mathematics.

So from the above, I can say the SUERS ARE EITHER just being MISCHIEVOUS for a POLITICAL gain of theirs or are just over DUMB and so a total ignorance of all facts regarding this matter.

Bagbin’s new look is cool if only he won’t get carried away ...
59 minutes ago