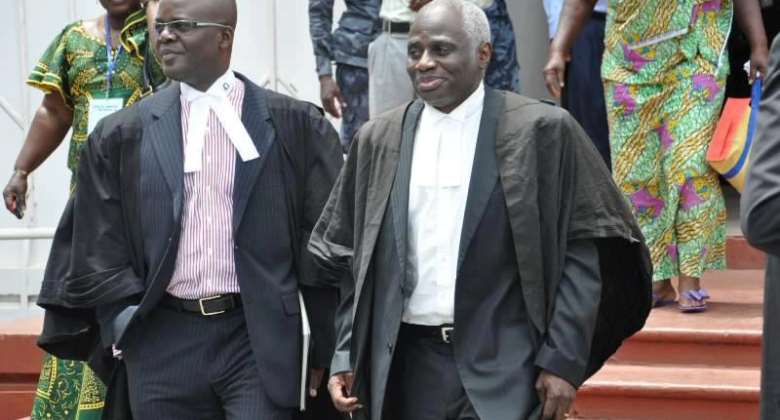 I have read the Daily Graphic (graphiconline) publication of 14th March 2015 in which Mr. Tony Lithur denies rumours that he has been defending businessman Alfred Agbesi Woyome in Court. The facts as I know them are that there is no evidence to allege that Lithur, Brew and Co were ever lawyers for Alfred Agbesi Woyome. But the fact is that Lithur, Brew and Co were lawyers for Austro-Invest Management Ltd a foreign registered and wholly owned company which was a joint beneficiary with Woyome in the over GH₵51million unconstitutionally paid by the NDC Government through its financier, Woyome.

Consequently, when Ray Smith, the sole shareholder of Austro-Invest whom Mrs Brew Appiah-Oppong, the Attorney-General, and Tony Lithur know has been resident in Ghana all along and instructed them in civil cases to retrieve his share of unpaid balance from the over GH51million to Woyome is not treated as a suspect in the criminal case, Ghanaians are at liberty to make whatever conjectures their minds give rein to. The relationship of Lithur, Brew and Co as private lawyers to the President of the Republic of Ghana, the appointment of Mrs. Brew Appiah-Oppong as the Attorney General by the same President to oversee amongst other things sensitive cases involving his Government requiring impartiality such as the constitutional and criminal cases affecting Woyome and his associates in which the NDC clearly has a vested political interest as a Government, are issues only a population of rabble citizens will overlook.

The letter dated 18th August 2009 signed by Woyome on behalf of Austro-Invest and on his own behalf and addressed to the then Attorney-General, Mrs. Betty Mould-Iddrisu, making claims for the now unconstitutional payments were made on their joint and several behalf. Austro-Invest through its sole shareholder Raymond Smith (Ray Smith) a British citizen resident in Ghana signed an agreement on 16th February 2010 with Alfred Agbesi Woyome for the purpose. The sum of over GH₵51million was unconstitutionally paid by the NDC Government of Ghana to Alfred Agbesi Woyome for the benefit of Austro-Invest and himself.

It was because the unconstitutional payments were made for the joint benefit of Austro-Invest and Alfred Agbesi Woyome that my original Writ and Statement of Case was issued on 22nd June 2012 with Austro Invest as the 3rd Defendant and Alfred Agbesi Woyome as the 4th Defendant. At the time I issued the Writ I had documentary evidence of civil actions and applications made by Lithur, Brew and Co as lawyers for Austro-Invest in the High Court, Accra. Lithur, Brew and Co was acting upon the instructions of Ray Smith, a resident of Accra who had deposed to affidavits in the High Court, Accra. Mr. Ray Smith is also the shareholder and Managing Director of M-pawapak Ltd a Ghanaian company in which Alfred Agbesi Woyome acted as an alternate director. I could not serve the Writ and Statement of Case on Austro-Invest as the 3rd Defendants through its sole shareholder, Ray Smith at their M-pawapak, Accra address.

The Supreme Court eventually granted me an order for substituted service by registered post on Austro-Invest's address in Zug, Switzerland. DHL returned the parcel undelivered to the Registrar of the Supreme Court who had mailed it because the address used by Austro-Invest in its dealings with the Government of Ghana did not exist. Lithur, Brew and Co could not ethically be acting as lawyers to a non-existing foreign company in the High Court. Consequently, I caused a search to be made first in the United Kingdom and then confirmed in Switzerland for the avoidance of doubt on Austro-Invest.

It was the search results that showed that Austro-Invest with Ray Smith as sole shareholder and principal director had been liquidated on 26th July 2011. I then applied to the Supreme Court to grant me leave to serve the processes on Ray Smith personally in Ghana as the alter ego of the company. Unfortunately the Supreme Court took the view that since Austro-Invest had been liquidated in Switzerland it could not exist in Ghana even if it was illegally suing in the High Court. The action against Austro-Invest, as the then 3rd Defendant was therefore struck out as withdrawn.

I had, however, established that at the time Lithur, Brew and Co were acting as lawyers for Austro-Invest upon the instructions of its sole shareholder, Ray Smith, resident in Ghana Austro-Invest had ceased to exist as a Limited liability company in Switzerland and could not therefore sue in the High Court in Ghana. The substance of the High Court suit was a claim for part of the unconstitutional payments made for the joint benefit of Austro-Invest and Alfred Agbesi Woyome. Apparently Alfred Agbesi Woyome had retained part of Ray Smith's share of the over GH₵51million on the ground that he alone bore the expenses in connection with pursuing and obtaining the payment of the money made by the Government.

The role played by Lithur, Brew and Co as lawyers for Austro-Invest which they knew had been liquidated was what moved me to complain to the Supreme Court about what I perceived to be the professional misconduct of Lithur, Brew and Co in holding out a liquidated foreign registered company as one having capacity to sue and be sued in Ghana. They had a duty to have satisfied themselves on the legal persona of Austro-Invest before issuing and continuing any suits and applications against Woyome in the High Court. Lithur, Brew and Co. could be liable with Ray Smith for abetment of perjury for the affidavits deposed by Ray Smith and filed in the High Court by them on his behalf. With Mrs. Brew Appiah-Oppong having been appointed the Attorney General it was futile for me to make any report to the police and so I brought this matter to the attention of the Supreme Court in an application for directions. An adverse comment on the conduct of Lithur, Brew and Co from the Supreme Court bench was published in the media at the time.

In spite of the enormous financial expenses and problems I faced dealing with the service of the Writ on Austro-Invest and the eventual discovery that Lithur Brew and Co were aiding Ray Smith of Austro-Invest to abuse the processes of the High Court in suing a Writ and processes knowing that Austro-Invest had ceased to exist on 26th July 2011, I salvaged the Woyome case by amending my Writ with leave of the Supreme Court. I did not leave Austro-Invest out altogether because of the historical fact of their participation in securing the unconstitutional payment for their benefit. Consequently, my amended claims which the Supreme Court granted in my review application on 29th July 2014 included the demonstration that the client of Lithur, Brew and Co, Austro-Invest, was inextricably linked and interwoven with Woyome in the unconstitutional payment of the GH₵51million by the Government of Ghana. The involvement of Austro-Invest in the GH₵51million Gargantuan scam by Woyome and Austro-Invest facilitated by the NDC Government against the Republic of Ghana is brought out clearly in the unanimous decision of the Supreme Court delivered on 29th July 2014 as follows:

“BY COURT:
By a unanimous decision of this court, the application for review succeeds and is hereby granted. Consequently, the applicant is entitled to have the decision of the ordinary bench reviewed in the following terms:

1. A declaration that conduct of the then Honourable Attorney General, the 1st Defendant Respondent, in this case in paying or ordering the payment by the Republic of Ghana of claims by the 3rd Respond and Austro-Invest, premised upon a purported foreign or international financial engineering agreement arising out of the agreements dated 26th April 2006, and other international business agreements with the Government of Ghana which were never laid before Parliament for approval is inconsistent with and in contravention of Article 181 (5) of the Constitution 1992 in terms of the interpretation already rendered by the ordinary bench and are according null, void and without effect whatsoever.

2. A declaration that the High Court which purported to and assumed jurisdiction in the action commenced by the 3rd Respondent (as Plaintiff) on 19th April 2010 in Suit No. RPC/152/10 against the 1st Respondent claiming damages for breach of contract in an international business transaction contrary to Article 181(5) of the Constitution 1992 and entered judgment in default of defencce against the 1st Respondent, therein, 1st Defendant, acted without jurisdiction; consequently those proceedings and others consequent upon the said proceedings and orders of the High Court are hereby declared null, void, and without effect whatsoever.

3. A declaration that the conduct of the 3rd Respondent, therein Plaintiff, jointly with Ausfro-Invest (sic) Management Ltd in making claims upon and including the issuance of a Writ of Summons with the support of the 2nd defendants therein and receiving payments premised upon alleged breaches of the two inoperative agreements dated 26th April 2006 between the 2nd Defendant and the Government of Ghana, which are international business or economic transactions which had not been laid and approved by Parliament is inconsistent with and in contravention of Article 181 (5) of the Constitution.

4. An order directed at the 3rd Respondent herein to refund to the Republic of Ghana all sums of money paid to him upon or as a result of the unconstitutional conduct of the 1st Respondent, therein 1st Defendant in purported pursuance of the said inoperative Agreements dated 26th April 2006.

We make no relative orders to costs in these proceedings.”

The perception I have come away with in my handling of the Constitutional cases against the Attorney General, Waterville, and Woyome/Austro-Invest is that the John Dramani Mahama NDC Government under its Attorney General, Mrs. Brew Appiah-Oppong has at every step done everything in its power to impede the success of the cases. I had made it clear to the Mills/Mahama Government as its Attorney General that no prosecution in the scam involving the over GH₵51million will succeed by targeting Woyome alone without Waterville, Austro-Invest, Samuel Nerquaye-Tetteh, the Chief State Attorney whose spouse EOCO reveal had received GH₵400,000 from Woyome while he was handling the case as an Attorney for the Government, and others. I had suggested that Mrs. Betty Mould-Iddrisu should be persuaded to be a prosecution witness in lieu of prosecution.

The Government disagreed, so I was removed from office. But Woyome did not walk into the Bank of Ghana with an AK 47 or a Bazooka to take the over GH₵51million from the Government of Ghana. Mrs. Brew Appiah-Oppong had all the opportunity to have done the proper professional thing upon becoming the Attorney General and assuming the prosecution of the case in spite of her past association with Austro-Invest at Lithur Brew and Co. She failed woefully in this regard as the evidence before the nation in this matter to-day demonstrates.

Can Ghanaians then be faulted in speculating that the relationship between Lithur, Brew and Co as lawyers for President John Dramani Mahama, and Austro-Invest represented by Ray Smith together with the NDC Government's interest in protecting itself and the powerful persons with the insurance of being card bearing NDC supporters involved in this Gargantuan scam is the fundamental reason for the unprofessional manner the criminal and constitutional matter in this scam have been and are still being handled by the Government?

The substance of the displeasure of former President Rawlings with the manner the NDC and the Government has handled this matter cannot, in my view, be faulted. I find it impossible not to link Austro-Invest, the main accomplice in the over GH₵51million scam with the kid gloves with which Ray Smith has been treated and protected by the Attorney General and the unprofessional manner in which Woyome alone has been prosecuted in the criminal matter with the role of Lithur, Brew and Co as lawyers for Austro-Invest.

Deadline for debt exchange programme may be extended again –...
25 minutes ago