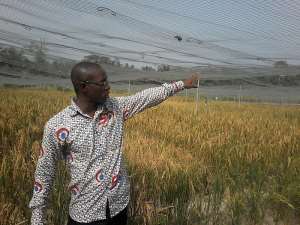 Researchers in Ghana say they are recording favourable outcomes in the trials of genetically modified (GM) rice in the country.

The confined field trials started in April 2013 at Nobewam in the Ashanti region, after receiving approval from the National Biosafety Committee (NBC).

The fourth successive experiment of the Nitrogen Use Efficiency (NUE) rice is being conducted by the Crops Research Institute (CRI) of the Council for Scientific and Industrial Research (CSIR).

Principal Investigator, Dr. Maxwell Asante, says the project has already identified a lead event which will give at least a 15percent yield advantage over non-GM version of the planted rice.

“If the lead event is confirmed, we will request for permission from the NBC to allow it to be grown by farmers in Ghana after testing. The genes that make the GM rice nitrogen-use efficient will then be transferred to other varieties in Ghana through conventional breeding methods,” he stated.

There is strong opposition to the introduction of GM crops in Ghana's food production chain.

Biosafety advocate, Albert Aubyn, however says there is no cause for worry with the current trials, noting that field activities are strictly in conformity with regulative measures.

“Not until the experiment has proved that it is safe for humans to use, what we do is that we make sure that in this case of rice, pollen doesn't flow out to pollinate other related crops,” he said.

Ghana spends over $500million annually in rice importation, in addition to huge foreign exchange in the importation of other food items.

“Biotechnology is cutting-edge technology that can help us in our quest to improve food security,” said Dr. Stella Ennin, Director of the CSIR-CRI. “Fertilizer is very necessary for our plants, yet the cost is so high and our farmers cannot afford it; so we are going around the system to find varieties that can produce a good crop of rice with minimum nitrogen fertilizer applied and we are using the science of GMO.”

The next set of experiment will involve the evaluation of the triple-stack gene rice plants to identified lead events in nitrogen-use efficiency, water-use efficiency and salt tolerant genetically modified rice – dubbed “NEWEST Rice”.

This will especially help farmers deal with the effects of climate change and expand rice cultivation to areas previously not supported.

Ghana's GM or NEWEST Rice is projected to go commercial within the next three to five years.

Three confined field trials of rice, cowpea and cotton are currently being evaluated in Ghana in compliance with the Biosafety Act 2011, Act 831, which regulates GMOs.