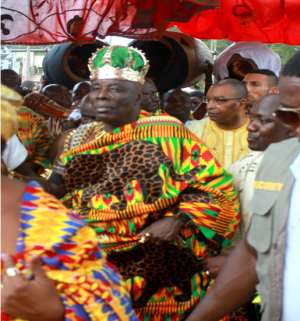 On the 17th of March, 1999, the ancient but powerful kingdom of Akyem Abuakwa was thrown into a state of mourning as the Ghanaian media announced the death of Osagyefuo Kuntunkununku III, the Okyenhene as at the time. As customs of the kingdom postulated, new king could only be enthroned after the dead king's burial which was to take place some four months later, the same year.

There was media jostling as to who would be the rightful candidate to inherit and build upon the legacy left by the late Osagyefuo Kuntunkununku III and past kings of the kingdom alike. Several names popped up including Odehyee Kwame Amoatia Ofori Atta who was finally selected and installed as the new king of Okyeman on the 4th of October, 1999.His final coronation on the 11th October same year with the stool name Osagyefuo Amoatia Ofori Panin beaconed a new dawn of leadership in Okyeman.

As he celebrates fifteen years milestone as the 35th king of Okyeman with a grand durbar to coincide with the Odwira festival this December, this feature takes a look at the journey of fifteen years including the feats chalked by Osagyefuo as well as the very glaring challenges over the period of his reign. As already stated in the preamble to this article Osagyefuo Amoatia Ofori Panin ascended the great Ofori Panin stool of the Asona dynasty on the 4th of October 1999 after an eventful reign of the late Osagyefuo Kuntunkununku III. On ascending the Okyeman throne, he vowed to bring real development to his people with emphasis on child education, environmental protection, and improved healthcare among others.

The Okyeman Environment Foundation had gained recognition from both far and near with awards like the Green Apple presented at a prestigious ceremony hosted by the British Trade Secretary, Patricia Hewitt, at the House of Commons in 2003. Osagyefuo was also presented with awards in environmental protection achievements by the Ghana Institute of Surveyors in 2004 as well as the Millennium Excellence Awards Foundation in 2010.

Achievements in education and child welfare, Osagyefuo Amoatia is staunch advocate of child education. This advocacy led to the institution of the Okyenhene 'Mmofra Afahye' in 2001. This is marked annually with a durbar of school pupils usually from Okyeman, activities for the festival includes cultural performances, poem recitals both in English and Twi among others with awards presented to best performing pupils. This year's activities drew school pupils from Okyeman and Akuapem with four children awarded the Osagyefuo scholarship to cover their education to the tertiary level.

The Okyenhene has also established a scholarship scheme to help brilliant but needy school pupils in Okyeman christened “Boa Baako boa Oman” Educational fund to achieve basic education and beyond giving meaning to his education for all school children in Okyeman mantra. Indeed, Osagyefuos' believe in higher education as a key tool to development has culminated in the establishment of a university, the first of its kind by any traditional authority in the country at Bunso in the Eastern Region in 2009. The university placesemphasis on environment and agriculture studies very dear to the heart of the King. The University is expected to be officially outdoored in November this year

Health Achievements, with a strong passion for good health practices among his people, the Okyenhene is also a staunch sanitation advocate culminating in his operation cleaner and healthier communities' campaign. He also established an AIDs foundation in 2001 to manage the education and campaign against HIV/AIDs and undoubtedly demystify the stigma associated with the disease. He also instituted the Okyeman HIV/AIDs education week to be held annually to coincide with the World Aids Day.Activities for the education week includes HIV prevention campaigns and workshops, testing for the disease as well a marathon race. In 2001, he broke an ancient tradition that barred chiefs from running and led 5km run and also tested for HIV/Aids in public, a feat he is the first major African traditional ruler to chalk. Osagyefuo also commissioned an Asthma center in 2011 at the Kyebi government hospital to provide specialized care for chronic asthmatic patients.

Key challenges that have characterized the reign of Osagyefuo are issues of galamsey and chieftaincy disputes in Okyeman. Galamsey activities have been the greatest bane of Osagyefuo's environmental campaign. He has always condemned the wanton destruction of vegetation and land degradation as well as the pollution of the river bodies on every platform in the past 15 years but his call seems to have fallen on deaf ears as far as these illegal miners are concerned. The Birim river the once the pride of the people of Akyem descent is now highly polluted and a pale shadow of its former self. The river's course is always diverted by these aggressive miners leading to flooding in parts of Akyem in the recent past.

It would interest readers to know that the Okyenhene stood against Bauxite mining in the Atiwa forest reserve but rather advocated that the forest be turned into a national park touting the advantages of eco-tourism compared to mining. However, his environmental protection campaign was nearly hurt to the brink in 2011 when an Asona royal of Kyebi linked him to illegal mining the very activity he had stood against. His accuser failed woefully to substantiate his claims against the king shaming the king's detractors. Despite this challenge, the Okyenhene remains unfazed on his quest to protect the environment against illegal mining,lumbering and other activities that destroys the environment.

Another key challenge area has to do with chieftaincy disputes in Okyeman, communities such as Kwabeng,Anyinam,Asamankese, Kade,Akyem Nkwantanang, Achiase,Asiakwa among others are all engulfed in chieftaincy disputes hampering development of these communities in the process. The Okyenhene and his able traditional council are relentlessly committed to bringing peace to these affected communities.

Beyond these challenges, the reign of Osagyefuo Amoatia Ofori Panin, the Asona Piesie and Kwaebibirimhene (king of the forest) can be said to be that of an exemplary one. Right from his enstoolment in 1999, he has collaborated with many dignitaries across the globe including the former UN Secretary General Kofi Annan, Prof. Jeffrey Sachs of the Earth Institute to bring about development not only to Okyeman but Ghana as a whole. He met the chairman of the Global Environmental facility Mohammed El-Ashry and secured funding to promote environmental protection in Okyeman. Osagyefuo met the Prince of Wales, Prince Charles and serves as an advisor on the Prince Charles Rainforest Project. He has also featured in many conferences across the globe and shared platforms with global dignitaries as well as been the guest of many dignitaries likewise. He was the special guest for the U.S. Congressional Awards, guest speaker for the Silver Jubilee Celebration, Art of Living Foundation,guest of the Laureus Sports Awards and the Formula 1 Race, Monaco, Spain etc.

Osagyefuo has held several positions and also a patron of many organizations. He chaired the board of the Environmental Protection Agency from 2002-2008, chairman of the forest plantation development fund board from 2004-2008. He is also the chairman and patron of the Ghana Society for the Blind, the honorary vice chairman for BirdLife International and also the patron for the Charities Aid Foundation West Africa, Ghana Eye Foundation, Ghana Substance Abuse Recovery Programme,Students in Free Enterprise Programme (SIFE) among others.

Osagyefuo, an ardent golfer and an Old Abuscodian was born in on the 10th of December, 1952 and holds a degree in Political Science and Public Administration from the Hartford University, Connecticut, United States of America. He took up an insurance career and was an Insurance Broker and Office Manager of First Elizabeth International Brokerage, 1993 – 1998 before returning home to ascend the Ofori Panin stool. He is husband to Elizabeth Asabea Ofori Atta and father of two boys.

As he climaxes his 15th anniversary on the 13th of December, 2014. I take this opportunity to invite all and sundry to witness this celebration and also congratulate Osagyefuo the Okyenhenefor a successful decade and half reign and even wish him a more successful reign in the years ahead. God bless Okyenhene, Okyeman and Ghana!